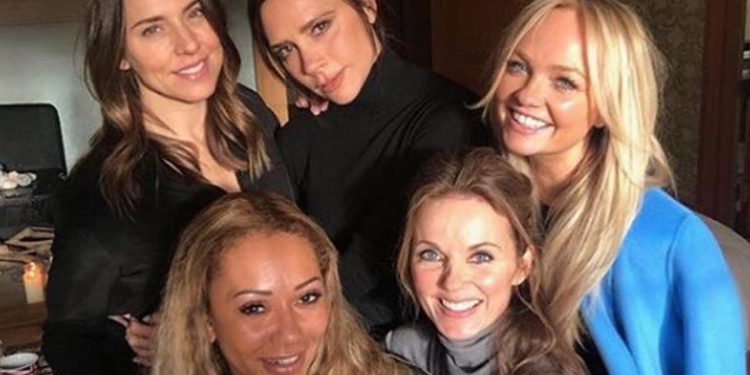 
Spice Girls fans had been hoping to see Geri Horner, Mel B, Victoria Beckham, Emma Bunton and Mel C in action once again but the latest plans to reunite the fivesome have been scrapped, according to sources

Spice Girls fans hoping to see the band back together as a fivesome once again will be bitterly disappointed to hear that the band have gone their separate ways… again.

According to reports, upcoming plans for a tour and a movie about the iconic girl group have been scrapped.

Geri Horner and Mel B were said to have been the driving force behind the hugely successful 13 date reunion tour in 2019 – which climaxed with a string of sellout gigs at Wembley Stadium but haven’t been able to muster the same enthusiasm for more dates.

Hopes to reunite the 90s girl group – possibly with the elusive Victoria Beckham in tow – are said to have stalled.

“It was going brilliant — but Covid killed the momentum,” a source told The Sun.

“Now it’s done again. There’s nothing on the agenda and they’re focusing on their own things.”

The last tour proved to be a huge hit with Mel B excitedly announcing plans to perform to fans in Australia on the final night.

Amid the hype, it was later reported the band were also working on an animated film, with Posh Spice Victoria said to be keen to be involved.

Early whispers hinted the fivesome would be portrayed as superheroes trying to save the Girl Power movement, which they were huge advocates for in their 90s heyday.

However, it’s now said that the girls are preferring to focus on their individual projects instead now.

It remains unknown whether the five will still get back together at Brooklyn Beckham’s upcoming wedding as hotly rumoured.

It has been years since Scary, Sporty, Ginger, Posh and Baby have all been in the same room but mother-of-the-groom Victoria is said to have reached out to her former bandmates to ask them be a part of the Beckhams’ special day.

Budding chef Brooklyn, 22, is due to marry 27-year-old Nicola Peltz this year, with speculation rife that they could be getting hitched in April.

The ceremony is expected to take place at Nicola’s family’s estate in Florida on April 9.

Other famous faces on the rumoured guestlist are Elton John, Gigi Hadid and Gordon Ramsay.

Getty Images for The Met Museum/)

Melanie C last month spoke about a possible Spice Girls reunion, insisting that all her bandmates ‘all passionately want to do it’.

She told OK! Magazine : “I tell you something, there will be if I’ve got anything to do with it.”