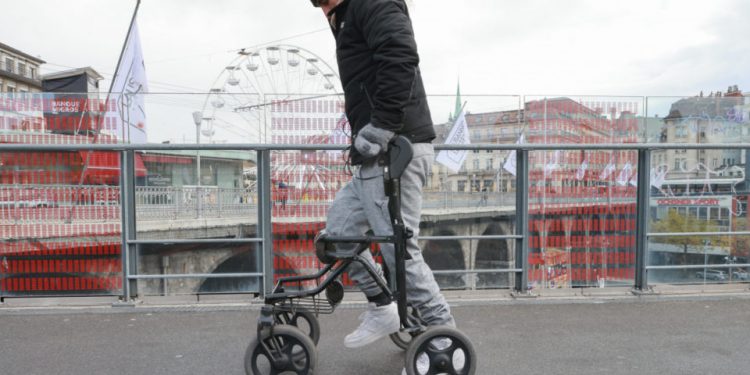 
Michel Roccati was paralysed from the waist down in a motorbike crash in 2017. As per the awful script for such a situation, Mr Roccati was told he’d never walk again.

Five years later, after the surgical implantation of 16 electrodes into his spine and legs, Mr Roccati took to the streets of Lausanne for a stroll using his walker-chair for support.

Attached to the walker were two small remote control devices. These were connected wirelessly to a tablet that forwarded signals to a pacemaker in his abdomen that stimulated specific neurons.

Now it was up to Mr Roccati.

He pulled himself up from his chair, and pressed a button on the left side of the walker, allowing him to lift his left leg, and to drop it a few centimetres forward, as one does when stepping out.

He pushed a button again, and raised his right leg. Slowly, with great concentration, he walked down the street.

This wasn’t his first stroll, just the first taken in public, in December, as a publicity exercise for a revolutionary system developed by French neuroscientists that uses electrical stimulation to reactivate spinal neurons in people who have been paralysed through catastrophic injury.

This week, footage of Mr Roccati taking these steps has been published worldwide. But the freedoms afforded him go beyond supported walking.

Mr Roccati says he uses the implanted device for one to two hours a day, and this relieves him of the pain of sitting down all the time.

Depending on which stimulation program he chooses to make use of, Mr Roccati can go for walks on his own, cycle and swim.

The device also allows him to stand at a bar and have drinks with friends, which may seem like a modest gain.

But to anyone who has spent time in a wheelchair, and been forced to always look up into the faces of companions and strangers, who has felt that frustrating sense of remove, to be standing on his own feet is enormously psychologically liberating.

“The first few steps were incredible – a dream come true,” Mr Roccati said of the first time he walked, in a laboratory setting.

“I’ve been through some pretty intense training in the past few months, and I’ve set myself a series of goals. For instance, I can now go up and down stairs, and I hope to be able to walk one kilometre by this spring.”

Mr Roccati’s age hasn’t been revealed (nor have details of his private life) but he is one of three paralysed men who have undergone the implant surgery and learnt to walk again. They are reportedly aged from 29 to 41.

Who are the scientists?

Professor Grégoire Courtine is a neuroscientist at the École Polytechnique Fédérale de Lausanne. With Dr Jocelyne Bloch, a neurosurgeon at Lausanne University Hospital in Switzerland, Dr Courtine developed this system of implants that activates the trunk and leg muscles.

In 2018, they unveiled their first success: A man named David Mzee, who had been left paralysed by a partial spinal cord injury suffered in a sports accident, got up from his wheelchair and began to walk with the help of a walker.

Since then, the scientists have refined their system which had allowed the three male patients, all of whom suffered paralysis from complete spinal cord injury, to walk again outside the lab.

“Our stimulation algorithms are still based on imitating nature,” says Dr Courtine.

The refined system uses new, soft implanted leads that are designed to be placed underneath the vertebrae, directly on the spinal cord.

“They can modulate the neurons regulating specific muscle groups,” he says.

“By controlling these implants, we can activate the spinal cord like the brain would do naturally to have the patient stand, walk, swim or ride a bike, for example.”

In the next stage, the system will feature 32 implants instead of 16, further refining the movement, and stepping a little more closely to nature.

A paper detailing the system has been published here.