Squardle Broke My Brain, and Then I Won 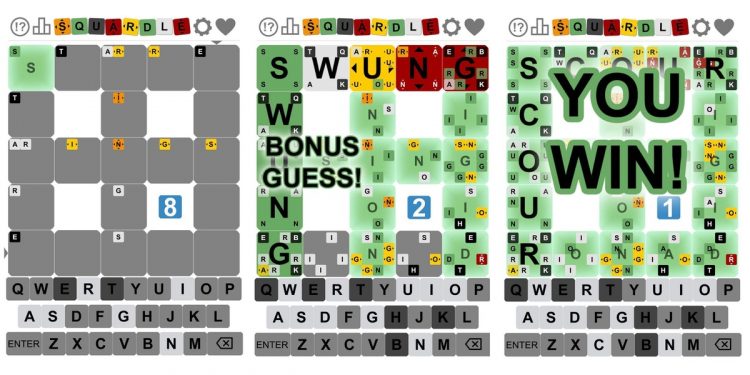 I thought Waffle was unique: six Wordles in a grid, solvable in 10 to 15 guesses. But after I wrote about it, reader Carl Knecht tweeted that “Waffle gives you the letters, Squardle makes you work for [them].”

I clicked, and it was true. Waffle is like a Rubik’s cube. Letters are provided, and your job is to make crafty swaps. It’s elegant, and so simple it doesn’t require a keyboard. If you’d like to get into square Wordles (which I am now sure will have their own variations on variations), Waffle is a good one to start with.

And once you’re hooked, I’d like to drag you further into the depths of confusion and despair. Play Squardle with me.

You can find Squardle here. The first clue that you’re in for an adventure is the length of the explainer. Instead of just a few pointers (green means you got it right, yellow means it’s somewhere else in the word) you are given extensive coaching, the kind that makes you say “uhh…just show me the board.” And then you see the board. And then you wish you had paid more attention.

You get 10 guesses to start with. Every time you guess, you’re given a row and column to put your guess into. (Look for little pointers at the top and side of the screen.)

How to win at Squardle

In more typical Wordles, you often feel like you don’t have enough information. There are 26 letters in the alphabet and at any moment you probably only have information about five or ten of them. But in Squardle, you get so much information it can be tough to know what to do with it all. Little red, orange, yellow, black, and white squares all shout clues at you, and you’re caught in the middle unsure how to make sense of any of it. Or at least that was my experience.

I did end up winning my first game, but not until I had nearly given up several times. So of course I tried a second game, thinking I had gotten the hang of it. (With Waffle, you’ll recall, my first game was tough and my second got me a perfect five-star ending.)

Instead, Squardle feels like one of those movies that has the moment near the end where all is lost, and you cry into your popcorn, and then slowly, little by little, things start to turn around and the characters triumph. Playing a second game is like turning around and going back into the theatre knowing that you’re going to cry all over again.

Three games in, I have two main strategies to suggest:

You’ll need to alternate between the two strategies to successfully solve the puzzle. Good luck, and if you know of a more painful game than this, please share. I’m ready to get hurt again.