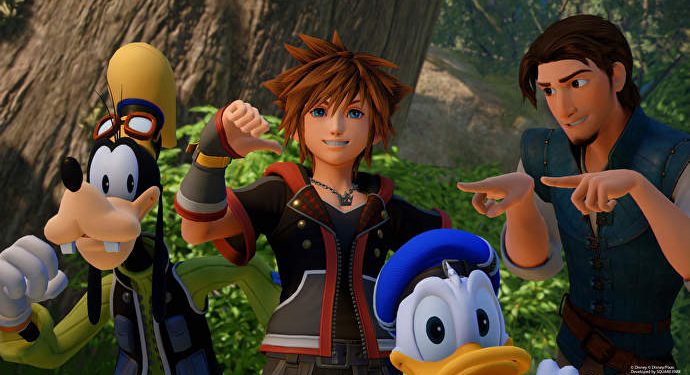 
Finally, Kingdom Hearts is available on Switch. You can now experience the adventures of Sora (y’know, the final character to be added to Smash Bros. Ultimate) on Nintendo’s beloved hybrid console. But you know what? It sucks.

The games are good, don’t get me wrong. The Kingdom Hearts series is an important one in many respects, having broke new ground in terms of helping the company that built Final Fantasy to master live-action RPG combat while partnering them with arguably the most important intellectual property owner in the world. The games tell a convoluted, but ultimately lovable, coming-of-age story that pretty much anyone can relate to – and if you have a sense of nostalgia for any of Disney’s biggest movies, you’ll fall in love with at least a couple of the game’s worlds. So, what’s the problem?

Well, it’s all about cloud. Not the one from Final Fantasy, who appears in the KH series as a brooding mercenary. This is the cloud that the games run on. You see, the Kingdom Hearts titles on Switch aren’t running natively on the machine – they’re a cloud-only release. You buy the games, but then whenever you boot them, they’re being streamed to you over the internet from some centralized, more powerful hardware running it from afar.

On paper, there’s nothing wrong with cloud gaming. We’ve been impressed with Microsoft’s Xbox ‘xCloud’ service, and I’ve got a lot of time for Nvidia’s GeForce Now. PlayStation has its version, too. But there’s a difference here. These services are all used as an option; to squeeze in a bit of exploration of Sea of Thieves when you’re waiting in the doctor’s office, or to stream Evil Genius 2 to your TV rather than playing it on your PC. You still have the option to hop back over to native hardware and to all the benefits that bestows.

Not so for the Switch’s cloud-based game releases. Kingdom Hearts isn’t the first, for the record – Control, Hitman 3, and a smattering of other titles released on the machine this way, and Square Enix’s own Marvel Guardians of the Galaxy game did the same. There’s a difference in these games, however: they’re all full-fat new-generation games that would otherwise likely be impossible or very, very difficult to shrink to the Switch.

Kingdom Hearts 1.5 HD remix was a remaster first released on PS3 in 2013, including the first Kingdom Hearts plus spin-off Chain of Memories. A PS4 version was released in 2017, but was functionally identical. Kingdom Hearts 2.5 HD Remix landed in 2014, again for PS3, following the same port trajectory. That one includes KH2, plus a remaster of Birth By Sleep, a PSP title.

These games are the sort of titles that should be natively running on Switch. There is no excuse. The others, I understand – Kingdom Hearts 3 and 2.8 (its prologue chapter) were PS4 releases – and particularly lavish-looking ones at that. It might not be possible to get those to shrink down to Switch, and even if it were, it might be too much work to be profitable. As a result, I’ll even let the HD Remaster of 3DS title Dream Drop Distance go, as (while that too should run on Switch) it’s part of the 2.8 package. So – let’s set those games to one side for a moment. I’m still mad about KH 1.5 and 2.5. It’s ridiculous.

Over on PS4, you can pick up the ‘Kingdom Hearts All-in-One Package’ on a disc for £45, which includes all of the same games, but in a format you can run natively on your console. That’s RRP, by the way; deals on it are commonplace.

That PS4 package also delivers the games in what is undoubtedly a better format. It’s one that can be played without an internet connection, and in a format that will continue to work even after servers are switched off. In charging £80 for these Cloud versions, Square Enix is essentially charging almost double the price of the PlayStation version for what, ultimately, is a rental. One day, the servers running these versions of these games will be terminated, and that’ll be that.

The games aren’t out yet, but Square Enix has put out playable demos, presumably to placate those who might be concerned that the cloud stuff won’t quite work right. And, well, I don’t know what to tell you; the cloud stuff works, with its drawbacks. A lot of the time, it’s like watching a YouTube ‘let’s play’ of the game, with obvious compression artifacts, crushed blacks, and inconsistent pacing as the streaming does a back and forth. Switch OLED owners or those with the ethernet adapter will have better results playing wired , but I experienced choppiness on a gigabit connection – with the Switch wired in – regardless.

Mileage varies with the games, too. The simpler, cleaner (pun unintended) PS2 games fare better than KH3, which with its ramped up detail and intricacy gives way to streaming muddiness far more easily. But that’s something you can accept and understand in the case of games that otherwise wouldn’t be likely to run on Switch at all. That simply isn’t the case for most of these games. If this package had included native ports of the first two games but cloud for the others, I’d have understood, and even accepted the price. Instead, all of the games are compromised, and it’s still expensive.

I don’t know why this has happened, but I can take a guess. I think probably the actual Kingdom Hearts team in Osaka is full-steam-ahead on the next Kingdom Hearts title, and though there was a desire to port the games to Switch, there for some reason wasn’t the bandwidth to do this internally or a willingness to farm it out to an external studio. So we get this shitty, messy compromise. I understand porting games is hard work, but the market is clearly there for these titles on Switch; the excitement for Sora in Smash proved it. There’s little excuse for a PS3 game to not be ported natively to Switch – leave alone PS3 ports of PS2 and PSP games.

Anyway. The games are playable on Switch; congratulations and well done to all involved. It’s not a version anyone should be aiming to play, though. You can’t even take Kingdom Hearts on a flight, or a train – one of the great joys of Switch ports – because you need a constant, stable, and fast internet connection. It feels practically pointless. Maybe people will get a portable KH fix via Steam Deck and other portable PCs once the Epic exclusivity of the games ends on PC. If you just want to play these games, you can get better versions, without the streaming artifacts, significantly cheaper. Streaming is a great means to an end when a game is fundamentally incompatible; that excuse doesn’t wash for these PS2/3 games.

This is sort of par for the course with Square Enix, I guess. I’m getting bored of the coin flip with their important legacy games, guessing whether a given re-release is going to be gold or a total legacy-muddying disaster. Chalk another up in the latter column here, though. This re-release is less of a streaming triumph and more of a stream of hot piss in the face of fans who wanted Kingdom Hearts on the go. Nice one.