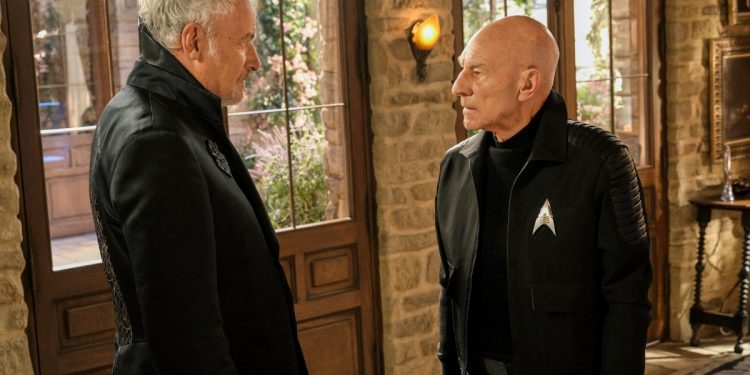 
The Return of Guinan

Picard has often been defined by how he keeps himself separated from those under his command. That leaves very few people in his life that he’s close to and is totally open with. One of those is Guinan, the former bartender and confidant to Picard, who he goes to for some much needed advice on relationships. Whoopi Goldberg’s return as the fan favorite character is full of warmth and she’s the only one who can stand up to Picard, easily calling him out on his crap.

Goldsman agrees that Guinan is the one person Jean-Luc can go to in this situation but she has a bigger purpose this season. As the trailers (and end of this episode!) have shown, time is being screwed with and Guinan has a unique relationship with time. Goldsman points to the classic “Yesterday’s Enterprise” where Guinan was the only one on the crew who knew time had been altered.

“That (aspect of her) was really helpful for this season’s storytelling,” Goldsman says. “She has a sort of trans-temporal awareness. She’s able to hold two contradictory timelines in her head.”

Arguably Picard’s second biggest star, Seven starts the season off in the understandable emotional state of being pissed off and worn down. Not only is she dealing with the galaxy’s unsavory types but she’s also still struggling with prejudice based on her past assimilation by the Borg. This has gotten to be so much that she intentionally only works with holograms.

Does this have anything to do with Seven’s longtime friendship with the holographic Doctor character from Voyager? After all, he more than anyone else could relate to Seven and helped her through her early years after being liberated from the Borg Collective. Actress Jeri Ryan hadn’t considered that but agrees it could have something to do with why Seven avoids flesh and blood crewmembers. She instead chalks it up to Seven always feeling like an outsider. A feeling that only got worse when Voyager returned to the Alpha Quadrant.

“It was not a great reception for her because people’s first reaction when they see her is they go right to the Borg implant on her face,” Ryan says. “She’s dealing with fear, anger, distrust, and disgust. She would rather be by herself. She feels safer like that because she doesn’t feel like she fits anywhere. She’s never felt like she’s got a place where she’s accepted and she’s still struggling to figure out who she is and reconcile her Borg half and human half.”

Back To Basics: How To Use CBD Oil

Back To Basics: How To Use CBD Oil