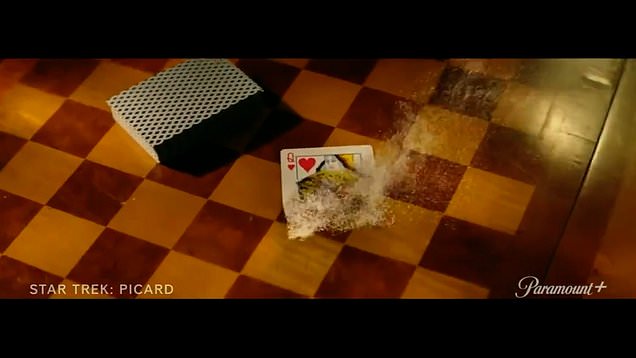 The baddy’s dramatic comeback was confirmed in the brand new trailer, which heard Patrick Stewart’s Jean-Luc Picard musing on the subject of time as a Queen of Hearts playing card disintegrated until just the ‘Q’ remained.

‘The trial never ends,’ de Lancie’s character then said, in an ominous tone.

The actor also shared the news of his casting on social media.

‘So excited to announce that I will be returning to visit my dear old friend Jean-Luc Picard in season 2 of Picard!’ he enthused.

‘I’ve aged a little bit to be more in keeping with where we are right now. I’m here to make your life as annoying as possible. He is deliciously naughty and terribly self-involved, so as my wife says, it’s not much of a stretch.’

Q became a recurring character within the Star Trek franchise, first appearing in The Next Generation pilot episode in 1987 where he served as the major antihero throughout.

The character is known for his pronounced comedic and dramatic chemistry with Picard.

Fans are buzzing to see Q back in action with one writing: ‘I literally screamed in incoherent joy when I realised what was happening with the playing card in the trailer.’

Echoing a similar sentiment, another penned: ‘Just saw that Q is returning to #StarTrek #Picard and I may need a minute to catch my breath. DeLancie and Stewart have the BEST chemistry and I’m so excited for season 2!’

The upcoming chapter of Star Trek: Picard is currently in production, however, fans will have to sit tight as it’s not due to be released on Paramount+ until 2022.

Got a showbiz story?

Quirky UK hotel stays - from floating hotels to old forts that you can stay in from £39.50pp a night

Quirky UK hotel stays - from floating hotels to old forts that you can stay in from £39.50pp a night

U.S. and Iran to hold indirect negotiations this week on 2015 Iran nuclear deal