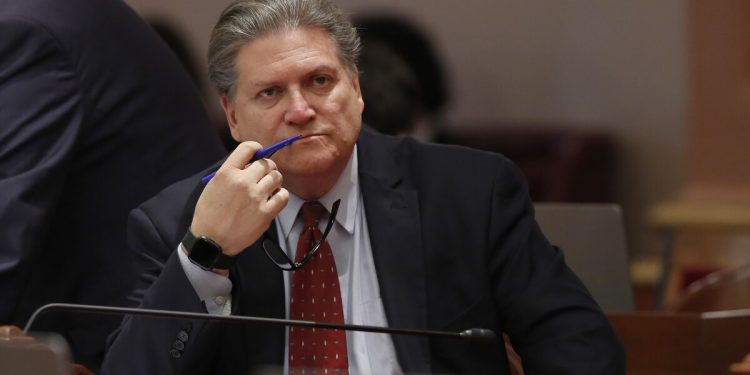 
Veteran Democratic legislator Bob Hertzberg plans to run for the Los Angeles County Board of Supervisors, upending the race to represent the San Fernando Valley on the powerful panel.

Hertzberg, who serves as the majority leader in the state Senate and was previously the speaker of the state Assembly, told The Times he was motivated to run by new district lines that place much of the Valley inside a single district.

“The San Fernando Valley in my judgment is too big to not have a voice on the Board of Supervisors,” Hertzberg said, noting that if it were a city, it would be the seventh largest in the nation. “I’m the only elected leader who would be in this race as of now who has an 818 area code. We in the Valley know what that means.”

Although the county board typically doesn’t receive the same attention as the Los Angeles City Council or the mayor’s office, it is among the most powerful local government bodies in the nation, with an annual budget of more than $39 billion. The five county supervisors represent 10 million people, more than all but 10 states.

Hertzberg said he is running because he believes he has a track record of providing results for the region’s residents, pointing to the funding he secured for the Orange Line, the performing arts center at Cal State Northridge and other projects.

He also said he’s shown he has a long-term vision and a collaborative nature that will help the county tackle some of the region’s most intractable problems, including homelessness and housing. He hopes to put a $25-billion bond measure on the November ballot that would provide down payment loans to people purchasing brand-new homes.

He said he would also focus on longer-term problems such as groundwater replenishment and extreme heat.

“A lot of people say the devil’s in the details. My view of the world is God is in the details,” he said. “People are hopping mad, and the bottom line is we have to deliver for folks.”

The contours of the 3rd District dramatically changed in a last-minute proposal during the redrawing of district lines after last year’s census. Under the new plan, the district lost many Los Angeles cultural landmarks but picked up conservative communities in the northern Valley, including Chatsworth and Porter Ranch. Those additions injected a new element into the district, which still contains liberal bastions such as Santa Monica and West Hollywood.

Kuehl was angered by the changes, saying in emails to constituents that they were politically motivated and meant to make the district more centrist and “a much easier district for a man who’s been salivating to run for the office but found himself in need of an electorate more closely tailored to his politics.”

Kuehl did not name the politician.

Hertzberg, an attorney and a moderate, is well-connected because of the relationships he has formed over decades in political life.

He started in 1974 as a driver for Mervyn Dymally, then a state senator running for lieutenant governor. He forged relationships with Latino leaders on the city’s Eastside, including Gloria Molina, Richard Alatorre and Antonio Villaraigosa. These relationships helped him win an Assembly seat in 1996. He served in that body for six years and later seven years in the state Senate. He also played behind-the-scenes roles when he was not in office, including serving as an advisor to then-Gov. Arnold Schwarzenegger, a Republican.

In announcing his run, Hertzberg told The Times he had collected the endorsement of more than 100 people, including politicians, community leaders and labor unions. Among his backers are former Gov. Gray Davis, state Treasurer Fiona Ma, Rep. Tony Cardenas and former Assembly Speakers Fabian Núñez and John Perez. County Supervisor Kathryn Barger, a Republican, has also endorsed him.

Still, he has not always been successful — he lost his 2005 bid for mayor.

And Hertzberg, whose nickname in Sacramento was “Huggy Bear” because of his propensity for giving embraces, was among the state lawmakers who got caught up in the #MeToo scandals that rocked the statehouse in recent years.

A 2018 investigation found that although he made some people uncomfortable with his hugs, his behavior wasn’t sexually motivated. He was reprimanded and told to stop initiating hugs.