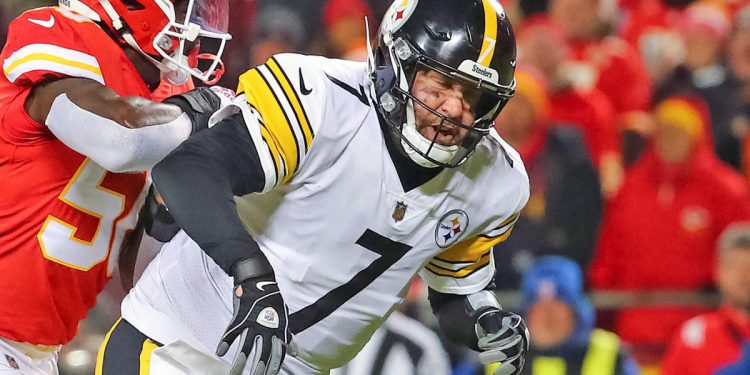 
Ben Roethlisberger did not formally retire following the Steelers’ 42-21 loss to the Chiefs in Sunday night’s AFC wild card round. But the 18-year veteran all but confirmed that he has played his final down as Pittsburgh’s quarterback.

A somber Roethlisberger spoke openly about his career shortly after completing his 272nd NFL game and 23rd playoff game. Roethlisberger threw for 215 yards and two touchdowns in what was likely the final game of his sure-fire Hall of Fame career.

“It’s tough, but I’m proud to play with these guys,” Roethlisberger said of the 2021 Steelers, who had to win their last two games just to make the playoffs as the seventh seed. “God has blessed me with the ability to throw a football and has blessed me to play in the greatest city, in Pittsburgh, with the greatest fans and the greatest football team and players. It has just truly been a blessing. I’m so thankful to him for giving me this opportunity.”

Roethlisberger said that he was meant to play for the Steelers after 10 other teams — most notably the AFC North rival Cleveland Browns — passed on him in the 2004 NFL Draft. He fought back emotion while mentioning late Steelers president/owner Dan Rooney, who made sure the Steelers didn’t pass on Roethlisberger when he was available in the ’04 draft.

“I’m just so thankful. I hope that I’ve been able to pass the legacy of what it is to be a Steeler. From Dan Rooney. We all miss him. Anyone that knew him misses him. Hopefully I can pass some of that on to some of the guys and the tradition of what it means to be a Steeler can be passed down. … We’ve got some guys in there that will continue to do that. Gave Cam [Heyward] a big hug and told him it’s on him now. It’s his job to pass it down and to keep teaching and holding guys to the Pittsburgh standard.”

Pittsburgh’s rocky finish to the 2020 season was one of the reasons why Roethlisberger decided to come back for one last season. Few could have seen Roethlisberger’s 2021 season ending on a much better note after the Steelers’ 1-3 start. The Steelers were able to right the ship with a four-game winning streak that included a comeback win in Cleveland in Week 8.

The last-remaining quarterback from the fabled 2004 draft class, Roethlisberger threw for 3,740 yards with 22 touchdowns and 10 interceptions (while completing 64.5% of his passes) in his final regular season. He enjoyed a successful partnership with receiver Diontae Johnson (1,161 yards and eight touchdowns) and rookie tight end Pat Freiermuth (seven touchdowns on 60 receptions). Roethlisberger was aided by rookie running back Najee Harris, who broke Le’Veon Bell’s and Franco Harris’ rookie franchise records.

Along with his game-saving tackle in Pittsburgh’s 2005 playoff win over the Colts, Roethlisberger’s most enduring NFL moment came in Super Bowl XLIII. Trailing late in the game, Roethlisberger led a game-winning drive that was punctuated by his touchdown pass to Santonio Holmes, as Pittsburgh became the first franchise to win six Super Bowls.

While the 2021 season did not end with another Super Bowl run, Roethlisberger expressed gratitude for what he and his teammates were able to accomplish this season.

“Just a bunch of guys that fought for each other, that fought their butts off and just competed,” he said of the ’21 Steelers. “Wasn’t always pretty, but there were a lot of games that we found a way. Just like tonight, fought to the end. I’m so proud of this group of men and the way they fight for each other, for the black and gold, for our fans. It’s just been an honor to play with them.”

The 21 pension tips and tricks no one tells you: An insider's guide