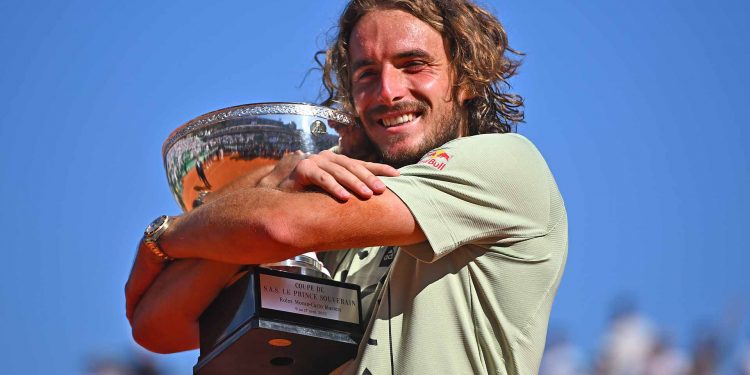 “I am very proud of myself,” Tsitsipas said in his on-court interview. “Things weren’t going well at one point, but I managed to stay composed to finish the match off. I am really proud with the belief I put in my game. Sometimes you doubt yourself, but it is always important to keep your head high.”

The Greek, who was appearing in his fourth final at this level, struck his forehands with fierce topspin and accuracy and recovered from failing to serve out the match at 5-4 in the second set to capture his first trophy of the season.

“He fought in moments I didn’t expect him to fight,” Tsitsipas said. “He can hit incredible winners out of nowhere and play unpredictably. But I was able to minimise that. I knew he would be a dangerous opponent but that is a great win for me. I think we will see great results from him in the future.”

In a standout week, the third seed produced consistent and aggressive tennis to capture his first title since he triumphed in Lyon last May. Tsitsipas overcame 2019 titlist Fabio Fognini, Laslo Djere and second seed Alexander Zverev in straight sets, but survived a major scare in the quarter-finals against Diego Schwartzman, rallying from 0-4 in the third set to advance.

The 23-year-old, who defeated Andrey Rublev in the championship match in Monte Carlo last season, will climb to No. 2 in the ATP Race To Turin on Monday. The Greek has now won eight tour-level trophies, with four coming on clay.

In a fast start, Davidovich Fokina showed little sign of nerves on Court Rainier III as he started the better, quickly finding his range on his forehand from the baseline to earn an early break. However, Tsitsipas quickly responded as he hit with greater depth, firing a forehand past the Spaniard to break back for 2-2.

The Greek continued to impose his heavy-hitting game on Davidovich Fokina, pulling the 22-year-old from corner to corner as he won four of the next five games to move ahead after 31 minutes.

Fuelled by momentum, Tsitsipas then seized further control at the start of the second set as he overpowered Davidovich Fokina with his ball-striking. The 23-year-old broke for a 2-0 lead, but Davidovich Fokina showcased the grit, which has seen him achieve breakthrough results the week. Pumped up and in the zone, the Spaniard began to club the ball with greater width, soaring back to 4-4.

Tsitsipas broke again when he received a little bit of luck on break point at 4-4 when his mis-hit forehand landed in, before he won the point with a topspin forehand that the Spaniard was unable to return. The Greek could not serve out the match though, with Davidovich Fokina raising his level to force a tie-break. Tsitsipas would not be denied a second Masters 1000 crown, though, playing more consistently in the tie-break as he forced errors from Davidovich Fokina with his width to triumph.

Tsitsipas improved to 3-0 in his ATP Head2Head series with Davidovich Fokina. He also eliminated the World No. 46 in Monte Carlo last year, when the Spaniard was forced to retire after losing the first set 5-7 in their quarter-final clash.

The 22-year-old was aiming to become the first unseeded winner at the Monte Carlo Country Club since Muster in 1992 and also the first player since qualifier Albert Portas in Hamburg in 2001 to capture his maiden tour-level title at a Masters 1000 event.

Despite defeat, Davidovich Fokina is projected to rise to a career-high No. 27 in the ATP Rankings following his dream run in the Principality. He arrived in Monte Carlo holding just a 4-9 record on the season and having lost all three of his previous tour-level semi-finals.