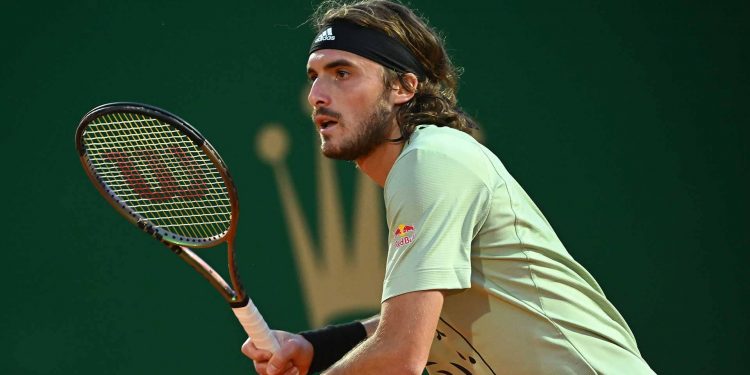 The Greek continued his dominant form at the Rolex Monte-Carlo Masters with a 6-3, 6-0 win. After claiming the 2021 title without dropping a set, he extended his streak to 11 consecutive sets with the victory.

Adapting to the unusually cold and windy conditions at the Monte Carlo Country Club, Tsitsipas made a fast start in his first clay-court match of the season.

“Great things out there. I was able to really perform close to my best and deliver the result that I did,” Tsitsipas assessed, noting the conditions limited the typical clay-court bounce of the ball. “Nevertheless, I was still able to generate some good pace and create some good angles which gave me a lot of points.”

Tsitsipas won the opening three games of each set, and while Fognini was able to come back to level the first, he had no answers beyond that as the third seed pressed home his advantage. From 3-3 in the opening set, Tsitsipas reeled off the last nine games in a row to ease into the last 16. The turning point of set two came in the second game as Tsitsipas erased a pair of break points across four deuces to consolidate an opening break.

As the Italian’s resistance waned, Tsitsipas raced through the second set in 30 minutes. He saved six of seven break points across both sets and was aided by 34 unforced errors from Fognini.

Tsitsipas’ dominance was reflected in the Balance of Power breakdown, showing that the Greek was in an attacking position 24% of the time compared to Fognini’s 14%. (Learn more about Balance of Power.)

The 23-year-old can now enjoy a day off as he awaits the winner of Wednesday’s second-round matchup between 16th seed Lorenzo Sonego and Serbia’s Laslo Djere.

While Tsitsipas is the defending champion, Fognini was defending 500 ATP Ranking points in Monte Carlo — half of the 1,000 points he earned for winning the 2019 title.