Stephanie Beecham on dating Marlon Brando, Dynasty and why she ‘can’t bothered’ to wed 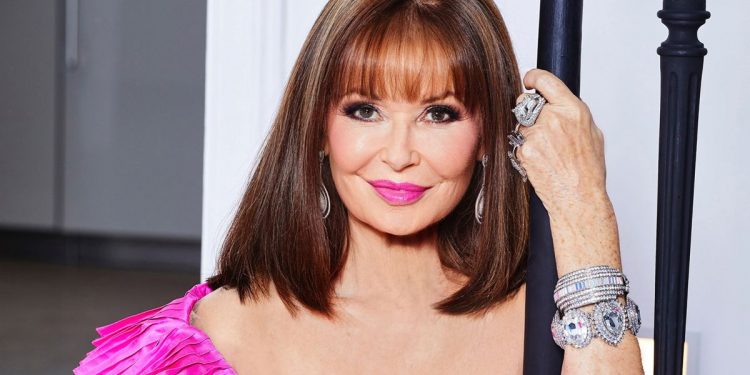 As we team up with the star for a Hollywood-style shoot, Stephanie looks every inch the screen siren – and she tellsus she had a blast.

“You can’t go through so many years on American soap operas without knowing about clothes,” she says. “This shoot is just oozing glamour and fun. I might be 75 soon, but that’s just a number – I’m still a kid!”

Stephanie has been in this business for nearly 60 years and we could spend hours listening to her reminisce about Tinseltown.

From going on a date with Marlon Brando to being taught about lighting by Ava Gardner and saved from social embarrassment by Sir Anthony Hopkins, Stephanie is the epitome of old-school Hollywood fame.

Still, the star, who now lives in London, admits that she’s never enjoyed A-list parties and is much more at home around children. She prefers to spend time with her two daughters from her previous marriage, Phoebe, 47, and Chloe, 44, fiancé Bernie Greenwood, 81, and 21-year-old grandson, Jude.

Here, Stephanie talks us through her amazing career and why we will never catch her wearing sweatpants…

Hi, Stephanie. You’ve been in the business for nearly six decades and worked with so many people. Do you have any highlights?

So many. I remember the first day on Dynasty. I just thought to myself, “Good God, that’s Barbara Stanwyck and this is Hollywood.” It was the same with Charlton Heston, who became one of my dearest friends. I had a date with Marlon Brando before we started filming [1971 movie The Nightcomers]because I insisted. If he wanted to fire me or anything before we got on set, I wanted to make sure I’d had a date with him beforehand! We were talking absolutely deeply, and I forgot his name. I said, “What’s your name?” He looked at me and laughed. We were so deep in conversation. There was just this amazing presence, but I literally forgot it was Marlon Brando.

He became a very special, tender friend. What a difficult life he had. He was completely and utterly wonderful to work with. I thought it was like being overtaken on the motorway – I’m a Mini and he is a Rolls-Royce. I’d sometimes work with people and I’d think, “Oh no, maybe not” – I obviously can’t name them, but he was definitely a special person. I adored him. We maintained a friendship until the very end.

You must have been to some amazing showbiz parties…?

She can sometimes ditch the stereotypical black

No! That’s an oxymoron. My hearing is not good enough to enjoy a party [Stephanie was born with no hearing in one ear and 80% hearing in the other]. And now, masked, I can’t lip-read through a mask. So it’s not my idea of a good time.

There must have been some amazing moments, though?

One of the most extraordinary things for me was when I was at a party for the Coen brothers [film-makers Joel and Ethan]and Holly Hunter got up and said something, Sigourney Weaver got up and said something and then they announced who had won the raffle, and it was me. I thought,“How lovely!” I went to walk up and felt overwhelmingly embarrassed as
I hadn’t got up to say something nice about the Coens, I was just collecting a raffle prize. I was overcome with embarrassment. I grabbed my prize, said thank you and ran off the stage. As I was just going to descend these terribly difficult stairs my
friend Anthony Hopkins got up and leapt up the stairs, saying, “Stephanie, how wonderful to see you.” I whispered, “Tony, I’m so embarrassed,” and he said, “Yes, I know, that’s why I’ve come to get you!” He led me back to my table.

How sweet! One of your most iconic roles was in Dynasty. Did you keep any memorabilia?

Not really. I couldn’t wait to give the clothes back. They were much too elegant for walking barefoot on the beach. I shall be going to Joan Collins’ 20th wedding anniversary soon – can you believe that?

Amazing! Are you and Joan still close?

We haven’t had dinner together for a couple of years, but then no one has with Covid.

Which lessons did you learn from your early days that you still use now?

I learnt about lighting from Ava Gardner. She taught me the basics. In general, I’ve learnt from my own sex more than men. I’ve acted with my male co-stars, but as far as learning and observation goes, it’s been women.

Have you found as you get older there are just as many parts?

Yes. I am realising that if I allow a proper, genuine ageing there are plenty of roles.

Would you describe your life as glamorous?

It’s never been glamorous. It’s just been whether I was acting in uncomfortable shoes that made me look tall and beautiful or whether I was barefoot on the beach. My life has been extraordinary, varied, amazing and so full. Other people might call it glamorous, I just call it life.

Is the Stephanie at home very different to the high glamour we see in public?

I’m wearing a pretty stunning jumper at the moment. I’m dressed in customary black, but I’ve got those fabulous chunky boots on – aren’t they good? I don’t think people want their feet to be uncomfortable any more. But I’ve never worn sweatpants – I think
they’re disgusting.

Let’s talk about your personal life. You and Bernie got engaged in 2014. Do you have plans for a wedding?

I can’t be bothered to put on a pair of high heels to get married! Bernie often says, “Why haven’t we got married? Why did you say we could get engaged?” And I say, “Because I love you to bits, I don’t know about getting married. It was romantic to be asked.” But we still might – these two very old people with walking sticks might suddenly decide to walk down the aisle. We’ve been together for 14 years, that’s a lovely, long marriage, isn’t it?

Definitely. You also have a grandson Jude. Do you love being a grandmother?

Yes, I want more grandchildren but it doesn’t look likely. I love playing a game of cards with him and just talking. I love being laughed
at by him. Children are so brilliant at being themselves. I feel most relaxed around children, animals or people in need.

Is there anything you’d still love to do, like writing fiction?

I’ve certainly lived a life full of drama enough to inspire what I believe readers may enjoy, so I’m seriously contemplating it, and if I do, maybe I’ll get my first bestseller at 75, I believe anything is possible!

Afghans protest US move to unfreeze $3.5B for 9/11 victims