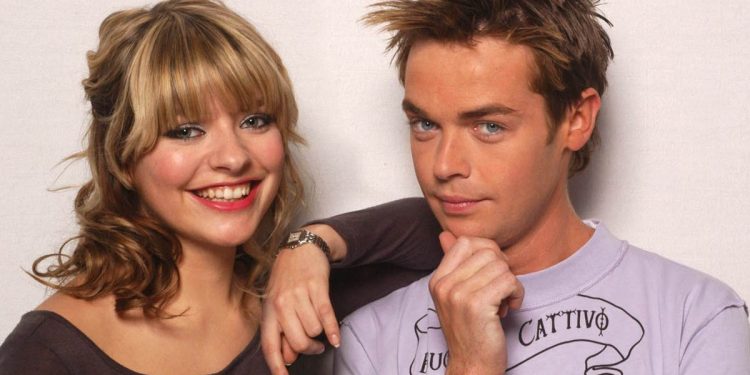 
Fans have been left shocked after a throwback clip emerged of Stephen Mulhern kissing Holly Willoughby on the lips as they hosted a children’s TV together.

Holly Willoughby and Stephen Mulhern are set to reunite on Dancing On Ice as Stephen steps in for Phillip Schofield.

The This Morning host has tested positive for Covid and is now in isolation, meaning that the former Saturday Showdown co-hosts will be reunited.

The pair hosted the show, previously called Ministry of Mayhem, between 2004 and 2006.

But an unearthed clip of the pair uploaded to TikTok revealed that there was perhaps more to the pair’s relationship than meets the eye.

He explains: “Here’s the deal, if you open it you must wear it for the whole show.”

Agreeing to the terms, Holly rips open the present to find a green Christmas hat with mistletoe attached to it.

A gleeful Holly announced: “Hurray for me! I can kiss all of the boys in the world all of the time.”

She then sings: “Tis the season to kiss Holly fa la la la la” to the tune of Deck the Halls, but when her fellow presenter kisses her on the lips she objected: “No! Stephen, you don’t count!”

He argues: “What do you mean I don’t count? Whoever you are under the mistletoe with you must kiss,” kissing her again before declaring: “Happy Christmas!”

Joking in response: “Don’t wear my lips out, I am going to be kissing Anthony from Blue soon.”

But Stephen kisses her again, and then two more times later in the show – making a total of five smooches over the course of the Christmas special.

Fed up with her co-star’s antics, Holly finally pulls off the hat, telling Stephen: “Right, that does it!

“I am taking this off – and you are definitely on the naughty list.”

Fans were stunned by the video, with one commenting: “Wow, how young do they look here?!”

Holly and Phil usually host Dancing on Ice together
(

Stephen will take Phillip’s place as he recovers from Covid

Another added: “God, he would never be allowed to do that now!”, reflecting how TV regulations have drastically changed.

A third noted: “This was a different day and age.”

One more chimed in: “Hahaha holy s**t, this wouldn’t be allowed now for so many reasons.”

Although the show came off the air over 14 years ago, the pair remain good friends and have each gone on to have illustrious careers.

Holly and Phil have worked together since 2009
(

Holly is one of Britain’s highest-paid women in TV, having presented This Morning with Phillip Schofield since 2009.

Meanwhile, Stephen presents various game shows and spin-off programmes at ITV, and will now join his former co-star to host an episode of this year’s gripping season of Dancing On Ice.

Boy, 11, has a metal hook removed from his penis AND scrotum after freak accident

Boy, 11, has a metal hook removed from his penis AND scrotum after freak accident