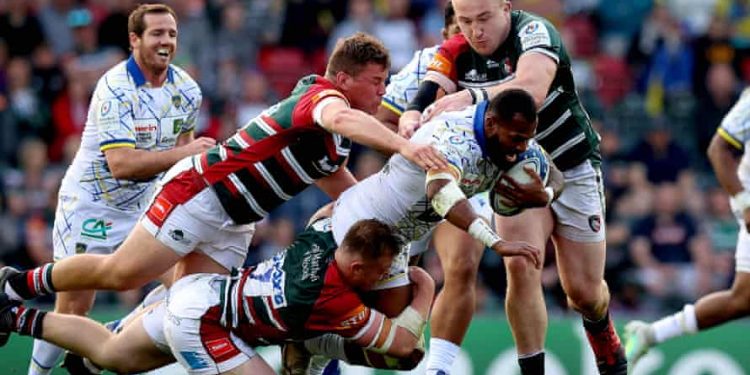 
From the opening whistle to the last, Leicester’s home supporters lapped up the spectacle. Sure it was scrappy, sure both teams coughed up several opportunities, and sure, this wasn’t exactly rugby at its most organised. But it was entertaining. And judging by the volume of the crowd, and the number of ‘ooohs’ and ‘aaahs’ they emitted, they were enjoying themselves under blue east Midlands skies.

On that they differed with Leicester’s coach Steve Borthwick who, as Ellis Genge revealed, gave his team a “bollocking”. This was the antithesis of Borthwick-ball which is characterised by a ruthlessness in the red zone, discipline at set-piece and an efficiency at the breakdown. To give them their dues, they were commanding in defence as white waves routinely crashed on green and red rocks.

“At half-time there were things we needed to do better,” Borthwick said, understandably emphasising the result rather than the display. “At the start of the season, who’d have thought that Leicester Tigers would be European Champions Cup quarter-finalists? You’d think there’d be no chance of that.”

George Ford was bullish in his appraisal of Leicester’s style earlier this week, perhaps reflecting a sentiment in the camp that they’re not getting the love they feel they deserve. If any critics are among the Leicester faithful, they would surely hope their team revert back to type for the home quarter final against Leinster next month.

They started this one on the back foot, spending the opening six minutes defending in their own 22. When they got the ball, a slick move left then right saw them maraud into Clermont territory and win a penalty. Ford punted it into touch and that well-drilled line-out brought it down. Several dominant phases later Hanro Liebenberg crashed through a tackle and stretched to score.

Clermont attacked with desperation with the 18-year-old scrum-half Baptiste Jauneau a constant presence. But Leicester’s defence was immense, belying their scoreboard comfort, prompting Camille Lopez to take three points when given the option.

The remaining 25 minutes of the first half was filled with intent but lacked precision when it mattered. Jauneau stepped out while bringing the ball down in the try area. Chris Ashton knocked on while sliding to collect Jack van Poortvliet’s kick. Yohan Beheregaray fumbled Jauneau’s low pass with nothing but space in front of him. So the score remained 7-3 in Leicester’s favour.

Borthwick is not one to divulge the content of his locker-room rants, but his intentions were made clear when he replaced youngsters Nic Dolly and van Poortvliet with Charlie Clare and Ben Youngs. A scrum penalty soon after was slotted by Ford.

Though correlation doesn’t equal causation, those substitutions saw Leicester rediscover their accuracy. Ford ignited a move down the left that was finished by a hot-stepping Matt Scott.

Clermont were enthusiastic but uninspired with ball in hand but they did cross the line in the corner through Alivereti Raka. That merely tugged the tiger’s tail. The Premiership leaders romped up field and forced a yellow card for Etienne Fourcade near the line. Tommy Reffell lost the ball attempting to ground but his slip was immaterial as Daniel Bibi Biziwu’s infringement led to a penalty try as well as another yellow card.

It was 14 against 13 when Ollie Chessum was shown red for a high tackle on Samuel Ezeala. Leicester exploited the extra space by scoring a stunner from distance. Youngs broke off a scrum in his own 22, dummied, passed to the dancing Harry Potter who in turn set up Freddie Steward.

Fritz Lee ran a wonderful line to notch an impressive score of his own, but the game, and the tie, which ended with a 56-27 aggregate score, had long since been settled.