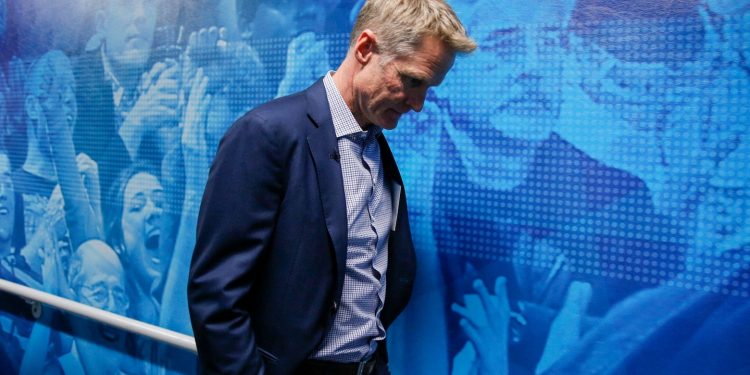 “When are we going to do something?” Kerr said during a news conference before Game 4 of the Western Conference finals. “I’m tired. I’m so tired of getting up here and offering condolences to the devastated families that are out there. I’m tired of the moments of silence. Enough. There’s 50 senators, right now, who refuse to vote on H.R. 8, which is a background check rule that the House passed [last year]. … There’s a reason they won’t vote on it: to hold on to power.

“I ask you, Mitch McConnell, and ask all of you senators who refuse to do anything about the violence, the school shootings, the supermarket shootings, I ask you, ‘Are you going to put your own desire for power ahead of the lives of our children, our elderly and our churchgoers?’ Because that’s what it looks like.”

Kerr, 56, is a longtime advocate for gun control. The issue is personal: His father, Malcolm, was shot to death in Beirut in 1984.

State officials said at least 18 Robb Elementary School students and a teacher allegedly were killed by an 18-year-old gunman. The shooting took place roughly 350 miles southwest of Dallas, where the Warriors will face the Mavericks on Tuesday night, and followed other recent mass shootings in Buffalo and Laguna Woods, Calif.

The House of Representatives passed the Bipartisan Background Checks Act of 2019, which seeks to expand federal background checks for gun purchases. The legislation was conceived following a 2012 school shooting in Newtown, Conn. H.R. 8 would establish similar background checks.

“In the last 10 days, we’ve had elderly Black people killed in a supermarket in Buffalo. We’ve had Asian churchgoers killed in Southern California. Now we have children murdered at school,” Kerr said, slamming the table at one point for emphasis. “Do you realize 90 percent of Americans, regardless of political party, want universal background checks? We’re being held hostage by 50 senators in Washington who refuse to even put it to a vote, despite what we, the American people, want. They won’t vote on it, because they want to hold on to their own power. It’s pathetic.”

Warriors star Stephen Curry shared a clip of Kerr’s comments Tuesday and added, “Watch this as much as you watch the game tonight.”

Mavericks Coach Jason Kidd read a brief statement about the shooting during his pregame news conference.

“Our hearts go out to the victims and family of the horrific events in Uvalde,” Kidd said. “We send our condolences to our fellow Texans, and we’ll keep them in our hearts. We truly will play with heavy hearts tonight for the community, for the school of Robb Elementary School.”

The Warriors hold a 3-0 series lead over the Mavericks and can advance to their sixth NBA Finals in eight years with a Game 4 win.

The NBA family is devastated by the horrific shooting that took place today in Uvalde, Texas. Our thoughts and heartfelt condolences go out to the victims’ family and friends, and the entire Robb Elementary School and Uvalde community.

The NBA issued a statement saying it was “devastated by the horrific shooting” but did not move to postpone the game. Kidd and Kerr expressed a level of discomfort with playing mere hours after the mass shooting.

“I want every person here, every person listening to this, to think about your own child or grandchild, mother or father, sister or brother,” Kerr said. “How would you feel if this happened to you today? We can’t get numb to this.”

In the WNBA, the Washington Mystics opted for a media blackout following their 70-50 win over the Atlanta Dream on Tuesday night. Guard Natasha Cloud represented the team in comments to reporters after the game.

The Mystics decided to have a media blackout tonight and focus on the Texas shooting. Natasha Cloud represented the team with a few words. #wnba pic.twitter.com/NMxVLV74B1

“This is us using our platform. The game doesn’t matter,” she said. “The 18 lives that were lost today to senseless gun violence in Texas at an elementary school, we’re talking about our kids not being safe to go to school and our government still isn’t implementing sensible gun laws.”

This Is Us Finale Recap: Season 6, Episode 18 — Rebeccas Funeral - TVLine