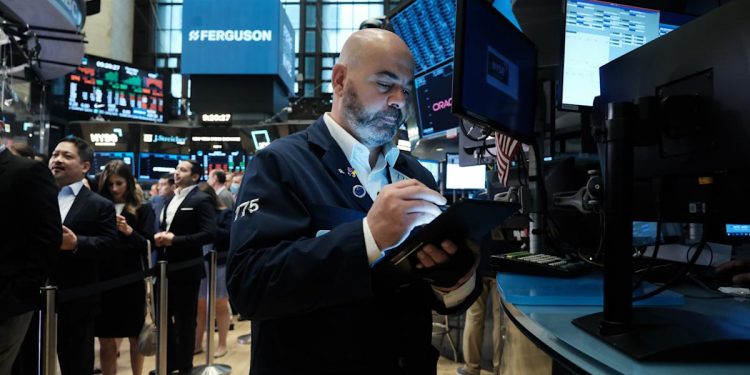 U.S. stock futures gained Friday morning, though the major indexes are still headed for losses for the week after concerns over persistent inflation and the resilience of the U.S. economy stirred up further volatility in recent sessions.

Contracts on the S&P 500 and Nasdaq rose more than 1%, and Dow futures added more than 200 points during the pre-market sessions. The sharp move higher came after Federal Reserve Chair Jerome Powell reaffirmed in an interview with Marketplace public radio on Thursday that two more 50 basis point rate hikes were on the table for the next two Fed meetings, and that officials were not “actively considering” a more aggressive 75 basis point hike. His comments echoed what other Fed officials also said this week.

Just a day earlier, the S&P 500 had closed within striking distance of a bear market, typically defined as a close of at least 20% from a recent record high. The index has declined by just over 18% from its Jan. 3 record high through Thursday’s close, and it paced toward a weekly drop of 4.7% if levels hold through the end of Friday’s session.

The Dow Jones Industrial Average and Nasdaq Composite each also headed for weekly losses of 3.6% and 6.4%, respectively, based on Thursday’s closing prices. Treasury yields have spiked and then pared gains back this week, with the benchmark 10-year Treasury yield hovering around 2.9% Friday morning. Bitcoin prices recovered to trade above $30,000 after setting the lowest level since Dec. 2020, as a cratering in prices of Luna further reverberated across the broader cryptocurrency market.

“Inflation has certainly become not only topical, but a real issue for the broader market, as the Fed has also increased its outlook for the number of [interest rate] hikes needed,” Sonali Pier, managing director and portfolio manager at Pimco, told Yahoo Finance Live on Thursday. “In terms of the effect of inflation, it’s really at this point, we’re going to see if the Fed raising rates, unwinding some of the balance sheet, can take off some of that inflation froth. Because it’s quite high, and it’s starting to impact companies — from their ability to push through from a pricing power perspective, as well as consumers, whether that’s at the gas pump or as a result of food increases and the like.”

Other strategists agreed that the Fed’s response to inflation — and how well the economy holds up as the Fed tightens financial conditions to address inflation — will be the key factor to watch going forward for the markets.

“We’re in an environment right now where inflation is high. The labor market is very tight. The Fed wants to bring inflation down. They want to sort of cool the overheating in the labor market, which means their bias is to tighten financial conditions and try and slow growth,” Jason Draho, UBS Head of Asset Allocation, said on Thursday. “In that environment, it’s not great for any sort of financial assets.”

“[Once] we get some sort of real break on inflation that people become much more comfortable that it’s moderating, and moderating [to] a sustainable level that the Fed could be more comfortable, and they don’t have to hike more aggressively … I think that’s the key catalyst,” Draho said. “Unfortunately, that might take a few more months before the data starts to clearly show inflation is definitely below its peak, and the Fed could achieve its target two years out.”

“So I think for the time being, it’s definitely a choppy market,” he added.

Shares of Tesla (TSLA) jumped by more than 6% ahead of the opening bell Friday morning after CEO Elon Musk said his $44 billion plan to purchase Twitter (TWTR) was temporarily paused, pending more details over how much of Twitter’s use base comprises bot accounts.

“Twitter deal temporarily on hold pending details supporting calculation that spam/fake accounts do indeed represent less than 5% of users,” Musk said in a Twitter post early Friday. He linked to a Reuters story suggesting Twitter filings showed fake or spam accounts made up fewer than 5% of the company’s monetizable daily active users.

In announcing his deal to buy Twitter over the past month, Musk has suggested targeting bot accounts and authenticating users was one of his priorities for the company post-deal.

Twitter shares sank 11% in early trading to hover around $40 apiece.

Here’s where markets were trading ahead of the opening bell Friday morning: