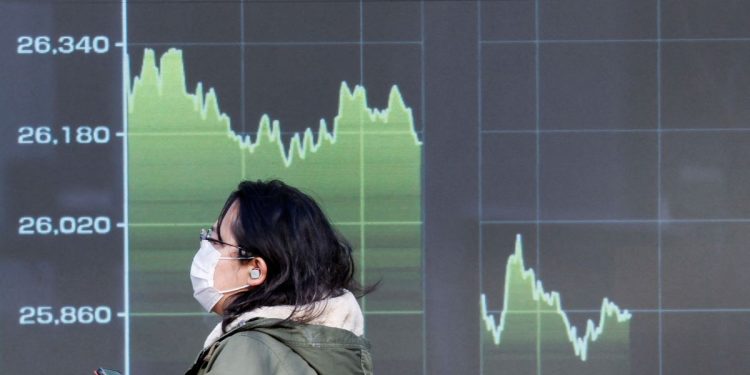 LONDON, May 18 (Reuters) – A rebound in stocks ran out of steam on Wednesday as concerns about the economic growth outlook and rising inflation knocked sentiment, while a UK inflation reading of 9% underlined just how much higher interest rates might be headed.

European shares were mostly lower and futures on Wall Street pointed to a weaker open , .

Many analysts have characterised this week’s sharp rally as a short-term bounce of the sort common during a lengthier downward trend for equities. Few are willing to predict the end to selling after a bruising first five months of the year for risky assets given so much macroeconomic uncertainty.

“Investor sentiment and confidence remain shaky, and as a result, we are likely to see volatile and choppy markets until we get further clarity on the 3Rs — rates, recession, and risk,” said Mark Haefele, chief investment officer at UBS Global Wealth Management.

In currency markets, sterling was the big loser, shedding as much as 1% to $1.2373 after UK consumer price inflation hit 9% in April, a 40-year high and roughly in line with analysts’ expectations. The pound had risen sharply this week and some of Wednesday’s fall was down to profit taking.

British inflation is now the highest among major economies but prices are rising rapidly across the world, forcing central banks to hike rates even in the face of slowing economic growth momentum.

Canada’s April inflation reading is also due later on Wednesday.

Shanghai is edging towards an end to its protracted lockdown and China’s vice-premier made soothing comments to tech executives in the latest sign of a let up in pressure. read more

However, good news was offset by the reminder from Federal Reserve Chair Jerome Powell that controlling inflation would demand rate rises and possibly some pain. read more

Investors have priced in 50 basis point U.S. rate hikes in June and July and see the benchmark Fed funds rate nudging 3% by early next year.

U.S. Treasury yields were steady on Wednesday below recent multi-year highs, but the German 2-year government bond yield shot to its highest since December 2011 after more hawkish central banker comments. The European Central Bank’s Klaas Knot said on Tuesday that a 50 basis point rate hike in July was possible if inflation broadens.

Commodities have rallied with stocks this week, although most prices are below recent highs.

“Two developments have altered the macro picture,” said chief economist Paul F. Gruenwald, pointing to Russia’s invasion of Ukraine and inflation, which has turned out to be higher, broader and more persistent than first thought.