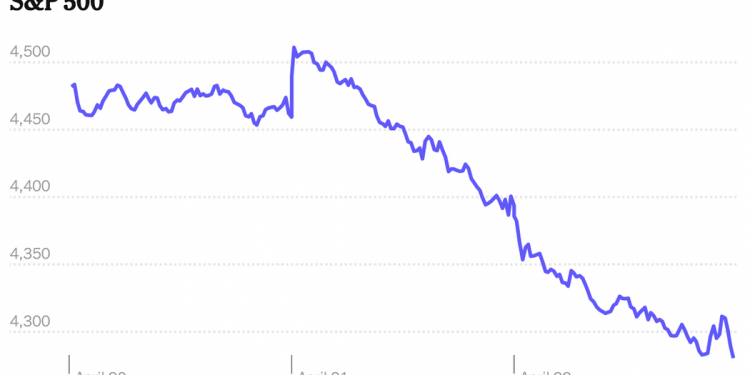 The prospect of a fast increase in interest rates has hit technology stocks particularly hard. Facebook, Microsoft, Amazon and Alphabet, Google’s parent company, are down more than 10 percent for the month, while the technology-heavy Nasdaq composite, which fell 2.5 percent on Friday, is down more than 9 percent. The index is down 18 percent for the year.

Investors have also had to contend with supply chain constraints, which are hampering sales and leading to higher prices. In February, Russia’s invasion in Ukraine meant the already fragile global supply chain faced a new challenge as Western countries imposed sanctions on Russia, including a ban on oil imports from the country, a move that caused a surge in energy prices.

Oil prices retreated on Friday, with futures contracts for June delivery of Brent crude, the international standard, falling 1.7 percent, to $106.65 a barrel. Still, the price represents a sharp increase since the beginning of the year, when prices stood at $78.98 a barrel. Oil and commodity prices are expected to remain volatile as the Russian war in Ukraine continues.

And, in China, the world’s second-largest economy, Shanghai and more than a dozen other cities were locked down in late March to battle the surge in case of the Omicron variant of the coronavirus. Factories and other workplaces had to shut down as well.

And on Friday, a string of disappointing earnings forecasts added to the downdraft.

“The challenging labor market pressured margins as the cost of labor increased more than we expected as compared to the first quarter of the prior year,” said Samuel Hazen, chief executive of HCA Healthcare, during a call with investors. “In some situations, the challenges in the labor market also constrained our capacity, preventing us from delivering hospital services to certain patients.”

Transnistria: What is the breakaway region of Moldova that Russia may be interested in? – The Washington Post

Transnistria: What is the breakaway region of Moldova that Russia may be interested in? - The Washington Post