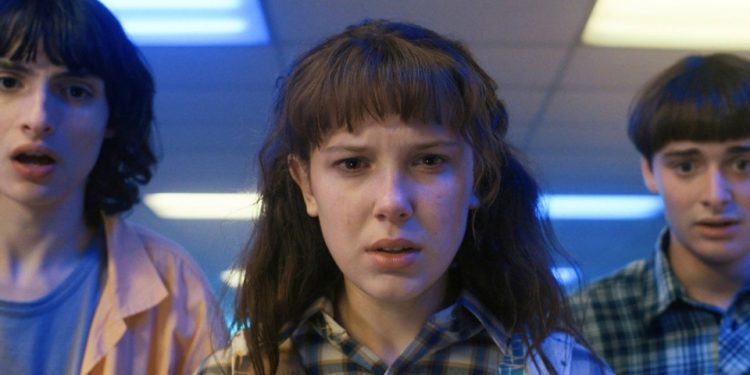 
The kids are all grown up (and going to war) in the official trailer for Stranger Things Season 4.

We wouldn’t blame you for not remembering much of the third season.

The last time we saw the citizens of Hawkins, Indiana, face off against the supernatural was in 2019, before COVID-19 turned our world upside down.

The first season of Stranger Things was a smash hit for Netflix in 2016, and was quickly followed by the second season in 2017.

Season 3, however, took a little longer.

And Season 4 has been the longest wait yet.

To be fair, we are still battling a pandemic. The virus has affected most, if not all, industries.

When COVID-19 first wreaked havoc on the world, Netflix shut down all film and scripted TV productions in the US and Canada, including Stranger Things.

Executive producer and director Shawn Levy explained in an interview with Collider last year that the combination of COVID-19, its effects on production and their plans for Season 4 contributed to the delay.

“As much as it pains our viewers that it will have been so long, trust me, it pains Matt, Ross [the Duffer Brothers, show creators] and I more,” Levy said.

“It is a kind of perfect storm combination of COVID shutdown, slower pace of filming in COVID protocols and health protocols, which are necessary, and coincidentally we chose Season 4 to be by far – and I mean, by far, far, far – the most ambitious of the seasons.”

So, what can we expect from “the most ambitious” of seasons?

The kids are (not) alright

The close-knit group of friends have been split up for their own safety as a new supernatural threat reveals itself, forcing the poor teenagers to once again take on the horrors of the Upside Down.

“A war is coming. Your friends in Hawkins are very much in the eye of a storm,” Eleven is warned.

“I don’t know how to say this other than just to say it – without you, we can’t win this war.”

Hopper (David Harbour) is revealed to be alive, although he’s not exactly well. The police chief is imprisoned in Russia and forced to fight Demogorgons, the monstrous creatures that have appeared prominently in past seasons of Stranger Things.

Then, in the final seconds of the trailer, we get a peek at what we presume is the big, bad villain of the season.

It’s a human crossed with a Demogorgon, who can speak. Lovely!

Although it has been three long years between seasons, the fourth takes place six months after the events of Season 3.

In the years since Season 3 came out, the breakout stars of Stranger Things have made a name for themselves in the industry. But they haven’t strayed too far from their roots.

Brown has appeared in a slew of films, including Netflix’s Enola Holmesand released a Gen-Z skincare line.

As well as acting, co-star Wolfhard has been busy making music with his band The Aubreys, while Matarazzo scored a hosting gig on the Netflix prank show Prank Encounters.

Sink starred in the Netflix trilogy Fear Street, as well as the music video for Taylor Swift’s 10-minute version of All Too Well.

And McLaughlin and Schnapp have featured in Netflix films, too.

How are the fans feeling?

You would think so much waiting would affect the level of excitement surrounding the fourth season.

But the moment Netflix released the trailer on Wednesday, #StrangerThings4 started trending on Twitter.

Fans have since pulled apart the trailer, searching for clues and Easter eggs before the season’s May release date.

Blink and you’ll miss some of these clues, like the one below. It’s a marvel how anyone can spot them.

Season 4 has been split into two parts, Volume 1 and Volume 2, which the Duffer Brothers explained was due to its run time, that is near twice the length of any previous season.

Matt Duffer recently told Deadline: “I don’t think we have an episode clocking in under an hour.”

Season 4, Volume 1, will be released on May 27, while Volume 2 will release five weeks later on July 1.

Then, fans will have to play the waiting game once more before the fifth and final season of Stranger Things.

‘It seems a bit like Lucy pulling the football away.’ Student loan borrowers got another break on payments — what comes next?