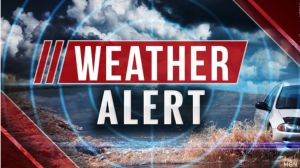 VictoriaTexas-:  Today: Cloudy and then gradually becoming mostly sunny skies with breezy winds while temperatures stay above average.  High: 87 degrees. Winds: S 15-25/G35 mph becoming NW.  A 30% chance of scattered showers and thunderstorms mainly before 8 am.  A Wind Advisory is in place until 7 am on Wednesday.  Winds could gust to 45 mph thus blowing unsecured objects.  Tree limbs could blow down along with power outages occurring.  A Red Flag Warning is in effect from 10 am until 8 pm on Wednesday with 40 mph wind gusts, humidity levels between 10-30 percent, allowing for fires to spread rapidly while a Burn Ban is in place making outside burning prohibited.

Tuesday: Mostly cloudy skies with breezy winds while temperatures stay above average.  High: 86/60 degrees. Winds: SW 15.  A 40% chance of scattered showers and thunderstorms in the AM.

Hisnopsis: The big story continues and that is the warm, dry, windy conditions leading to elevated fire weather through Wednesday.  Storms move into Texas on Tuesday as high pressure exits the region from west to east.

The approaching front from the northwest, will get some tug from the exiting high to the east, combined with low-level winds from the south along with fast-moving upper-level winds lead to 40 mph plus wind gusts on Tuesday that will carry into Wednesday. Wind Advisories and Elevated Fire Weather continues through Wednesday. Dry vegetation, low humidity levels and the strong winds are the reasons for the bulletins.

Winds became even stronger last night (Tuesday night into Wednesday morning) due to fast moving upper-level winds (50 knots) along with the continued approach of the cold front (from the northwest).  The strong winds will keep fire concerns alive, while power lines could come down with the strong winds.  Cooler air with the front will move to areas west of the viewing area by 4 am (4 am to 6 am). Then, heading into the viewing area, reaching the coast by 9 am on Wednesday.

Temperatures will hardly be affected, but dewpoints will drop back down as the dry air moves in behind the front from out of the northwest.  The sinking air out of the northwest will shoot temperatures up into the upper 80’s to even the low to mid 90’s further west.  Again, the primary concern will be relative humidity levels from 10-20 percent along with the strong winds keeping critical fire concerns at the forefront.  Winds should weaken by Wednesday evening.  Rip currents were strong on Tuesday and could be a concern on Wednesday as well.

Relative humidity levels will be lower, and so will the winds compared to earlier in the week.  Dry vegetation and even the above criteria, will keep Fire Weather Concerns through the weekend.

High pressure will start to shift off towards the northeast Thursday night into Friday.  This movement will allow for Gulf moisture (out of the south/southeast) to start moving into the region.

By Tuesday or Wednesday, storms along with a cold front will move through South Texas.  The boundary pushing through the Gulf moisture could be enough to bring some isolated to scattered showers Monday through Tuesday of next week.  Temperatures look to be warming up again next week as temperatures could reach triple digits out west on Tuesday.