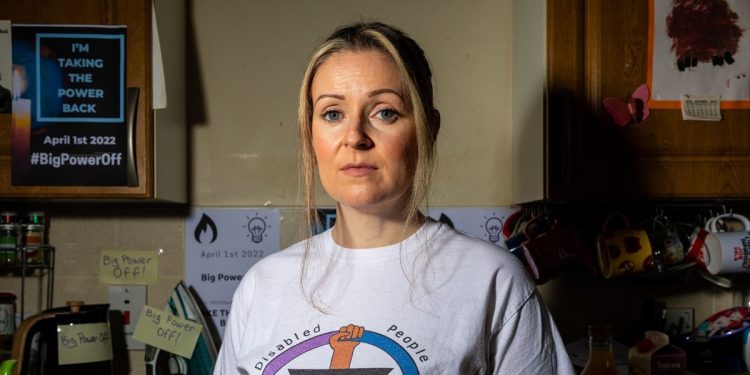 
A mum has revealed she’s turned to using wartime cooking methods to save money amid the cost of living crisis and this month’s energy spike.

Jennifer Jones, a campaigner who is disabled, claimed she’s already been feeling the affects of rising costs on her wallet.

The mum-of-two from Sheffield, South Yorkshire, is the mind behind the Big Power Switch Off which saw households urged to turn off all power for 10 minutes on Sunday night.

Now, she wants Brits to do the same again on Saturday April 16 at 7pm.

Jennifer spoke to YorkshireLive and said that she – and millions like her – were struggling to get by as prices for energy, food and more skyrocket.

The mum has already added plenty of layers of clothing while living in the house, but struggles with the cost nonetheless.

She’s even begun using a haybox to cook dinner for her and her children – it’s a method that was popular during the blitz when fuel was limited and works a bit like a slow cooker, but without the use of any electricity.

Jennifer makes soups and stews in the haybox which helps her limit how much time she spends with her cooker on.

Haybox cooking requires the food to be heated to boiling point in a covered pot, then put inside a box which is lined with hay and covered with hay.

The hay insulation means heat stays around the pot allowing it to cook over the course of the day like a slow cooker would.

Jennifer said: “I don’t feel like I’m in one of the richest countries in the world, I don’t know where I am. It’s so hard for everyone. My son is going through a growth spurt.

“My heart sinks because I’m going to have to find new clothes for him because he’s growing.”

The mum-of-two, aged 41, knows how much her gas bill is rising, but worries about what she will have to spend on electricity too.

She claims to expect the cost to treble which will hit her pockets hard.

In February, Ofgem announced the 54% energy price cap rise, the increase came into force on April 1.

To push against the rising cost of living, Jennifer, who is part of Disabled People Against Cuts Sheffield (DPAC), organised a protest which took place on April 1 and she said 10,000 people attended.

Jennifer, who was already struggling before this year’s ballooning costs, noted: “I could see [in the media] people protesting in the streets through towns across the country, but I’m stuck in my house but I wanted to be a part of that. I want my voice to be heard.

“I saw Martin Lewis on the TV one morning and he said I’ve run out of things to help, that devastated me. It was like a punch to the gut, that’s when I knew we were totally lost and we needed to come up with a solution quickly.

“It’s not just about heating or eating, it’s about life or death for families like mine.

“If it was just me affected by this, I would be ashamed I wouldn’t leave the house but it’s everyone.”

Jennifer was diagnosed with long-term chronic fatigue syndrome also known as ME and Fibromyalgia, a condition that causes pain all over the body, as a result of the trauma of being a domestic violence victim.

She is also a carer for her son, 10, who is autistic and attends a special school.

Hundreds of thousands of families across the country are thought to have joined Sunday’s Big Power Switch Off.

Jennifer acknowledged some people, especially those who are disabled, might not be able to take part in a protest like this if they have life-saving equipment in their homes such as dialysis machines.

She added: “The amazing thing about this, whether you’ve been part of a political campaign at all – people from all walks of life we found an issue, everyone is coming together.

“It worked, it actually worked. We’re doing it again on April 16 at 7pm, we know Parliament will be coming back from holiday, we want this fresh on their minds. It’s given me hope we can change this.

Responding to criticism that the Big Power Switch Off doesn’t work, she added: “For one when you’re not using energy, you’re not giving them money.

“The energy company has to estimate usage each day or week, the company then buys energy to provide for its customers. But to store energy that doesn’t get used, they have to pay to store that energy.

“The more households that take part in the protest, the more we hit their pockets. We’re going to keep doing it, we’re going to get bigger and bigger until it changes.”

Changing product offerings in shops and restaurants can lead to leaner, greener diets

Changing product offerings in shops and restaurants can lead to leaner, greener diets