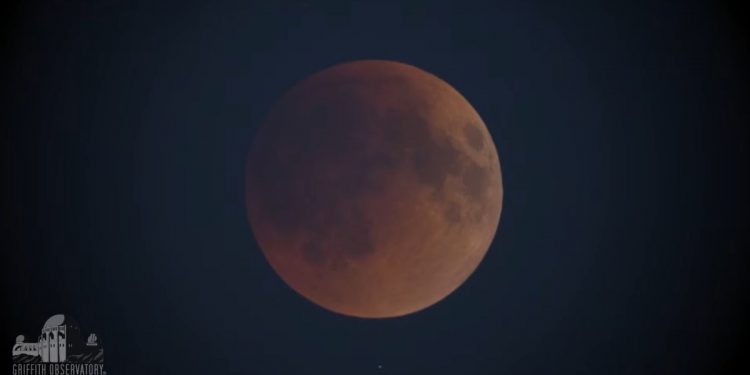 The Super Flower Blood Moon lunar eclipse of May 15 to 16 saw the moon disappearing into the deep shadow of Earth, upon which the refracted light of our atmosphere fell onto the surface. In total phase, that produced an eerie red color.

The Griffith Observatory in Los Angeles was among the institutions hosting livestreams of the event. A timelapse from the observatory, which luckily had good weather and little smog, shows a tawny-red moon glowing like a ghost above the city of angels.

Coincidentally, the eclipse happened just one day after the 87th anniversary of Griffith’s dedication and formal opening. The observatory paid tribute to the occasion in a tweet on May 14. Griffith is best known today for its public engagement and education to Californians and viewers of their webcasts.

Related: Amazing photos of the Super Flower Blood Moon of 2022

Also enjoying the sky show was the U.S. National Gemini Office, which captured the eclipsed moon in an all-sky camera, which sports a fisheye lens to maximize the visibility of meteors. This footage is in black and white, but the eclipse can’t be missed. Once the moon passes into our planet’s shadow, its brightness diminishes so much that you can see the much fainter band of the Milky Way, our galaxy.

“Note the very sharp decrease in brightness between 12 and 17 seconds,” the office wrote on Twitter Monday (May 16). The view was taken from nearby the 8.1-meter Gemini Observatory South telescope on the summit of Cerro Pachon in Chile; its partner is Gemini North on the summit of Mauna Kea, Hawaii.

The lunar eclipse, the first of 2022 and with the longest total phase in 33 years, was visible in full (weather permitting) from the Americas, western Africa and Europe.

The next full lunar eclipse will take place Nov. 8, peaking in the Pacific Ocean area and visible for skywatchers in the western United States, eastern Asia and Australia.

The twin paradox shows us what it really means for time to be relative - Space.com