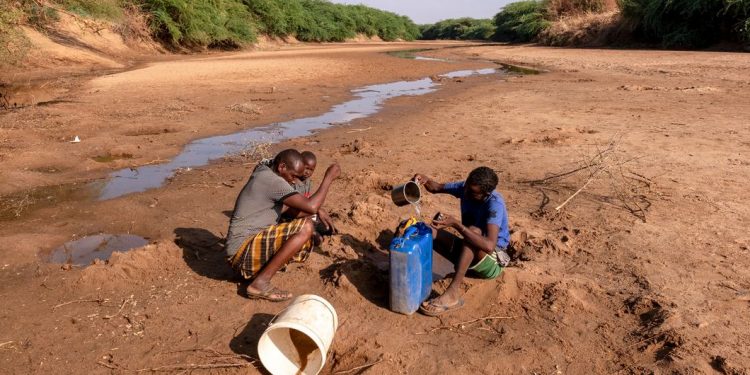 
Issuing the alert, WFP said that the figure rose to 43 million when the Central African Republic was included in the food insecurity estimate.

And the problem is not limited to rural areas as 16 million people living in urban spaces are also at risk of acute food insecurity with WFP warning that some six million children are undernourished in the Sahel.

More than 15 million people are severely affected by the drought in Kenya, Somalia, and Ethiopia.

The unprecedented impacts of multiple failed rainy seasons are threatening to create a humanitarian crisis in a region already impacted by cumulative shocks.https://t.co/NYRokkL450

From conflict and displacement to climate shocks and inflation – all made worse by the Ukraine crisis – there are many reasons for the unprecedented food emergency in the Sahel and West Africa region.

According to WFP, since Russia invaded Ukraine, prices have surged between 30 and 50 per cent in many places – and even doubled in some markets.

WFP warned that they lack enough food to cover their needs and amidst escalating conflicts, more than six million people have had to leave their homes in the Sahel.

To provide lifesaving help for the next six months, WFP urgently needs $777 million.

At the same time, the International Organization for Migration (IOM) warned that the worst drought in decades is threatening an estimated 15 million people in the Horn of Africa.

Parching landscapes, heightening food insecurity and increasingly widespread displacement has prompted IOM to so call for “an urgent and efficient humanitarian response” to avoid large-scale deterioration throughout the region.

The battered region has already been impacted by cumulative shocks, including conflict, extreme weather conditions, climate change, desert locusts and the COVID-19 pandemic.

Although the Horn of Africa has experienced climate-induced crises for decades, the current drought on the arid and semi-arid lands has been especially severe.

“There is a high risk of famine and malnutrition as the food security situation is deteriorating rapidly,” according to IOM.

As pastureland and water points are drying up across the region, pastoralist and rural communities are witnessing the death of livestock and loss of their livelihoods.

Thousands of acres of crops have been destroyed and, in Kenya alone, 1.4 million animals died in the final part of last year due to drought.

Tens of thousands of families are being forced to leave their homes in search of food, water, and pasture.

This heightens pressure on already-limited natural resources, increasing the risk of inter-communal conflict, as farming communities and pastoralist communities compete for dwindling supplies of water.

In Somalia, where some parts of the country are experiencing the worst water scarcity in 40 years, the government declared a state of emergency last November.

According to IOM’s Displacement Tracking Matrix analysis, drought conditions could imminently supplant over one million Somalis – on top of the 2.9 million already displaced.

Based on previous drought displacement patterns there, affected populations are likely to move from rural to urban centres, overwhelming critical services, including healthcare facilities, which can trigger other major health-related concerns.

IOM’s flow monitoring has recorded an increase in drought-induced movements from Somalia into Ethiopia, possibly to gain access to water and pasture.

However, Ethiopia is also suffering the dire consequences of drought, which has eroded the livelihoods of at least four million pastoralist and agro-pastoralist communities.

Drought conditions could imminently supplant over one million Somalis – IOM

To prevent a humanitarian disaster, IOM is working closely with governments, UN agencies and other partners in each country to address acute water needs of the internally displaced, migrants and vulnerable groups.

Through its operational footprint, local partnerships in Kenya, Somalia and Ethiopia, and a Rapid Response Fund mechanism in Ethiopia, IOM is well-positioned to respond to drought-affected populations throughout the region.

Despite IOM’s active response however, limited resources are driving needs to outpace capacities.

“Additional funding is urgently needed to save lives and livelihoods, mitigate further displacement, and avoid greater needs in the future,” said the UN agency.

In the longer term, the global climate crisis has underscored the need to increase disaster preparedness and climate adaptation collectively.

This must include addressing structural developmental needs of vulnerable populations and prioritizing inclusive access to natural resources.

Sustainable Fruit – The Poetry of Science