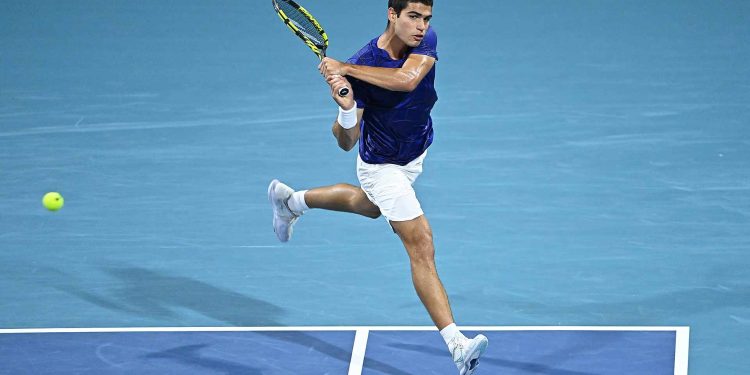 
A capacity Grandstand crowd was treated to one of the matches of the season as Carlos Alcaraz battled past Stefanos Tsitsipas, 7-5, 6-3, Tuesday night at the Miami Open presented by Itau.

In a rematch of their five-set epic at the US Open, the second installment of this budding ATP Head2Head rivalry exceeded the considerable hype with another instant classic. The same could be said for the 18-year-old Alcaraz, who has managed to overdeliver in the face of sky-high expectations early in his career, this fourth-round performance just his latest tour de force.

“It was really, really tough. He was playing unbelievable,” the Spaniard said of an opening set of the absolute highest quality — a set he thought was lost as Tsitsipas had a chance to serve it out. “All I can say is I fought until the last ball in the first set [to] come back.”

Alcaraz, who improved to 15-2 on the season with the win, is now one win from back-to-back ATP Masters 1000 semi-finals after reaching that stage for the first time at that level in Indian Wells.

After surrendering an early break to a motivated Tsitsipas, the youngster took charge of the match by winning seven straight games from 2-5 down in the first. He reached an otherworldly level in doing so, leaving the third seed perplexed as he mixed in perfectly weighted lobs and drop shots with his usual brand of bruising baseline tennis — the kind that prompted Tsitsipas to say he had “never seen someone hit the ball so hard” following their New York meeting.

Out for revenge, Tsitsipas was locked in early as he created the first five break points of the match, converting on the fifth for a 4-2 lead. The match was of sublime quality from the start, and it produced a point-of-the-year contender in the third game as Alcaraz’s tweener lob was returned by another tweener from Tsitsipas, the Spaniard finishing off the exchange with a volley winner.

Once Tsitsipas broke for 4-2, the match began to tilt in Alcaraz’s favour. The Greek fought off four break points to consolidate for 5-2, but then lost his next three service games as his opponent sustained an immaculate level to take the opening set and surge ahead in the second.

Everything was working for the Spaniard, who suddenly had his opponent chasing shadows. On the rare occasions Tsitsipas was able to attack, Alcaraz flashed his world-class defense and speed to further frustrate the World No. 5.

“I knew that Stefanos is a player who always is looking for his forehand,” Alcaraz said, describing his game plan. “I tried to hit two or three backhands cross-court and then switch to down the line, to his running forehand. It was a key. I think he lives in the backhand side all the time, looking for his forehand, as I said. It was pretty important, the backhand down the line.”

Alcaraz’s domination in that seven-game stretch, combined with an apparent sense of bewilderment from Tsitsipas, was so comprehensive that a comeback seemed out of the question.

But to his immense credit, Tsitsipas created three break points across two consecutive service games midway through the second set. After playing so solidly to bring up those chances, he let Alcaraz off the hook with a few untimely errors. It was perhaps the first time on the night Tsitsipas could truly find fault with himself, with Alcaraz taking the match out of his hands in the previous period.

On his fourth match point, Alcaraz wrapped up the win in fitting fashion, following up more heavy hitting with another drop shot winner. It was his fourth break on 11 chances in the contest.

Seeking his third ATP Tour title in the past eight months, and his first at the Masters 100 level, Alcaraz will face Miomir Kecmanovic in the quarter-finals. The Serb advanced to his fourth straight quarter-final with a 3-6, 6-1, 6-4 win over Indian Wells champion Taylor Fritz in Hard Rock Stadium. 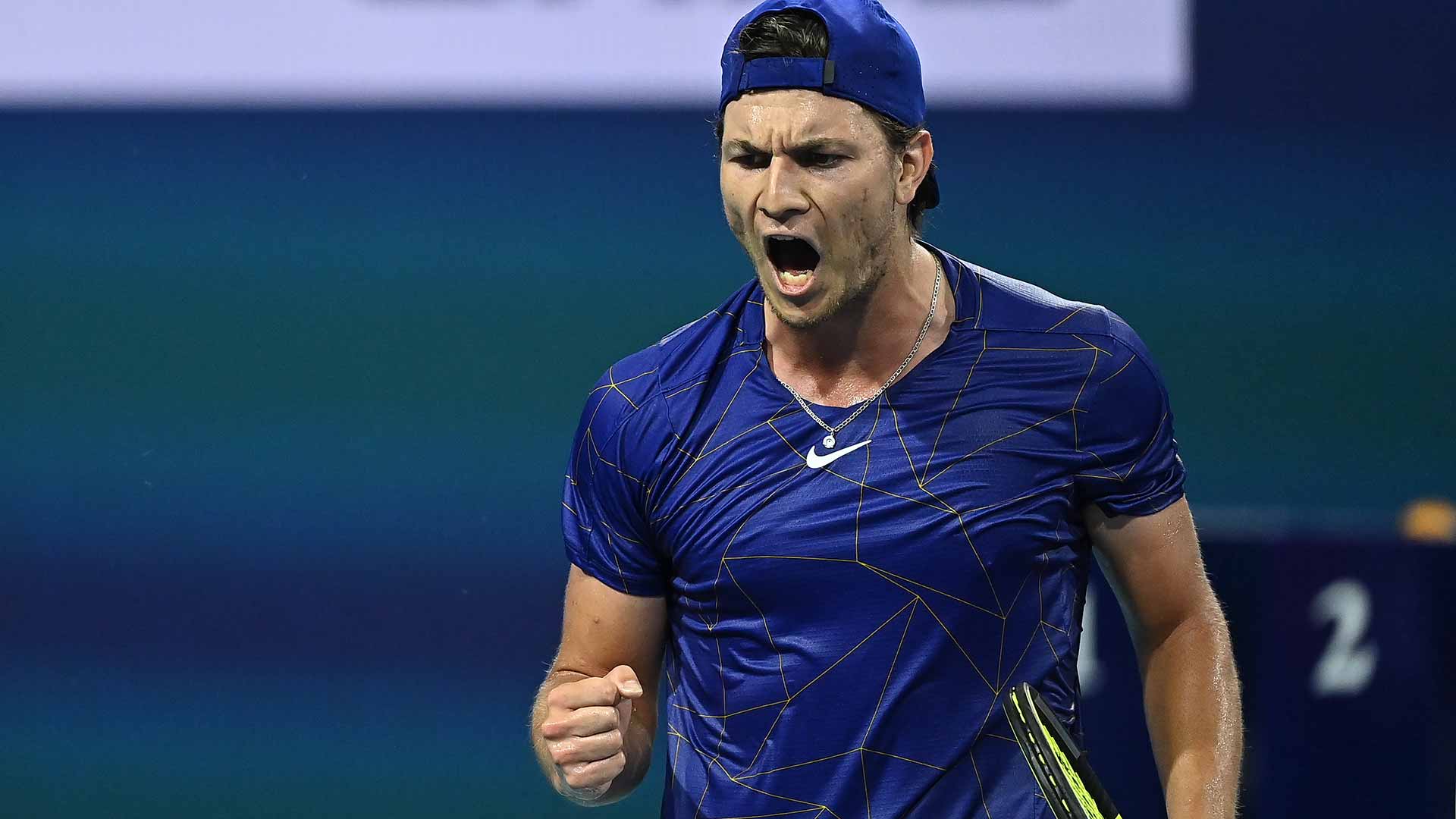 Kecmanovic outlasted the American, who was playing his ninth match in just over two weeks across the two U.S. coasts, over the course of two hours and six minutes. The 22-year-old did his damage early in sets two and three, taking the upper hand in the match by winning the first five games of the second. After Fritz saved four break points in the opening game of the final set, Kecmanovic made the crucial breakthrough to move ahead 2-1.

Fritz fought to the last ball, getting to 30-all or deuce in each of Kecmanovic’s last four service games, but the Serb saved the only break point he faced in the deciding set as he ended his opponent’s eight-match winning streak.

Prior to Alcaraz’s win on Grandstand, Hubert Hurkacz continued his Miami title defense with a 7-6(3), 6-2 win over the resurgent Lloyd Harris.

After saving two break points midway through a competitive opening set, the Pole won the last five points of the tie-break before Harris snapped back with an early break in the second. But that would be the last game the South African won in the match, as Hurkacz swept the final six games, including the final 16 points in a row.

Hurkacz sets up a showdown against World No. 2 Daniil Medvedev, who will return to the top of the ATP Rankings with a quarter-final win.

UK renters: have you joined a tenants union? | Renting property

UK renters: have you joined a tenants union? | Renting property