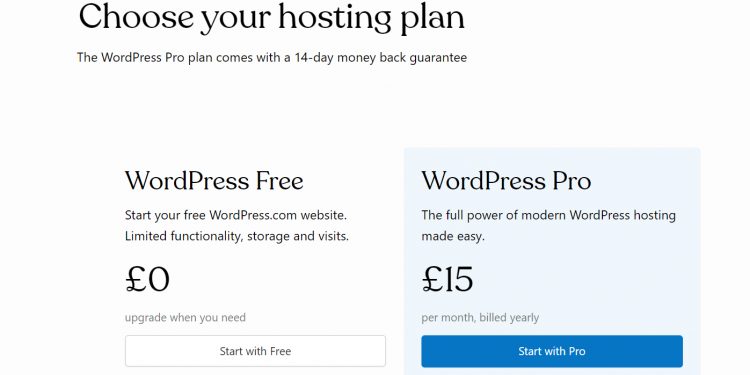 
WordPress.com has introduced major price changes without warning, replacing all of its paid plans with a single ‘Pro’ plan.

The Automattic-owned website builder has also reduced the storage on its free plan significantly, from 3GB to 500MB.

In a WordPress forum thread (opens in new tab), some users of the platform expressed their frustration with the new Pro plan, which costs $180 a year with no option to spread costs out monthly, a facility previously available with the old plans.

In response to complaints made on the WordPress forum, a spokesperson for the company said the goal with these pricing changes is to make the benefits of WordPress.com available to more people, describing the old plans as “overcomplicated” and “confusing”.

“This presently does not affect free sites prior to the new plan updates. We’ve slashed the price of our older Business plan from $25/mo to just $15/mo (paid annually),” they added.

However, despite the fact that WordPress says the changes to storage space would only affect new websites created on or after March 31, some WordPress users complained that their old sites have had the media storage space slashed to 500 MB.

The previous Business plan referenced by the spokesperson used to come with up to 200GB of storage, while the new Pro plan caps storage space at 50GB.

After a weekend of users complaining of the changes, WordPress set up a thread (opens in new tab) to collect feedback and provide clarity on new pricing changes. In the FAQ section, it acknowledged that the gap between a free plan and a $15 a month plan was large, and the company is therefore working on more “flexible à la carte options”.

TechRadar Pro reached out to WordPress.com for a comment on the changes and the rationale behind removing the option to pay monthly for services, but the company has not yet returned a response.

Via WPTavern (opens in new tab)