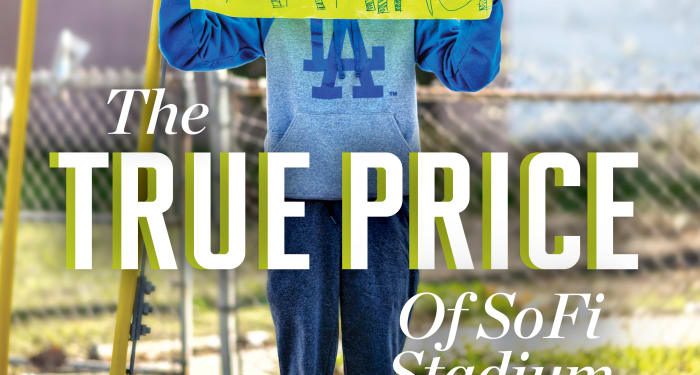 The true cost of a new stadium

At the end of December, demand for COVID-19 testing at the drive-thru, no-appointment-necessary location in a city park near my apartment spiked dramatically. Cars would start lining up hours before testing was scheduled to begin, the queue eventually stretching out of the parking lot, onto the street, across a bridge that carries a main road and onto my usually quiet street, nearly a mile away. Traffic was snarled as far as the eye could see in all directions.

That’s what I thought of when I read John Gonzalez’s story about SoFi Stadium’s impact on the city of Inglewood. The glimmering new home of the Rams and Chargers will host Super Bowl LVI on Sunday, and while you can bet on the NBC broadcast team gushing about Stan Kroenke’s $5 billion behemoth, not everyone in Inglewood is thrilled to have an NFL stadium in their backyard.

Gonzalez spoke with one Inglewood resident, Yolanda Johnson, who makes some extra cash selling parking spots at her house for games. But gameday at SoFi comes with plenty of headaches.

“​​Sometimes, just to get out of their driveway, Johnson’s husband has to stand in the street and stop traffic so she can back the car out. And if she has to run errands or work on a Sunday, things get dicey. Her job is about 15 minutes from her house—on a normal day. A couple of weeks ago, she had to work on a Sunday and it took her an hour to get home.”

Just as my neighborhood couldn’t handle the rush of people seeking COVID-19 tests, Inglewood’s infrastructure has struggled with welcoming 70,000 NFL fans 17 times a year. But the problems run deeper than traffic.

Inglewood has historically been an affordable place to live for its 108,000 residents, 90% of whom are Black, Hispanic or Latino. But the stadium, new NFL Network headquarters, 6,000-seat YouTube Theater and planned Intuit Dome (the new home of the Clippers, set to open in 2024) are attracting people and businesses to Inglewood. That’s good news for Mayor James Butts (a staunch supporter of the stadium) but many say rapid gentrification is displacing longtime residents. Estefany Castaneda, a community organizer with the Lennox-Inglewood Tenants Union, is one of those who points out the strain the stadium has placed on residents:

“Castaneda says she feels ‘a mixture of frustration and disappointment’ over the housing shortages and rising costs. She agonizes over ‘a large population of folks that are a paycheck away, a hundred-dollar increase away from having to move because the cost of living continues to go up.’”

Sunday’s Super Bowl is the first of many marquee events SoFi is set to host in the coming years (including the 2023 College Football Playoff championship and WrestleMania 39). It’ll be a spectacle of epic proportions and the NFL will no doubt want to place a spotlight on its new crown jewel stadium. But as you watch b-roll of the exterior and surrounding area, remember the people who have had their community upended by Kroenke and the NFL. Would you want the Super Bowl in your neighborhood?

🎧 Listen to the audio version of this story on our new podcast, Sports Illustrated Weekly.

Stephanie Apstein was at the women’s slalom in Beijing, where Mikaela Shiffrin shockingly missed a gate just seconds into her run after doing the same thing on Monday in the super-G:

“It was the first time she failed to finish two consecutive technical races on the senior level since 2011, when she was 16. A second straight did-not-finish was an unfathomable result, one of the most shocking sequences in Olympics history.”

Around the sports world

Here are the latest NBA trade rumors. … American Lindsey Jacobellis, competing in her fifth Olympics, finally won gold in snowboard cross. … Matt Harvey will be called as a witness in the trial related to the death of Angels pitcher Tyler Skaggs. … Bruins troublemaker Brad Marchand is facing a suspension after punching Penguins goalie Tristan Jarry. … Rob Gronkowski likes the idea of playing with Joe Burrow. … A golfer on the Korn Ferry Tour had his mom caddy for him, and she was miked up for an amazing video.

scenes from Arkansas’s upset overtime win over No. 1 Auburn:

4. This shot of the sold-out, white-out crowd

3. A shirtless Musselman in the mass of fans on the court

1. Davonte Davis’s exclamation-mark dunk (that came after the buzzer, but whatever), followed by the fans storming the court

On this day in 1979, Trevor Francis became the first player in English soccer history to command a transfer fee of over £1 million (nearly double the previous record paid a month earlier by West Brom to acquire David Mills). Which team paid the fee to Francis’s previous club, Birmingham City?

Yesterday’s SIQ: Who did the Eagles take with the first pick in the first NFL draft?

Answer: Jay Berwanger. He also holds the distinction of being the first Heisman Trophy winner, but he never played in the NFL. Berwanger asked the Eagles for a salary of $1,000 per game (about $20,000 today) at a time when most players topped out at $100 a game. The team countered with $150 and then traded his rights to the Bears. Berwanger told Chicago owner George Halas he wanted “$25,000 for two years and a no-cut contract” (about $500,000 today), and Halas didn’t even bother making a counter offer.

Berwanger told the Chicago Tribune in 1961 that he wasn’t all that interested in playing football, anyway. He wanted to get into business. He got a job as a salesman with a rubber manufacturer and in 1949 started his own rubber company. He sold the company in the early 1990s, at which point it was generating over $30 million in annual sales, according to the Tribune. Jay Berwanger Inc. is still around today, making a variety of rubber and plastic products for industrial applications.

In 1976, two New Yorkers led Tennessee to its first men’s NCAA tournament appearance in nine years. The Volunteers’ 14–2 start landed the high-scoring combination of Bernard King and Ernie Grunfeld on the cover of the Feb. 9 edition of Sports Illustrated.

King, from Fort Greene, Brooklyn, and Grunfeld, born in Romania and raised in Forest Hills, Queens, did it all for Tennessee that year. King averaged 25.2 points and 13 rebounds per game as a sophomore, while Grunfeld, a junior, averaged 25.3 points and 6.4 rebounds. They led the Vols to a 21–5 regular-season record (14–4 in the SEC, one game behind conference champion Alabama). But after getting an at-large bid to the 32-team NCAA tournament, Tennessee was knocked out in the first round by VMI. King missed the game with a thumb injury, and although Grunfeld scored 36 points, the Cadets scored the upset. Tennessee coach Ray Mears had King put on his uniform at halftime in an attempt to inspire the team, but it didn’t work.

Barry McDermott wrote in his SI cover story that NBA scouts thought Grunfeld was “equal—or perhaps superior—to King, because he is so rugged.” But King went on to have a much better pro career. He was belatedly inducted into the Hall of Fame in 2013. Grunfeld had a solid nine-year career as a bench player and reunited with King for four seasons with the Knicks from 1982 to ’86. He went on to become the general manager of the Knicks and Bucks before leading the Wizards as president of basketball operations.

PUBG creator Krafton is getting into NFTs • Eurogamer.net

PUBG creator Krafton is getting into NFTs • Eurogamer.net