MailOnline compared branded versions of 20 different staples, including bread, cereal and pasta sauce, to the versions made by Tesco, ASDA, Sainsbury’s, ALDI and Waitrose.

Out of 80 different measures, the biggest brands were only deemed the healthiest option a quarter of the time.

Haagen-Dazs vanilla ice cream has nearly triple the amount of calories and more than double the fat, Dolmio’s pasta sauce and Heinz ketchup had twice the salt and Red Bull had four times the amount of sugar than supermarket-own products.

Everyone in Britain faces a mammoth hit to their budgets, with council tax, car tax, national insurance, water bills and the cost of broadband, phones and TV all going up from today.

This assault on household budgets will add another £900 to annual bills, not including the eye-watering additional cost fueled by Russia’s invasion of Ukraine and a global oil shortage because of post-pandemic demand. Energy bosses have even admitted some Britons will face the choice between heating and eating.

Campaign groups Action on Sugar and Action on Salt told MailOnline that many of the more expensive branded products ‘aren’t always better either for your health, or your wallet’.

‘In a cost-of-living crisis, these companies are profiting on the back of our health and the Government should stand firm by its commitment to restrict junk food promotions by October,’ they said.

A salt-heavy diet can raise blood pressure, increasing the risk of heart disease and stroke, while too much sugar can lead to weight gain. Consuming too much fat can raise cholesterol levels.

Britons are advised to eat no more than 6g of salt (around one teaspoon) and 30g of added sugar (approximately seven sugar cubes) each day. Men are told to stick to 2,500 calories a day, while women are advised to consume 2,000. 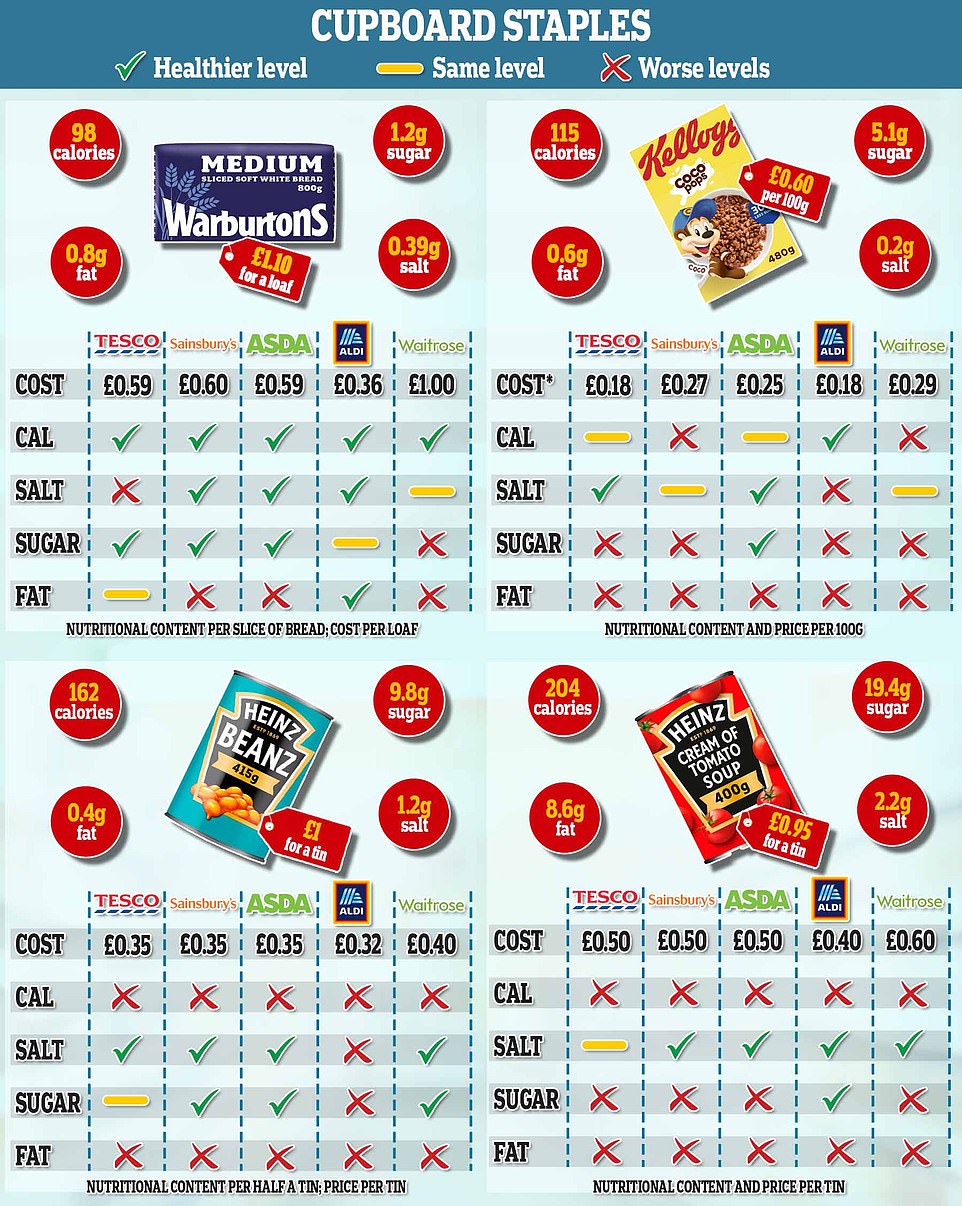 The graphics show the amount of calories, salt, sugar and fat in the branded version of products, as well as its price. The table underneath each product shows the cost for the same quantity of the product, when buying supermarkets’ versions of the goods. Green ticks means the product has a healthier level of calories, salt, sugar or fat than the branded version, while yellow lines mean the figure is the same for both products and red crosses mean the branded food is healthier for that measure 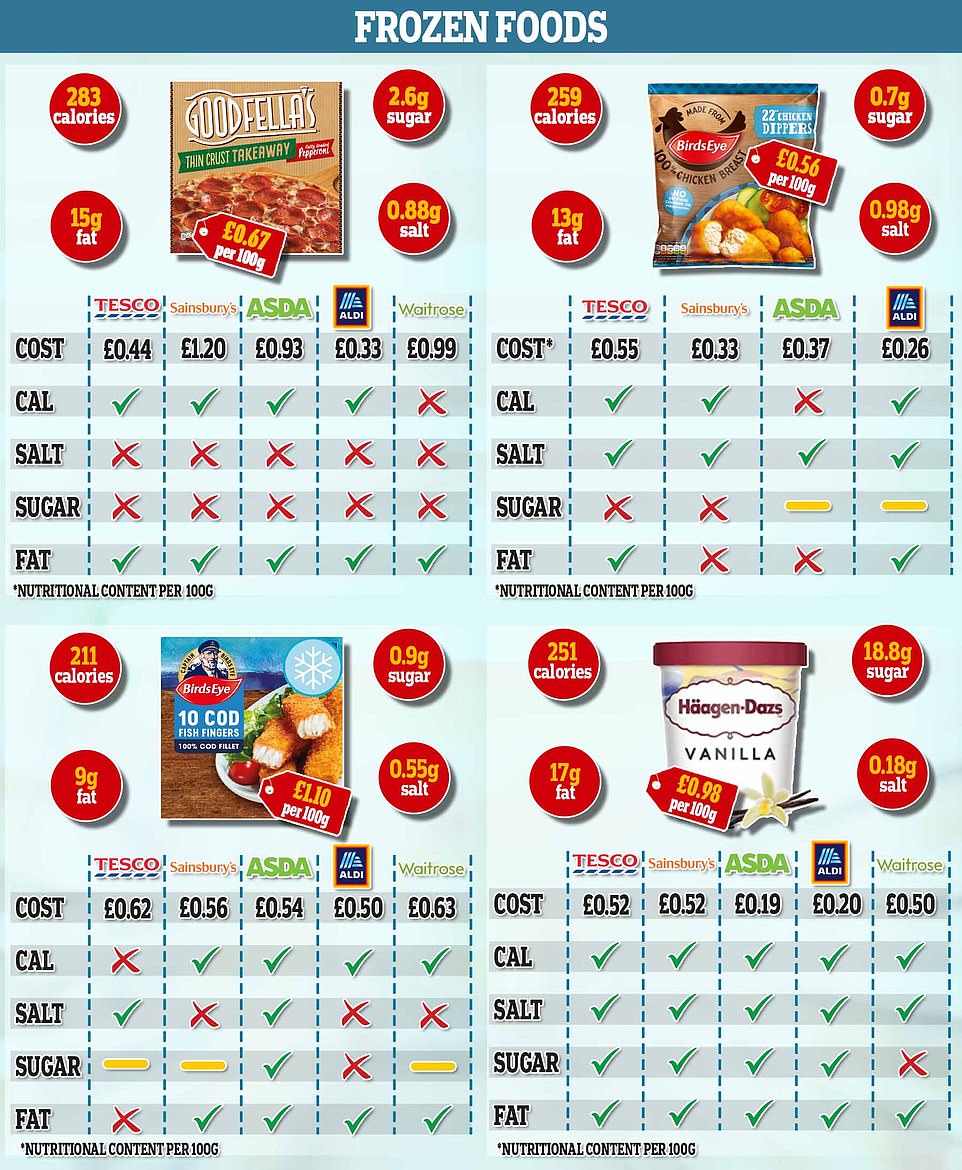 HOW MUCH SALT SHOULD I EAT?

Eating too much salt can increase blood pressure and the risk of heart disease and stroke.

Adults should eat a maximum of 6g of salt per day.

Between 75 and 80 per cent of the salt people eat is in processed and convenience foods, such as sauces and meat.

For every gram of salt cut from Britons’ average daily intake, there would be 6,000 fewer deaths from strokes and heart attacks per year.

Most labels now give the amount of salt contained in food per portion.

Foods are considered to be low salt and have a green label if they contain less than 0.3g per 100g.

Products with medium salt levels have less than 1.5g per 100g, which is indicated through an amber label.

And products with high amounts of salt have a red label, meaning they contain 1.5g per 100g or 1.8g per portion.

MailOnline analysed the nutritional content of some of the nation’s most popular products, including cupboard staples, sauces and frozen foods.

Meanwhile, Heinz’s tomato ketchup (50 pence per 100g) costs four times more than Tesco’s own (12 pence per 100g), but includes 23 per cent more sugar and double the levels of salt.

And energy drink Red Bull (£2.15 for a 473ml can) has four times more calories and sugar, as well as half the salt levels compared to ALDI’s Red Thunder beverage, which costs a third of the price (36 pence for a 250ml can).

However, some branded products were healthier than cheaper options.

Katharine Jenner, nutritionist and director at Action on Sugar and Action on Salt, told MailOnline: ‘It’s quite clear from the high levels of salt, sugar and fat found that many of the more expensive branded food products aren’t always better either for your health, or your wallet.

‘The profits these huge multinational food companies make from HFSS [high in fat, sugar and salt] products tend to be invested into marketing tactics, rather than more nutritious ingredients.

‘Well-known brands often use price promotions such as buy two get one free – which results in spending more and eating more every time you shop. 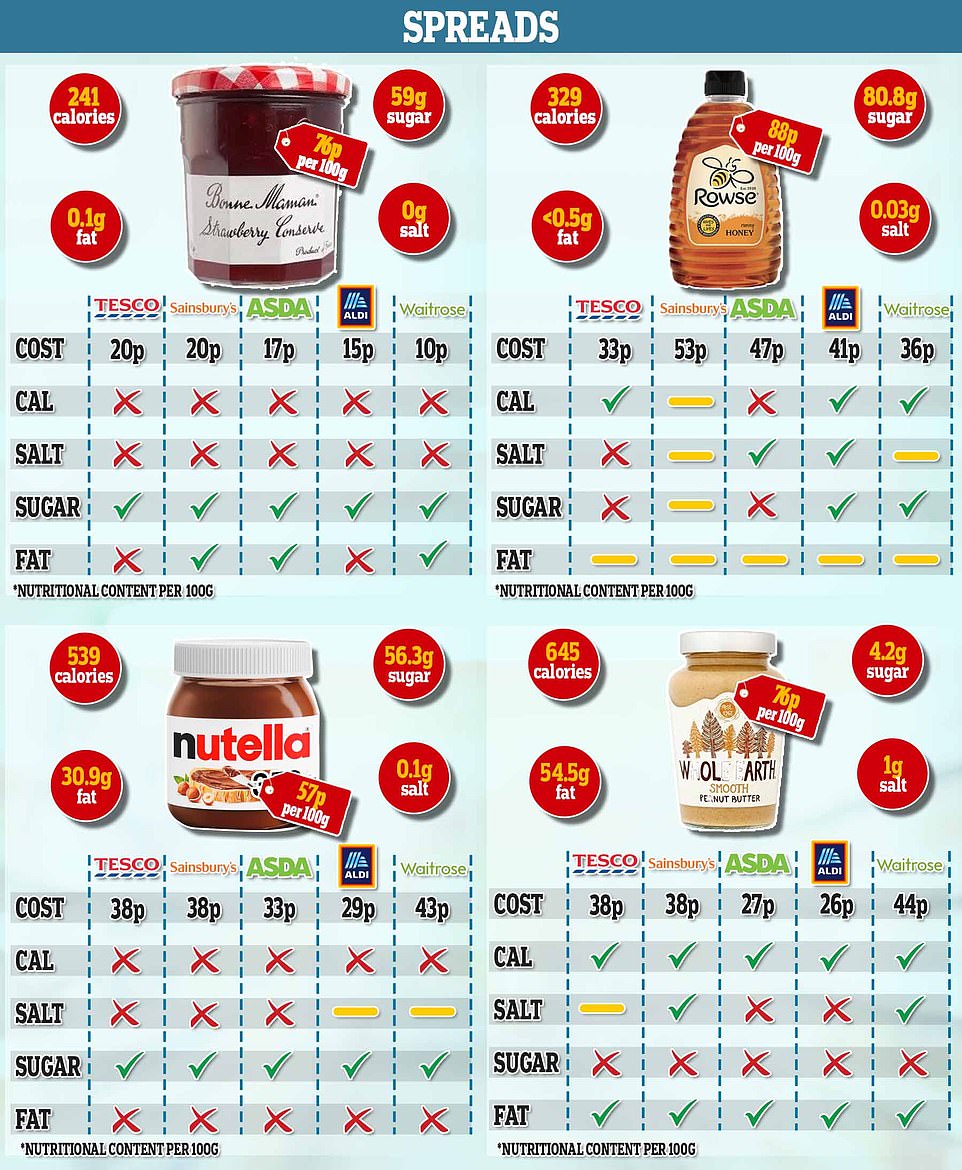 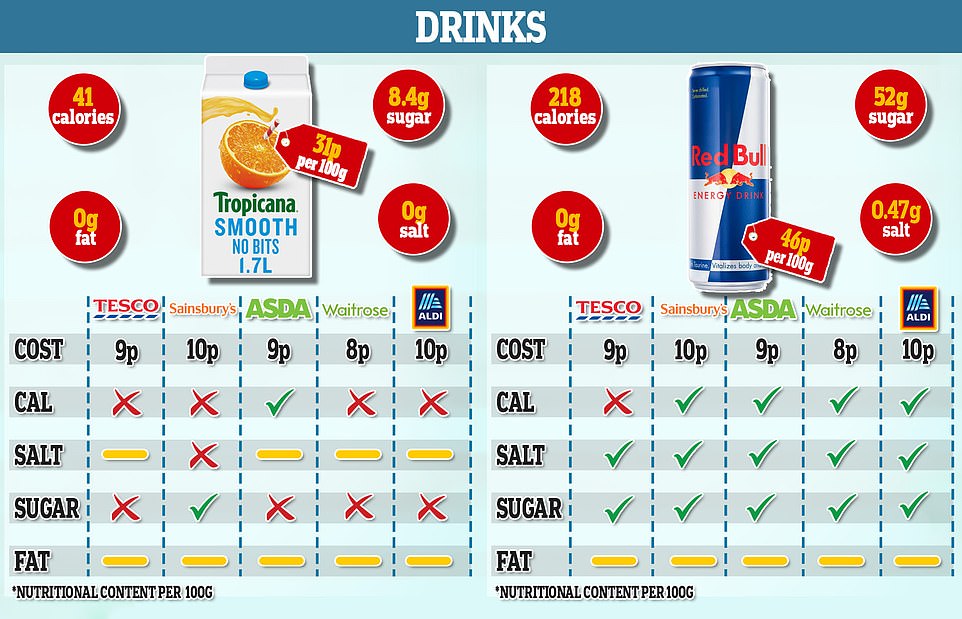 HOW MUCH SUGAR SHOULD I EAT?

Eating too much sugar can lead to weight gain and tooth decay.

The type of sugars most adults and children in the UK eat too much of are “free sugars”, which includes any added to food and drink and sugars in honey, syrup and fruit juice.

But sugar found naturally in milk, fruit and vegetables do not count as free sugars.

Adults are not supposed to have more than 30g of free sugars a day – around seven sugar cubes.

Children aged seven to 10 should have no more than 24g of free sugars (six sugar cubes), while those aged four to six should not have more than 19g (five sugar cubs).

Eating too much sugar can mean consuming too many calories, leading to weight gain.

Being overweight increases the risk of suffering heart disease, type 2 diabetes and some cancers.

Sugar is also one of the main causes of tooth decay.

Health chiefs advise Britons to have no more than a 150ml glass of fruit juice and smoothies per day and limit the amount of foods with high levels of free sugars.

‘In a cost-of-living crisis, these companies are profiting on the back of our health and the Government should stand firm by its commitment to restrict junk food promotions by October.’

The Prime Minister announced a crackdown on obesity in 2020 after a near-fatal bout of Covid which he attributed to being overweight.

More than a third of adults in England are overweight and more than a quarter are obese, official figures show.

As part of the plan, new laws restricting offers on foods high in fat, sugar and salt are due to come into effect in medium and large shops in October. Junk food giants will also be banned from advertising online and before 9pm on TV by January 2023.

No10 is also planning to end ‘buy one, get one free’ promotions for unhealthy food and stop the products from being placed in prominent locations in shops, such as entrances and checkouts.

Restaurants, cafes and takeaways will be required to list the calories on their menus from Wednesday.

And through the NHS, Britons can now get access to apps as well as free or discounted membership to gyms and programmes such as Weight Watchers to help them shed weight.

But there are concerns Mr Johnson may dilute or drop some of these plans to appease Tory MPs who oppose nanny-state interventions.

Professor Gunter Kuhnle, an expert in nutrition and food science at the University of Reading, told MailOnline that people can switch from branded to unbranded products as the differences for most products are ‘quite small and probably not really that meaningful’.

He said: ‘For most foods, it seems that the differences are not really that big and probably not that important if they’re part of a normal diet.

‘I’m not sure people are aware that the food composition data are more estimates than precise figures – a lot of people consider them to be much more accurate than they actually are.’

But he added that Red Bull is clearly the ‘most outstanding option because it contains ‘so much more sugar’, which may be because the sugar tax has pushed the company’s supermarket rivals to change their recipes.

Hell for households: How much more YOU will be paying in bills from April 1 (and it’s no joke) 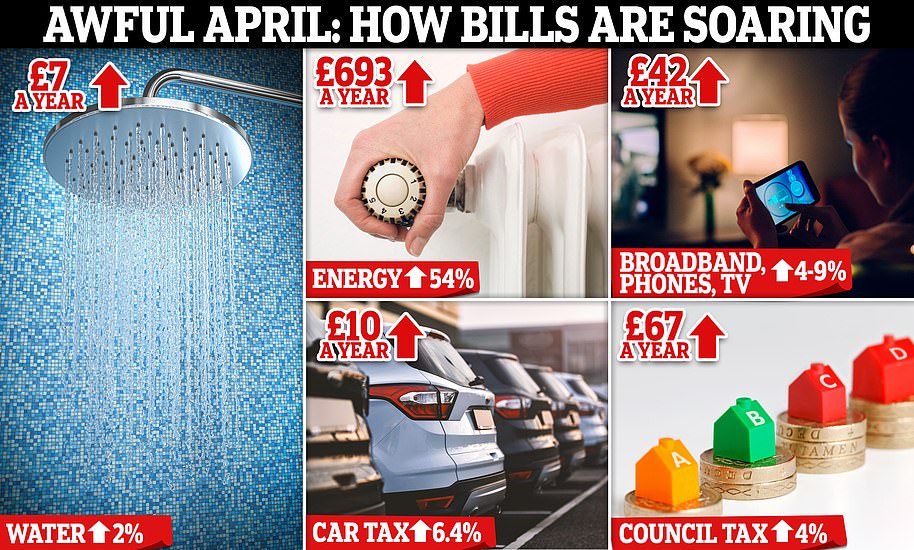 Annual energy bills will soar by 54 per cent today as regulator Ofgem raises the price cap for an average home to £1,971 from £1,277. Experts believe it will be £600 more from October.

Fuel prices have surged to a record high of £1.66 a litre of petrol and £1.78 for diesel as it emerged that motorists have been hit by daily increases for six weeks.

The cost of filling up a typical family car with a 55-litre tank is now £81.41, up from £58.56 in May 2020, when petrol prices plunged because of the first coronavirus lockdown.

More than half of town halls will charge over £2,000 in average council tax bills this April. The typical Band D bill in England will be £1,966 – up 3.5 per cent on last year. The highest in the country will be in Rutland, where residents will receive bills of £2,300. The highest increase is in Sandwell in the West Midlands – up by 5.2 per cent. For the first time, more than half of local authorities will charge in excess of £2,000 for Band D households.

National insurance increases worth around £6billion are taking effect in a few days.

Sky is hiking prices of broadband and TV channels by an extra £43 a year from April in a fresh cost of living blow. Families will need to fork out an additional £3.60 a month, Sky estimates, as it raises the costs across its services.

Sky joins other broadband and TV providers such as Virgin Media, which is already set to hike prices by an average of 4% from March 1, 2022.

And BT, TalkTalk and Vodafone are increasing prices by as much as 9%.

A cut in VAT has ended meaning landlords say they must add 20p or more to the cost of a pint. To make ends meet they say that £7 a pint might be needed in some London pubs.

Britons will face paying up to £3 per lateral flow test from April 1, despite French supermarkets offering them for three-times cheaper.

The Prime Minister scrapped ‘free’ lateral flow tests from today. People who opt to keep testing face spending £20 for a box of seven — around £3 per test.