Supermassive black holes will smash into each other and warp space and time, scientists warn 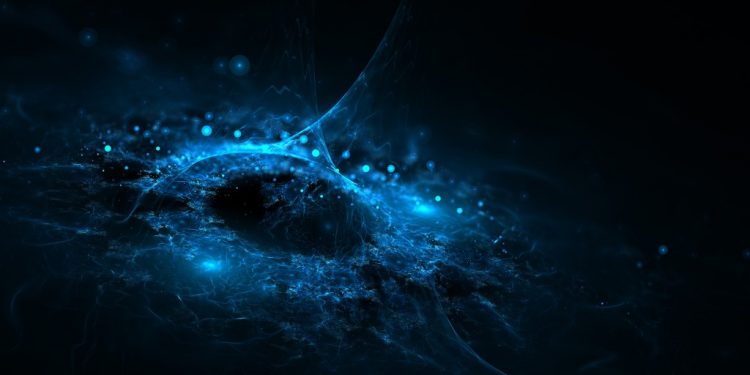 
Two massive black holes will merge in 10,000 years, in a collision that will send ripples across the universe, a new study finds.

The research, led by a team of astronomers from CalTech, found that two colossal black holes, about 9 billion light-years away in deep space, are revolving around one another every two years.

Each of the supermassive black holes has a mass that is hundreds of millions of times larger than that of our sun.

Furthermore, the two bodies are relatively close at just 1,950 astronomical units apart (about 50 times more than the distance between our Sun and Pluto)

The two objects are due to collide about 10,000 years from now, in a clash so intense that it will send gravitational waves across the fabrics of space and time.

The study, titled The Unanticipated Phenomenology of the Blazar PKS 2131–021: A Unique Supermassive Black Hole Binary Candidate, was published in The Astrophysical Journal Letters on Wednesday.

The authors say that despite the fact that galaxy mergers are not uncommon, “there are relatively few instances of two galaxies with supermassive black holes (SMBHs) in their nuclei being seen in the actual process of the merging.”

The researchers discovered the two bodies in an energy-packed object known as a quasar, which is a highly-luminous and active galactic nucleus that is powered by a supermassive black hole.

According to CalTech, some quasars’ supermassive black holes shoot a jet out at near the speed of light – in the new study, the quasar, designated PKS 2131-021, belongs to a subclass of quasars called blazars that shoot its jet toward our Earth.

The researchers posit that PKS 2131-021, which has been observed for over 45 years, is now the second known quasar with a pair of supermassive black holes that are due to merge.

The first known quasar is dubbed OJ 287, and it possesses two black holes that are further apart and circle one another every nine years.

So how do two supermassive black holes merge?

Typically when galaxies come together, their black holes are drawn in towards the middle of the new conjoined galaxy and eventually form an even bigger black hole.

And as the black holes are merging, their massive force disrupts the fabric of the universe with gravitational waves.