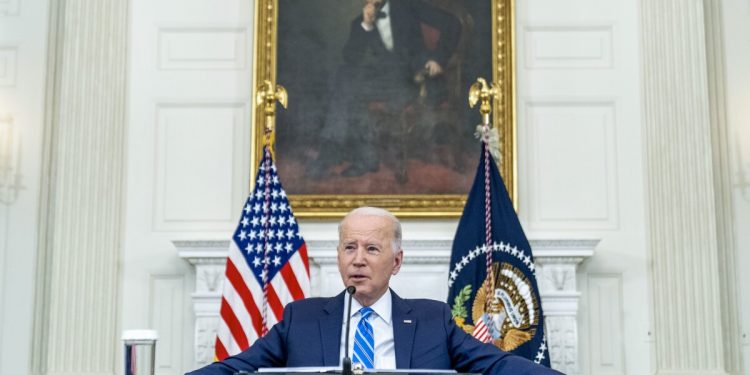 Supreme Court Justice Stephen G. Breyer’s retirement provides President Biden and Democrats a golden opportunity to move past recent setbacks and reenergize Black and progressive voters ahead of the midterm.

That is, if everything goes smoothly.

Appointing the nation’s first Black female Supreme Court justice, as Biden has pledged to do, could blunt the political headwinds Democrats are facing in the November election, particularly amid Biden’s sagging approval ratings and after the back-to-back defeats of voting-rights legislation and his massive “Build Back Better” spending bill.

But given the perilous nature of Democrats’ razor-thin Senate majority and an already crowded legislative calendar, the addition of a Supreme Court confirmation process has the potential to exacerbate existing intraparty tensions and further complicate the push to enact more of Biden’s legislative agenda.

“This comes at the perfect time for this White House,” said Jim Messina, a former White House aide to President Obama and his 2012 campaign manager.

Messina said a Supreme Court confirmation process could give Democrats a cooling-off period after the collapse of Biden’s $1.7-trillion social safety-net bill, which was derailed by the opposition of centrist Sen. Joe Manchin III (D-W.Va.).

“In short term, no one is going to be focused on ‘Build Back Better,’” he said. “And this allows the hurt feelings time to heal and they can reset that relationship.”

But balancing the confirmation push with other legislative priorities could be complicated. If recent history is a guide, the confirmation battle would consume all the oxygen in the Senate as soon as Biden announces a pick. And if the vote runs into trouble, it could eat up even more time as Senate Majority Leader Charles E. Schumer (D-N.Y.) and fellow Democrats try to pull together a majority.

Biden cut off questioning about Breyer’s retirement Wednesday afternoon, deferring to the justice, who has yet to officially announce his retirement.

“Let him make whatever statement he’s going to make, and I’ll be happy to talk about it later,” the president said during an event with CEOs in the State Dining Room of the White House.

Schumer spoke more openly. “We want to move quickly,” he said in New York on Wednesday. “We want to get this done as soon as possible.”

Senate Democrats say they plan to use Republicans’ timeline on Justice Amy Coney Barrett’s 2020 nomination as a model, according to a person familiar with Schumer’s thinking. In that case, it was only a month between the nomination and full Senate confirmation, a far quicker timeline than the historical average of two months, according to nonpartisan congressional statistics.

The clock would start as soon as Biden makes a nomination. Once that happens, Senate Democrats are confident they would be able to hold hearings and vote in the full Senate before Breyer steps down, according to Democratic aides.

Still, the nomination process will be a high-wire act. It is likely to test whether the relationship between centrists Manchin and Sen. Kyrsten Sinema (D-Ariz.) and the rest of the Democratic Party has worn beyond repair after weeks of frustration over the pair’s reluctance to support Biden’s social spending and climate bill and opposition to his efforts to lift the Senate filibuster rule in the case of voting rights legislation.

In the 50-50 Senate, Democrats will need every member’s vote, and the votes of the two independents who caucus with them. For any Democrat they lose, they would have to pick up a Republican.

Given Senate Minority Leader Mitch McConnell’s (R-Ky.) longtime focus on building a conservative Supreme Court, he is certain to push Republicans to oppose any Biden nominee.

But Democrats could have a shot at picking up the support of Sen. Susan Collins of Maine, who supported every Supreme Court nominee to come before her until Barrett, or Sen. Lisa Murkowski of Alaska, who opposed Obama’s nominees but split on Trump’s.

“If all Democrats hang together — which I expect they will — they have the power to replace Justice Breyer in 2022 without one Republican vote in support,” said Sen. Lindsey Graham of South Carolina, the top Republican on the Senate Judiciary Committee. “Elections have consequences, and that is most evident when it comes to fulfilling vacancies on the Supreme Court.”

Still, one unexpected resignation or death of a Democratic senator could flip control into the hands of McConnell, who could choose to block any action on the nomination, as he did with Obama’s nomination of Judge Merrick Garland to the Supreme Court in 2016.

Senate Judiciary Committee Richard J. Durbin (D-Ill.) said he plans to move any Biden nominee “expeditiously” through his committee, a sentiment echoed by several other senators.

“I am ready to move as quickly as possible to consider and confirm a highly qualified nominee,” said Sen. Patty Murray (D-Wash.), adding that she wants to see a nominee “who will break barriers and make history as the first Black woman on the Supreme Court of the United States.”

Sen. Dianne Feinstein (D-Calif.) said there is plenty of time to confirm a nominee and ensure there is no gap on the bench. “With six months until Justice Breyer departs the court, the Senate Judiciary Committee will have ample time to hold hearings on President Biden’s nominee,” she said.

Breyer has not explicitly said he will stay through the end of the term in June, although that is what many Democrats expect.

A quick confirmation battle could prove advantageous to Republicans, who are favored in this year’s midterm election, according to GOP strategist Scott Jennings, who is close with McConnell.

“The general strategic view is Republicans have a great environment that’s largely a referendum on Biden, on the economy, crime and schools. Anything that takes away from that conversation is not good,” he said.

“It may be one of the rare moments where the strategic interests of Schumer and Republicans are in alignment,” he quipped.

“For voters who have made the Supreme Court the top issue, they’ve already decided which party they’re going to vote for. They’re already energized,” he said. “If Biden fails to confirm a justice, that would further depress Democrats and could hurt Democratic candidates in 2022.”

A successful appointment, however, could help ensure that Democratic voters turn out in November, said Matt Grossman, a professor of political science at Michigan State University.

“It’s not very likely to win anyone over that’s not already on [Biden’s] side,” Grossman said. “It might bring everyone who is on that side to be more in the fight.”

But there is no denying that news of Breyer’s retirement offers Democrats a much-needed opportunity to shift, even briefly, the political narrative and rally the party’s underwhelmed base behind a history-making nominee at a time when the court is considering a case that could unravel the Roe vs. Wade decision that guarantees abortion rights.

Amid surging inflation, the disruptive Omicron coronavirus variant and increasing public fears about crime and safety, Biden has been unable to improve his slumping approval numbers, which have been stuck for months just over 40%.

The decline is most marked among members of his own party. A poll released this week by the Pew Research Center found that roughly three-quarters of Democrats give high marks of the president’s job performance, down from 91% in March of last year. The drop-off is even steeper among voters that lean Democratic, whose approval has plunged 20 points and now sits at 56%.

The upcoming court vacancy also gives Biden a chance to gain ground with Black voters, the backbone of the Democratic coalition. With his failed push to advance voting rights protections and the absence of major criminal justice legislation, Biden could make up ground with this key constituency by fulfilling a campaign promise to nominate a Black woman to the court.

“It will allow the president to have a base moment that will make everyone happy, and there just aren’t that many of those,” said Messina, the former Obama aide. “With legislation, people are frustrated afterward they didn’t get all they wanted. But when you pound the Senate gavel down on a new Supreme Court justice, that is a home run moment.”

US Federal Reserve to start hiking interest rates in March