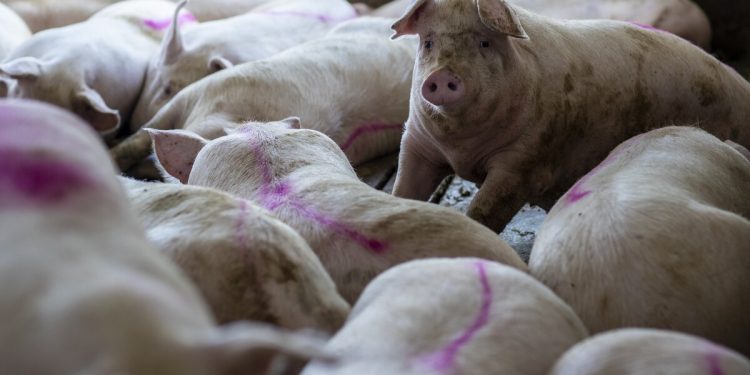 The Supreme Court on Monday agreed to hear a constitutional challenge to a California ballot measure that would force pork producers across the country to end “extreme methods” of confining breeding pigs.

The justices will review Prop. 12 and its provisions against animal cruelty, and decide whether out-of-state producers may be required to change their practices if they want to sell their products in California.

The court’s action casts some doubt on the future of the state measure, which has forced major changes in the egg and veal industries.

Nearly 63% of California voters approved Prop. 12 in 2018 to “prevent animal cruelty by phasing out extreme methods of farm animal confinement, which also threaten the health and safety of California consumers and increase the risk of food-borne illness.”

The state’s lawyers told the court that the measure “will bar the in-state sale of meat from breeding pigs denied at least 24 square feet of usable floorspace. A stall or enclosure with internal dimensions of six feet by four feet, for example, would satisfy that standard. A typical breeding pig is about six feet long and 23 inches wide when lying down.”

Several large meatpacking companies, including Hormel, announced they would comply with California’s law, but the National Pork Producers Council and the American Farm Bureau Federation went to court arguing the state was violating the Constitution’s protection for the free flow of interstate commerce.

California and its voters should not be permitted “to upend an entire nationwide industry in this way,” they said in their appeal to the high court.

While “California residents consume 13% of the nation’s pork,” they said “99.9% of pork sold in the state derives from sows raised out-of-state. Consumers everywhere will pay for Prop. 12, disrupting supply and demand nationwide.”

A federal judge in San Diego dismissed their suit on the grounds the producers had no claim of a constitutional violation, and the 9th Circuit Court of Appeals agreed last year.

The Constitution says Congress has the power to “regulate commerce … among the several states.”

Early in U.S. history, the Supreme Court took a broader view and said states may not interfere with or discriminate against interstate commerce, even if Congress takes no action.

In recent decades, however, the high court has been increasingly reluctant to strike down state laws for violating what judges often refer to as the “dormant Commerce Clause.”

In dismissing the suit from the pork producers, U.S. appellate judge Sandra Ikuta said states violate the commerce clause “only in narrow circumstances…. A state law may require out-of-state producers to meet burdensome requirements in order to sell their products in the state without violating the dormant Commerce Clause,” she wrote for the 9th Circuit.

“Even if a state’s requirements have significant upstream effects outside of the state, and even if the burden of the law falls primarily on citizens of other states, the requirements do not impose impermissible extraterritorial effects,” she wrote.

The justices spent weeks weighing the industry’s challenge before agreeing to hear the appeal in National Pork Producers vs. Ross.