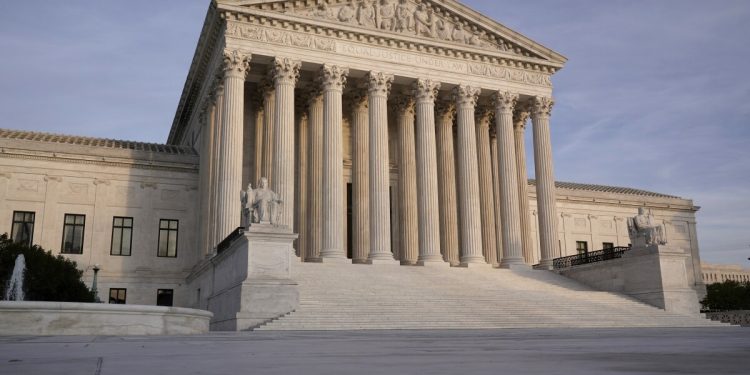 President Biden’s plan to require about 100 million employees to be vaccinated against COVID-19 faces a major challenge in the Supreme Court on Friday.

Attorneys for 27 Republican-led states and dozens of business groups argue that Biden has overstepped his authority, and they come before a conservative court that is increasingly skeptical of new and far-reaching federal regulations.

They asked the justices to issue an order that blocks Biden’s rules from taking effect. But before doing so, the court said it would hear arguments from both sides in a pair of related cases.

In the first, the court will decide whether the administration can require employers with 100 or more workers to ensure either all employees are vaccinated or undergo weekly tests for COVID-19. This rule is based on the Occupational Safety and Health Act of 1970, which gives the Labor Department the authority to issue an “emergency temporary standard” to protect “employees [who] are exposed to grave danger from exposure to substances or agents determined to be toxic or physically harmful or from new hazards.”

The administration says the virus is a “new hazard” that represents a grave danger, one that has already killed more than 800,000 Americans.

The Republican lawyers say the virus is not a distinctly “occupational” danger. OSHA “may only regulate work-related dangers,” and the virus spreads everywhere, argued Ohio Atty. Gen. Dave Yost in a brief filed this week along with the other 26 Republican states. Lawyers for businesses also said companies would lose vital workers if a vaccine mandate were put into effect.

When Biden first announced the rule in September, the White House said it could affect 84 million employees nationwide. Conservative judges quickly put the rule on hold, but on Dec. 17, the Ohio-based 6th Circuit Court of Appeals, in a 2-1 decision, lifted those orders and said the rule may take effect.

That set the stage for the high court to take up the issue on a fast-track basis. The lead case is called National Federation of Independent Business vs. Department of Labor.

In the second set of the cases, the court will decide whether hospitals, nursing homes and other facilities that serve Medicare and Medicaid patients must require their workers to be vaccinated.

This requirement is based on Medicare and Medicaid rules that say facilities receiving federal funds must meet the standards that federal health officials determine are “necessary in the interest of the health and safety” of their elderly and sick patients.

But Republican state attorneys sued and won rulings from Trump-appointed judges in Missouri, Louisiana and Texas who put the rule on hold in 25 states. They said hospitals in rural areas would lose employees if they were told they must be vaccinated.

The case before the court is called Biden vs. Missouri.

RAT shortages and self lockdowns hit workers and businesses