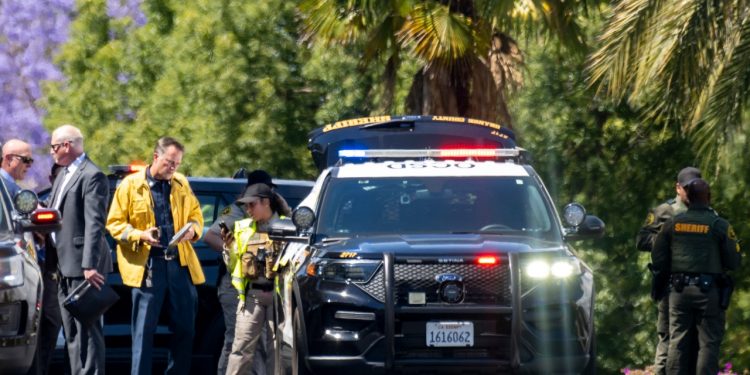 The suspect in the Laguna Woods church shooting that killed one person and wounded five others was identified Monday as a 68-year-old Las Vegas man.

The gunman, identified as David Chou, was booked on one count of murder and five counts of attempted murder in connection with the Sunday afternoon shooting at Geneva Presbyterian Church on the 24000 block of El Toro Road, according to the Orange County Sheriff’s Office.

Authorities are still trying to determine the motive behind the violence at the church.

The attack happened during a lunch banquet after the morning service at Geneva Presbyterian, where dozens of people were gathered.

One man was shot and killed. His identity is being withheld pending notification of his family.

The shooting came to an end when, in an act of “extraordinary heroism,” the church’s congregants overpowered the suspect and hogtied him with an extension cord until first responders arrived, authorities said.

A churchgoer told the Los Angeles Times that the pastor hit the gunman with a chair as he was reloading his gun and other churchgoers tackled him.

“I think it’s safe to say, had people not intervened, it could’ve been a lot worse,” Undersheriff Jeff Hallock said Sunday. “There were 30 to 40 people inside.”

After the deadly shooting, investigators reported finding two handguns at the scene.

Since the guns were serialized, the Bureau of Alcohol, Tobacco, Firearms and Explosives placed an “urgent trace” on the firearms to determine who bought them, officials said.

The shooting in Orange County came just one day after a gunman opened fire at a supermarket in Buffalo, New York, killing 10 people.

“It is horrifying to be grieving yet another tragic shooting in just 72 hours – another weekend in America defined by senseless violence,” Democratic Congressman Adam Schiff said in a statement.

“No one should have to fear going to their place of worship. Our thoughts are with the victims, community, and all those impacted by this tragic event,” the statement read.