Swedish Prime Minister loves System Of A Down, plays their music at parties 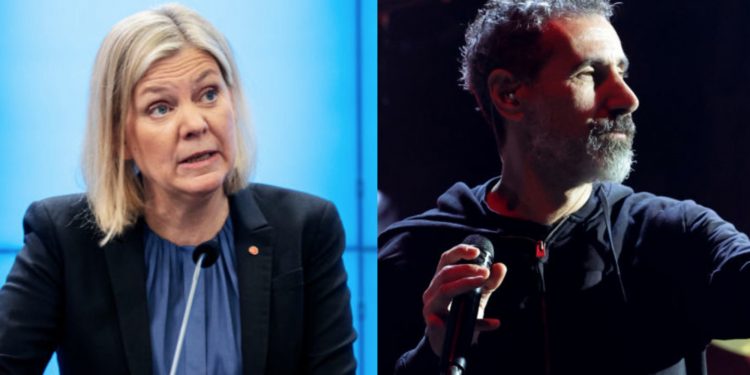 
Swedish Prime Minister Magdalena Andersson has revealed she’s a big fan of System Of A Down.

Speaking in a new interview with national radio station Bandit RockAndersson – who last year became the first female to be elected to the commanding position in Sweden’s history – was quizzed about her musical tastes.

“When it comes to rock, it’s System Of A Down,” she told hosts Bollnäs-Martin and Richie Puzz.

Asked whether Serj Tankian and co. were part of her listening habits at home, Andersson replied: “Yes, absolutely, and when it’s [a] party!” However, she admitted she’s never the one in charge of DJ-ing these parties. She leaves that up to her husband.

“No matter what kind of party, my husband takes over,” she said.

Last month, Cassetteboy released a new parody video in which they once again take aim at the UK’s Prime Minister Boris Johnson.

For their latest release, the satirical duo repurposed Rage Against The Machine‘s 1991 protest anthem ‘Killing In The Name’ in response to recent allegations that Downing Street hosted various parties during lockdown.

Meanwhile, in November, System Of A Down frontman Serj Tankian unveiled a new virtual exhibition titled ‘Not For Touching – The Intangible Composition’.

Presented by CurioNFT, the collection comprises 21 pieces of work spanning “mergers of art, music, digital paintings and animation”, according to a tweet from Tankian.