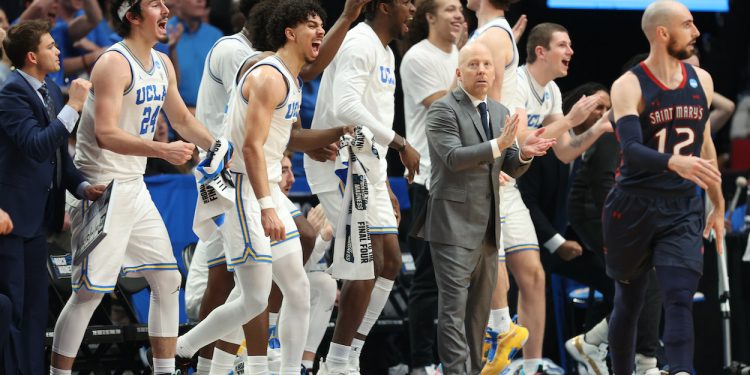 
The 2022 NCAA Men’s Basketball Tournament is well underway, and there’s already been plenty of madness that’s led to some fascinating Sweet 16 matchups. Not only did St. Peter’s become the third 15 seed ever to win two games in the tournament, but four total double-digit seeds moved on past the first weekend of the tournament.

So, as we look at the upcoming Sweet 16 matchups, let’s check out the betting odds for every game and try to find some winners in the bunch.

I’ve been riding Villanova through the first two rounds of the tournament, and the Wildcats have been kind to me with a 2-0 against-the-spread record. I’ll continue to ride this senior-laden squad in the Sweet 16 against an overachieving Michigan group.

In a game that should come down to the wire, I trust Villanova’s NCAA-leading free-throw percentage of 82.6% to make a late push and ultimately cover this five-point spread in the final minutes.

North Carolina got lucky to squeak past Baylor after blowing a 25-points second-half lead in the Round of 32, so I’m happy to fade them against an experienced UCLA team. Star forward Jaime Jaquez is questionable to play with an ankle injury, which is likely why this spread is so short, but I like the idea of getting in early and possibly getting some closing line value.

Even if Jaquez doesn’t play, UCLA has enough veteran leaders to get past a UNC team that can’t stay hot from three forever.

Only two other 15 seeds have made it this far in NCAA Tournament history, and both of them (Florida Gulf Coast in 2013 and Oral Roberts in 2021) lost by 12 in the Sweet 16. I like St. Peter’s to keep this one close enough to cover this massive spread.

KC Ndefo is a tremendous interior defender who can at least offer some resistance to Purdue’s twin towers Zach Edey and Trevion Williams. If the Peacocks can beat Kentucky, they can cover the spread against a much worse defensive squad in Purdue.

As I stated earlier, I love Villanova’s ability to consistently knock down free throws late in games. Combine that with a senior-heavy roster that doesn’t turn the ball over, and you have the perfect formula for a national champion.

Duke is more of a long shot at 16-to-1, but I really like the winner of the West region to make a run to the title game. If the Blue Devils can get by Texas Tech, they’ll likely face a Gonzaga team they already beat earlier in the season. And if you want to go the narrative route, don’t be surprised if the whistle favors Duke in Coach K’s final season on the sidelines.

There aren’t many teams with more raw talent than Duke, and it would only be right for Coach K to leave Durham as a champion.

All betting odds courtesy of DraftKings as of 3/23.

RELATED: NCAA Tournament: Houston Breaks Bracketology and Establishes Itself as a Title Favorite