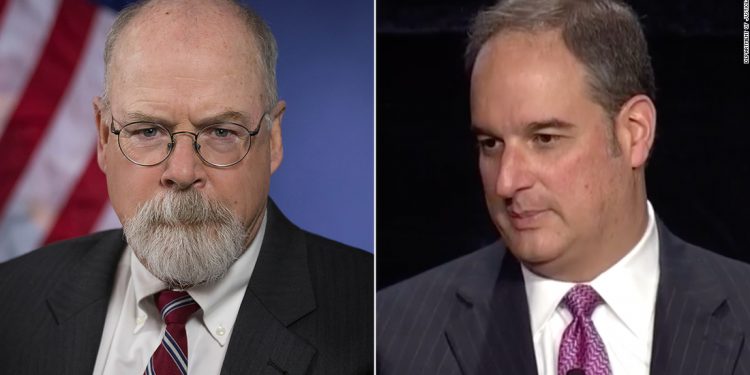 0
SHARES
4
VIEWS
Share on FacebookShare on Twitter
The trial of Michael Sussmann stems from Durham’s three-year inquiry into potential misconduct tied to the FBI’s Trump-Russia probe. It has become a vehicle to revive partisan grievances about the 2016 election and is the first courtroom test of Durham’s controversial investigation.
Former FBI general counsel James Baker, who is easily Durham’s most important witness, told a jury about his September 2016 meeting with Sussmann, the Clinton lawyer charged with lying to the FBI. Prosecutors argued that he concealed his political ties while passing along a tip about Donald Trump’s possible links to Russia. He pleaded not guilty.

Here’s a breakdown of Baker’s exhaustive testimony, which lasted more than seven hours across three days:

Not only did Baker back up a big Durham claim about what Sussmann said at the meeting, but he testified that he is “100% confident” that Sussmann uttered the allegedly false statement.

“Michael started to explain why he was there, and he said that he was not appearing before me on behalf of any particular client,” Baker said Thursday about their meeting, endorsing Durham’s central theory that Sussmann falsely denied that he came to Baker on behalf of any clients.

The “100% confident” line matters because the defense is questioning Baker’s credibility, due to his differing accounts over the years about the fateful meeting, which took place on September 19, 2016.

Baker said Sussmann led him to believe that he “was coming to see me as a good citizen who had obtained some information that he wanted to share with me.” He described Sussmann as “a friend of mine, and a colleague” and told the jury he “trusted that the statement was truthful.”

In opening statements, assistant special counsel Brittain Shaw said Sussmann tried “to use and manipulate the FBI” by allegedly lying to Baker about his political clients, spurring an FBI probe into the Trump-Russia tip, and garnering press coverage “to create an October surprise” that would help Clinton win.

The FBI was “wary of being played” and was “very wary of being sucked into that kind effort,” Baker said, explaining why he would’ve liked to know if Sussmann came on Clinton’s behalf.

Did the alleged lie even matter?

To win a conviction, Durham must convince the jury beyond a reasonable doubt that Sussmann lied to Baker, and that the lie was “material” enough to influence the FBI’s actions or decisions.

If Sussmann told Baker during the meeting that he was representing Clinton, Baker said he “would have asked more questions,” and may have brought in the FBI agents who handled the Clinton email investigation, or the agents who were handling the early Trump-Russia probe.

This testimony might help undo some of the damage from FBI agent Scott Hellmann, who performed the initial technical analysis of Sussmann’s tip, and earlier testified that he wouldn’t have done anything differently about the data if he had known it originated from a partisan source.
Also, one day before the meeting, Sussmann texted Baker that they urgently needed to talk, saying, “I’m coming on my own — not on behalf of a client or company.” Durham didn’t charge this as a false statement, but it could influence jury deliberations. Baker testified that he wouldn’t have scheduled the meeting if Sussmann disclosed that he was representing the campaign.

The defense has argued that the alleged lie didn’t matter — and wasn’t “material” — because Sussmann was well-known within the FBI for representing the Democratic National Committee after it was hacked by Russia. Baker acknowledged in cross-examination that by the time he met Sussmann, he was aware of about Sussmann’s work for the DNC and Clinton campaign.

The verdict may turn on how the jury views Baker’s credibility. Sussmann’s lawyers tried to chip away at that during a cross-examination that highlighted how Baker shifted answers to key questions when testifying to Congress in 2018, to the Justice Department watchdog in 2019, in his interviews with Durham’s prosecutors, and on the witness stand during this trial.

Jurors saw transcripts of Baker’s past testimony, such as when he once said Sussmann told him during their meeting that the tip about Trump came from cyber experts who “were his clients.” (In addition to the Clinton campaign, Sussmann represented tech executive Rodney Joffe, a cybersecurity expert who worked with data scientists to compile the Trump-Alfa data.)

Baker admitted Thursday that his trial testimony was “inconsistent” with that prior testimony.

Defense attorney Sean Berkowitz got Baker to acknowledge that it was the prosecutors who “triggered my memory” of what happened at the 2016 meeting. Baker said Durham’s team refreshed his recollection by showing him notes that an FBI official took of their conversations.

Berkowitz also suggested Baker was testifying to save his own skin, because Baker was the target of a separate leak investigation that Durham led around the time he started examining the Russia probe. With leading questions, Berkowitz raised the idea that Baker changed his story about the Sussmann meeting to become Durham’s start witness and solve his legal problems.

While Baker was Durham’s star witness, he made clear that he was only trying to testify truthfully and wasn’t going out of his way to throw his “friend and colleague” under the bus.

“I’m not out to get Michael,” Baker said Wednesday, shortly after Durham put him on the stand. “This is not my investigation, this is your investigation. You ask me a question, I answer it.”

Baker, a former CNN analyst, directed his sharpest rebukes at the House Republicans who led a congressional inquiry in 2018 into how the FBI handled the Clinton and Trump probes in 2016. Baker and other top FBI officials gave depositions for the GOP inquiry, and he said Thursday it was “upsetting and appalling to see members of Congress behaving the way they were behaving.”

“It was terrible. It sucked at multiple levels,” Baker said.

“It sucked because the allegation was somehow that the FBI had engaged in some kind of improper activity with respect to Mr. Trump,” he added. “My friends and colleagues had been pilloried in public, improperly in my view, and we were accused of being traitors and coup-plotters, and all of this was totally false and wrong.”

He didn’t criticize Durham, but the special counsel has faced many of the same critiques as the House GOP inquiry. Democratic officials and some legal experts have said both endeavors seemed designed to target Trump’s political opponents and to endlessly chase down the former president’s most incendiary “deep state” conspiracies about the FBI and Justice Department.
The GOP inquiry ended when Republicans lost control of the House in January 2019. Within months, then-Attorney General Bill Barr assigned Durham to review the Trump-Russia investigation.
Previous Post