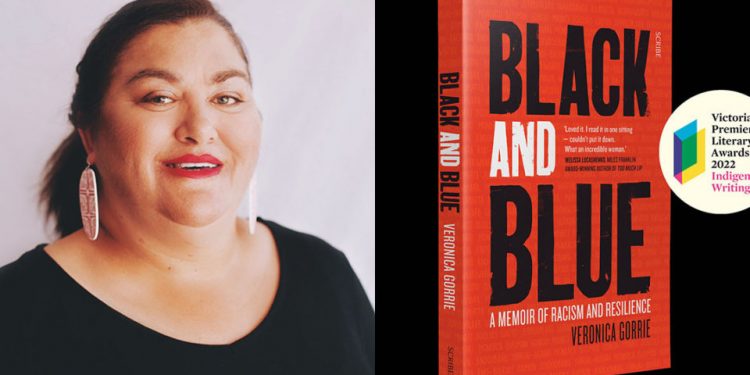 Indigenous writer Veronica Gorrie has won Australia’s richest literary prize with a memoir of her years in the police force.

The Gunai-Kurnai writer has been awarded the overall $100,000 Victorian Prize for Literature for her first book, as well as the prize for Indigenous writing.

Black and Blue: A Memoir of Racism and Resilience explores how Gorrie’s family suffered at the hands of racist law enforcement, followed by stories from her decade serving as one of the few Aboriginal police officers in Australia.

Gorrie shed tears as she accepted the award in Melbourne on Thursday night, and told the crowd she couldn’t believe she’d won.

And now the Victorian Prize for Literature – the single richest literary prize in the country, worth $100,000. A huge congratulations to Veronica Gorrie who has taken out the top prize! With ‘Black and Blue: A Memoir of Racism and Resilience’ @scribepub)! https://t.co/cfT5qZlCNr pic.twitter.com/F4S3PvIr8K

“I’m so grateful that my book has done so well and has raised some talking topics in relation to my people, especially deaths in custody and the way police are killing us,” she told the crowd.

During her speech she asked Victoria’s justice minister to raise the age of criminal responsibility, saying her own children have been locked up.

“It breaks my heart to know that kids as young as 10 are caged up right now and without their family,” she said.

Wheeler Centre chief executive Caro Llewellyn said the awards “can quite literally change the course of the winners’ lives, recognising, and sometimes launching, the careers of some of Australia’s most respected and acclaimed writers”.

An enormous congratulations to all of tonight’s winners and shortlisted writers and publishers. It’s an honour to be able to present these awards every year and contribute to the literary community’s recognition of your incredible work. https://t.co/QBFHIPLCG3 pic.twitter.com/rGLzQ3T6YJ

Melissa Manning won the $25,000 fiction prize for her first book Smokehouse, which tells the story of Tom and Nora, who move to southern Tasmania in an attempt to rescue their relationship.

“It’s not a good fit for Nora, she needs to do what I think a lot of people would like to do but don’t do – exert their autonomy and not settle,” Manning says of her main character.

She also weaves in the tales of other misfit characters set in the tiny communities of Kettering and Bruny Island, where she spent part of her childhood.

Manning told AAP she felt lucky her book was even published and was grateful to be recognised.

“It’s such a wonderful shortlist so I’m a little bit blown away,” she said.

“There are a lot of extraordinary writers out there who are yet to be published and I really hope that something more is done politically to foster the arts.”

Felicity Castagna won the prize for young adult writing with her book Girls in Boys’ Cars, which tells the story of two 17-year-olds from western Sydney who take off for a road trip in country NSW.

The author was especially interested in exploring how a classic road trip story might change when its main characters were women.

The established novelist said after re-drafting the book about 20 times, being recognised with an award “feels amazing”.

“It just feels like a wonderful acknowledgement of all of those hard and lonely hours … books take an incredibly long time to create,” she said.

Victorian Prize for Literature: Black and Blue: A Memoir of Racism and Resilience by Veronica Gorrie

Indigenous Writing: Black and Blue: A Memoir of Racism and Resilience by Veronica Gorrie