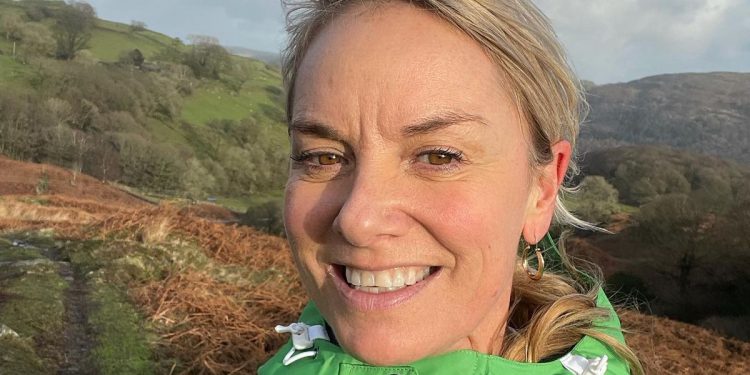 
Tamzin Outhwaite, 51, snuggled up to her boyfriend Tom Child, 31, as they enjoyed a holiday in the great British countryside

Tamzin Outhwaite cosied up to her toyboy boyfriend as the pair enjoyed a family break in the Lake District.

The actress, 51, shared a tweet snap of her and Tom Child, 31, as they enjoyed the great outdoors.

They wrapped up in winter warmers as they enjoyed a hike in the beauty spot after Tamzin said the first few days of January are a “massive let down”.

On Instagram she told fans: “The first few days of January are always a massive let down. This year we decided as a family of 4 who had spent the festive season dispersed but happy, that we should eek out the days off school and work , with an adventure. Kicking off 2022 with a fresh new start.

“Moral of the story… Adventure! Nature! Now is the Time!”

In one snap Tamzin wore a bright green all in one as she posed in front of a stunning mountain backdrop.

Tom and Tamzin have been together four years
(

The family dressed in waterproofs, woolly hats and walking boots as they climbed the steep hills.

Tom was recently rushed to hospital after he was hit with stomach pains.

He was quickly taken into surgery to have his appendix taken out.

Tamzin wrapped up warm as she braved the chilly weather
(

Keeping fans up to date, Tamzin wrote on Twitter : “Good morning all. My bloke went to A and E with bad stomach pains and ended up in theatre having his appendix out.”

“If you fancy a laugh go to his insta @tc_childie .He has never had an op or morphine. He has apparently been cracking up the doctors.”

The couple met four years ago and have both been very open about their relationship and the age gap.

In an interview last year, Tamzin said: “Right now we’re in a really lovely place and I have a very full life. Tom is my partner and my lover. I’m not going to stop him living his life at this age. I’m very aware of that and I’m not being frivolous with my affections. I’m being a realist.

Tom recently had his appendix removed
(

“But if he decides that’s what he wants in the future then he will go off and there’s no one in the world, surely, that would physically be able to stop somebody else wanting to do that — and why would I anyway?”

In a gushing Instagram post Tom marked their anniversary with a post which read: “Four years of having the privilege to call Tamzin my love, my soul, my best mate and my co-adventurer. My Queen!”

“Why would I want him to be with me if he wanted something else? The main thing is that I’m living in the now, which I’ve never really done. I’ve always been like, ”Oh, when I have a kid’; ‘Oh, when I get married’; ”Oh, when I buy that house”.