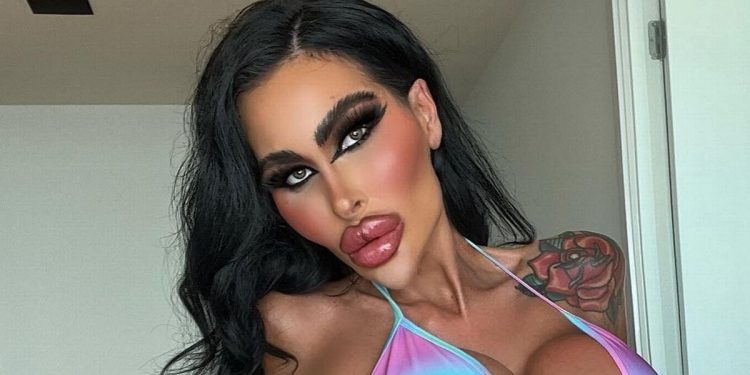 
A plastic surgery obsessive who has had five boob jobs left her fans gobsmacked after posing in a skimpy string swimsuit.

Tara Jayne McConachy, who calls herself a “human Barbie doll” and the “plastic surgery Queen”, shared a series of snaps and a video of herself wearing the tiny bikini on Instagram.

The Australian cosmetics nurse has previously stated that she’s spent a whopping $200,000 AUD (around £110,000) on her appearance over the years.

In one snap, the 33-year-old pouted her filler-enhanced lips at the camera with her long, dark hair loose and wavy.

She sported a glittering belly piercing and a glam makeup look alongside the bright blue and pink swim set.

Tara claimed in a comment that it was her “own bikini design” and the skimpy suit is definitely unusual.

A low bikini bottom is attached to two diamond shaped panels that cover the nipples while the rest of the suit is simply made of strings.

In another, the plastic surgery fan leaned against a counter and pulled the tiny bikini away from her stomach with her hip popped to the side.

In a short clip, Tara lay down on a couch and used the camera to zoom in on her ribs, butt and breasts.

In the caption she said: “Can’t wait to wear my bikinis on vacay…what’s your favourite holiday destination?”

Some of her fans adored the look – and told her so in the comments.

One person commented: “Babe you are The Best Bimbo Girl of the World.

“Those colours really brings out your skin tone.”

While another added: “Love this bikini.

Still more said she looked like an “angel” and some said she was “smoking hot” too.

“You’re my idol,” exclaimed another while another said she looked “beautiful”.

But, others didn’t think the look was for them, as some said they had “no words” for the snap.

Tara has previously appeared on the E! TV show Botched where the doctors refused to operate on her.

She revealed she’d had five breast augmentations, with her current implants being 1050cc, as well as a tip rhinoplasty, buttocks implants, veneers, Botox and fillers.

Her boobs were once even larger, but she sized down due to back pain.