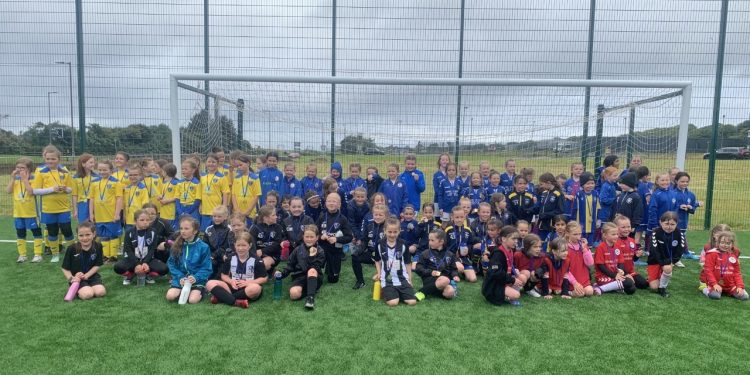 TASS Thistle’s girls recently held a summer festival of football where several of their young sides competed in brutal conditions – with a smile on their faces throughout.

The girls were all awarded medals on the day, with Scotland legend Julie Fleeting also popping along for the occasion.

The tournament saw four different teams taking part in different events, while the their under 12s side also competed in an altogether different festival earlier in the week.

Taking place at Auchenharvie Academy’s new astroturf surface, Thistle’s four and five-a-side teams took part in what was the final SWF festival of the season.

While their under 10s and 12s sides took part in their final SWF South West League fixtures this half of the season, taking on Cambusdoon and Kilbirnie respectively in seven-a-side matches.

Finally, the under 12s side put together a nine-a-side team which competed in an amazing tournament through in Scotland’s capital.

They travelled to Edinburgh a day before the fun in Stevenston, to take part in Hibs Girls Academy Festival.

A club spokesperson said: “It was a brilliant day, and fantastic to see Ayrshire girls coming together to finish the first half of the SWF South West Fixtures together.

“If you would like to join the brilliant TASS Girls teams, with highly qualified coaches, from age four upwards, please contact 07764710582 or email secretary@tassthistlefc.co.uk.”