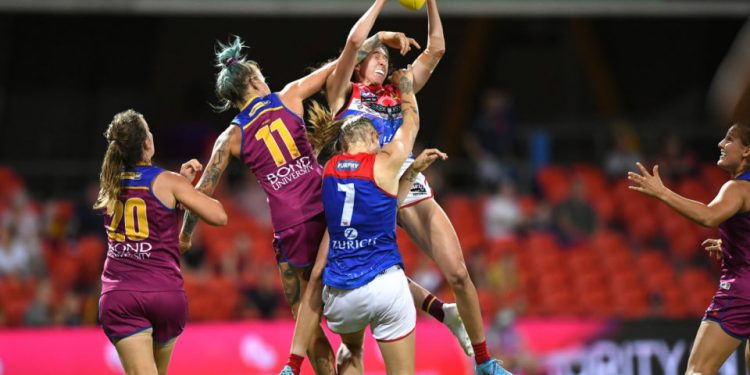 Former Brisbane star Tayla Harris has played a starring role as Melbourne stole a three-point AFLW win over the Lions at Metricon Stadium on Monday night.

Harris kicked two crucial goals and claimed seven contested marks as the Demons rebounded from being down 22-0 late in the second quarter to win 5.5 (35) to 4.8 (32) over the premiers.

Just like last year’s meeting between these teams, Lion Greta Bodey had the chance to win the game with a free kick after the siren.

But as it did in 2021, Bodey’s kick fell short to end the Lions’ five-game winning run.

As well as her two goals and seven contested marks, Harris ended the game with 13 disposals and seven score involvements.

“Tonight we saw her workrate go to another level as well. I don’t think she got much much of a rest because she was so important to us,” Demons coach Mick Stinear said.

“Continually competing in the air, giving us a contest – I think she was marking a lot of them tonight – but then her ability to finish as well and kick the ball inside 50, she’s quite a remarkable player.

“Really pleased. She’s enjoying her footy and enjoying playing with her teammates.”

The 24-year-old was ably supported by Karen Paxman, who claimed 23 disposals, while ex-Geelong star Olivia Purcell (14 disposals) was also impressive on her return from the ACL injury that wrecked her 2021 campaign in her first appearance for the Demons.

Demons veteran Daisy Pearce (15 disposals) also played a vital role when she switched from the forward to add an extra body in the defensive 50 to stem the Lions’ tide.

The move came after the Lions, coming off a 69-point demolition of Gold Coast last Thursday, made a perfect start when Orla O’Dwyer marked her 25th AFLW appearance with the opening goal.

Melbourne, meanwhile, was held scoreless in the opening term and lucky to only be down by nine points at the first break.

Goals to Sophie Conway and Bodey at the start of the second quarter gave Brisbane the lead its dominance deserved as the Demons found themselves being swamped by the premiers’ aggressive press around the footy.

With a scoreless half looming, the Demons’ got some momentum heading into the main break with their first points when Bannan kicked her first goal with just over a minute to play.

That proved match-turning as the Demons went on a charge in the third term, kicking three goals to one to transform a 17-point deficit at halftime into just a one-point margin at the final turn.

Harris’s second goal, after claiming her sixth contested mark in front of goal, put the Demons in front for the first time in the match early in the fourth term.

It was a lead the visitors didn’t relinquish with Bodey’s shot after the siren falling agonisingly short to end a run of three games in nine days on a low note for the Lions.

“Opposition had a nine-day break. We had four,” Lions coach Craig Starcevich said.

“But we played well enough.

“We left a bit out there in the first half. We probably should have come in 5.3 instead of 3.5 … it was a bit galling that we gave it up.”

Melbourne’s next game is a mouthwatering match-up against third-placed North Melbourne on Saturday while Brisbane faces West Coast on Sunday.

British Airways to pay 20,000 pilots and crew a goodwill bonus

British Airways to pay 20,000 pilots and crew a goodwill bonus