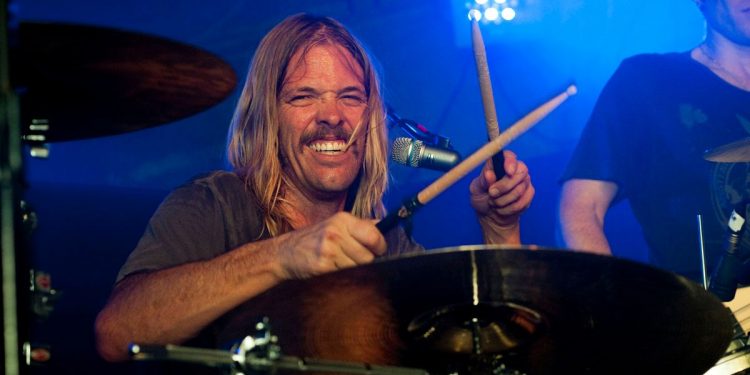 Foo Fighters drummer Taylor Hawkins has died at the age of 50, his heartbroken band members announced.

A statement on the band’s official Twitter page read: “The Foo Fighters family is devastated by the tragic and untimely loss of our beloved Taylor Hawkins.

“His musical spirit and infectious laughter will live on with all of us forever.

“Our hearts go out to his wife, children and family, and we ask that their privacy be treated with the utmost respect in this unimaginably difficult time.”

Local news reports say Taylor was found dead in a hotel room in Bogota, Colombia, where the band had been due to play at a festival.

They announced that they won’t be performing at Festival Estéreo Picnic in the capital following the tragedy.

Devastated fans were in shock after reading the band’s statement.

One begged: “No. No I don’t understand. Is this some kind of sick joke? Has someone hacked their account?”

But another told them: “It’s no joke, he was found dead today in Bogotá, they were going to play today in a music festival named Estereo Picnic.”

Paying tribute, another wrote: “An incredible musician that will be missed. Loved his spirit and smile.”

And another commented: “No. What? I can’t believe this. What? I’m am so grateful I got to see Taylor perform live. I just attended a foo fighters tribute act tonight aswell. RIP Taylor”.

Born Oliver Taylor Hawkins in Fort Worth, Texas, he had a lifelong passion for music that saw him work as a touring drummer for the likes of Alanis Morissette and Sass Jordan before joining Foo Fighters in 1997.

His career went from strength to strength and he was named Best Rock Drummer in 2005 by magazine Rhythm.

Taylor had joined the band – fronted by Dave Grohl – after the singer fell out with drummer William Goldsmith and he quit the group.

Grohl, who was the drummer in Nirvana previously, re-recorded an album they made with Goldsmith, playing the drum parts himself before reaching out to acquaintance Taylor to ask for recommendations for a new drummer.

He’d been under the impression that Taylor wouldn’t want to leave Morissette’s touring band, given that she was much bigger in the music industry than the Foo Fighters at the time.

But to the singer’s surprise, Taylor volunteered to join the band himself, saying he really wanted to be the drummer in a rock band.

Taylor also provided vocals, guitar and piano for the band on various recordings.

In 2006, Taylor went on to release a self-titled LP with his side project, Taylor Hawkins and the Coattail Riders, and he also occasionally played with a Police cover band called The Cops.

Taylor married wife Alison in 2005 and they welcomed three children together – Oliver, Annabelle and Everleigh.

Like many musicians, Taylor had become a drug user during his career, and he once opened up about overdosing on heroin in 2001.

He said on Beats 1 in 2018: “I was partying a lot. I wasn’t a junkie per se, but I was partying. There was a year where the partying just got a little too heavy.

“Thank God on some level this guy gave me the wrong line with the wrong thing one night and I woke up going, ‘What the f**k happened?’ That was a real changing point for me.”

He made a huge impact on the music industry and will be sorely missed by his fans and fellow artists.

During his career, he released nine albums with Foo Fighters, three with Taylor Hawkins and the Coattail Riders and one with another side project, The Birds of Satan.

One heartbroken fan said of Taylor: “50 years of a great life and of making us laugh and cry and feel all the emotions with the beat of his drums. He’ll be missed. May he rest in peace!”

While another wrote: “The audio book of Dave’s memoir have been my companion lately on long drives. And his love for Taylor resonated through his words. What an awful loss. I am so sorry.”

And one tweeted: “I am heartbroken for Taylor, his family and the whole band family. Dave Grohl – you and Taylor Hawkins are the only ‘celebrities’ that I feel this way about. My heart goes out to all of you.”

Why so much talk about the 14th Amendment?