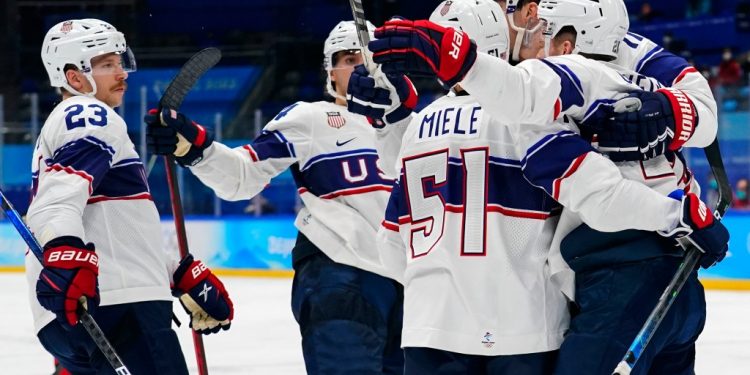 The hockey stars are gone from the Olympics, but the American kids look ready to take advantage.

The youngest team in the tournament went toe to toe, skate to skate with its chief rival and held off Canada, 4-2, in an important group-play face-off Saturday in Beijing.

When it looked as if Team USA was in trouble, following a hectic end to the second period, it was Kenny Agostino, from Morristown, N.J., whose one-timer trickled through Canadian goalie Eddie Pasquale and allowed the Americans to breathe in the third.

Former Rangers coach David Quinn’s Team USA (2-0) has positioned itself well with one preliminary game remaining and looks poised to be a top seed entering the elimination round.

“We feel really good about that effort,” forward Brian O’Neill, who assisted on Miele’s score, said on the NBC telecast. “Obviously had a good first game, but to build on that, gain some confidence — hopefully that gives us some momentum going into the third game.”

If the nerves got to the Americans, who feature five teenagers and are composed mostly of college players, it showed early. A turnover in the neutral zone led to a throw-in from Canada’s Mat Robinson squeaking through 1:24 into play.

But the Red, White and Blue answered back just over a minute later, the first of three straight goals. Canada (1-1) sliced the gap to 3-2 in the second period and had an opportunity for former Islander Josh Ho-Sang, who faced an open net — but couldn’t hit the puck cleanly.

The Canadians had their chances, including back-to-back power plays and a brief 5-on-3 in the third period, but American goalie Strauss Mann (35 saves) was too much.

The Americans cruised in the Olympics opener with an 8-0 victory over China, and Canada began group play with a 5-1 win over Germany. Team USA will finish up its preliminary-round play against Germany on Sunday and should be well-positioned entering the elimination round in these weird Games.

The NHL, at the last minute, opted against letting its players enter the Olympics amid coronavirus concerns.

The NHL also disallowed its players from competing in the 2018 Olympics, which opened the door for the Russian national team — with its professional leagues accommodating an Olympic break — to win gold.

American men have not won a Games since the storied victory at Lake Placid in 1980. They last medaled (a silver) in Vancouver in 2010 — which also had been their most recent victory over Canada in the Olympics.

U.S. and allies tell citizens to leave Ukraine as Russia could invade at any time – Reuters