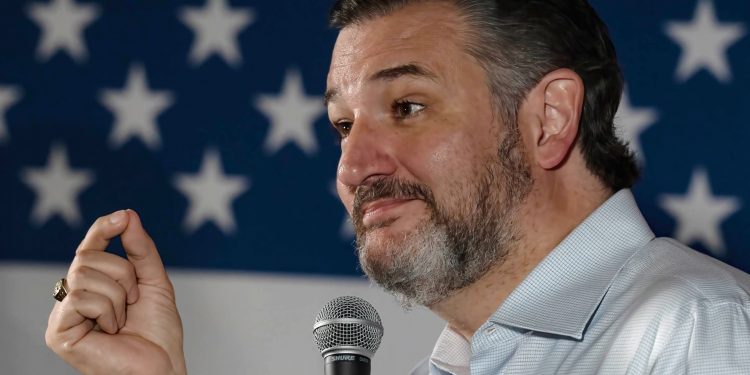 Texas Senator Ted Cruz campaigns with Pennylvania Senate hopeful Dave McCormick, here he pretends to hold a peanut while making a joke about wearing masks to protect against Covid-19.

The Supreme Court on Monday ruled in favor of Sen. Ted Cruz, R-Texas, in his challenge of a campaign finance law limiting the use of post-election funds to reimburse candidates who lend large sums to their own campaigns.

The decision split the conservative-majority court along ideological lines, with liberal justices arguing in dissent.

“The theory of the legislation is easy to grasp. Political contributions that will line a candidate’s own pockets, given after his election to office, pose a special danger of corruption,” read the dissent from Justice Elena Kagan.

Without the rule, “The politician is happy; the donors are happy. The only loser is the public. It inevitably suffers from government corruption,” wrote Kagan, who was joined by Justices Stephen Breyer and Sonia Sotomayor.

The regulation, from a section of the Bipartisan Campaign Reform Act, barred campaigns from using more than $250,000 in post-election funds to repay a candidate’s loans to fund those campaigns. Any amount above that can only be repaid with pre-election funds within a 20-day window after the election.

Cruz had loaned $260,000 to his successful 2018 campaign against Democratic challenger Beto O’Rourke. Twenty days after that election, $10,000 of Cruz’s personal loan remained unpaid.

The senator, who had purposefully gone above the quarter-million-dollar limit to prompt a legal challenge against the regulation, argued that the 20-year-old rule violated his free speech rights. A federal district court sided with Cruz, ruling that the law discourages “the personal financing of campaign speech.”

The Supreme Court affirmed that ruling. Chief Justice John Roberts wrote for the majority that the law raises the risk that some candidates may not recoup their loans after an election. That “in turn may deter some candidates from loaning money to their campaigns when they otherwise would, reducing the amount of political speech,” Roberts wrote.

“By inhibiting a candidate from using this critical source of campaign funding, [the regulation] raises a barrier to entry — thus abridging political speech,” Roberts wrote.

He also wrote that there is “pretty meager” evidence available to support the argument that the regulation is necessary to prevent possible political corruption.

In her dissent, Kagan wrote that the majority’s decision to strike down the regulation is “hard to fathom.”

The limits on repaying large campaign loans with post-election donations are intended to target “both corruption and the appearance of corruption of the quid pro quo kind,” Kagan wrote, because the donations in question “personally enrich those already elected to office.”

“In allowing those payments to go forward unrestrained, today’s decision can only bring this country’s political system into further disrepute,” Kagan wrote.