Tesco’s annual results set to be dominated by two themes: Profits and expectations for inflation

Tesco’s annual results on Wednesday are set to be dominated by two themes.

The UK’s biggest supermarket is expected to see profits soar for the year to February as it continued benefiting from pandemic trends. And all eyes will be on Tesco’s expectations for inflation and how it is supporting shoppers through the cost of living crisis.

Last year the supermarket’s profits plummeted by a fifth to £1.7billion after it paid back £585m in business rates relief. 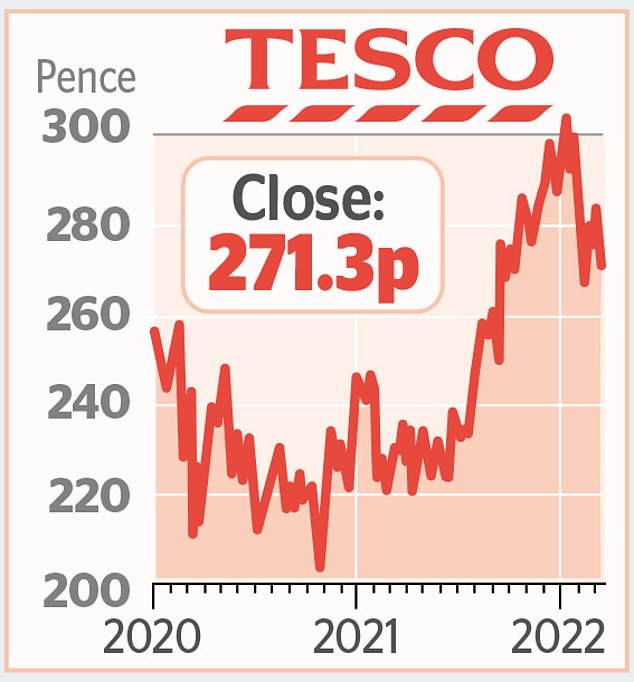 Analysts expect this number to soar and chief executive Ken Murphy said in January its retail profits would be at the top end of a £2.5billion to £2.6billion range. Taking Tesco Bank into account, analysts expect £2.8billion in overall profits across the group.

Tesco has been hoovering up market share from rivals such as Morrisons and Asda as it uses its huge scale to keep prices down for customers.

Murphy has promised an ‘unwavering commitment to value’ as his firm grapples with soaring costs. He said in January Tesco’s input costs were climbing at around 5 per cent annually, up from between 2 per cent and 3 per cent usually.

But since Russia’s invasion of Ukraine inflation has soared and analysts will be looking for the latest estimate of Tesco’s inflation.

AJ Bell analyst Danni Hewson said: ‘At a time when inflation is a key concern, and customers will start to trade down, this could be a useful part of Tesco’s armoury when it comes to driving profits and cash flow and protecting profit margins.’