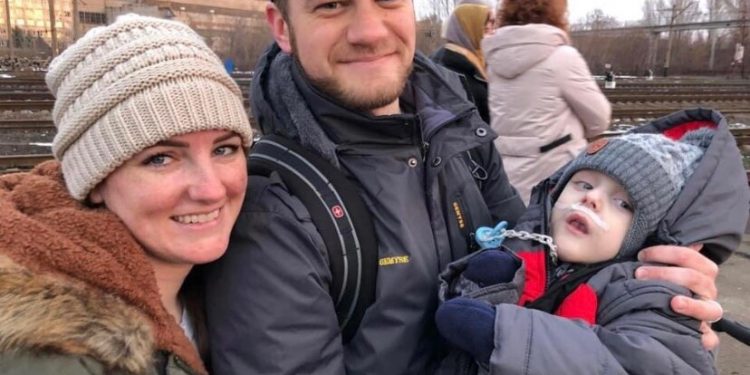 The embassy processed the visa, Jagge said. The rest was supposed to be smooth sailing.

The San Antonio couple had arrived in Ukraine about two weeks earlier to adopt 4-year-old Ruslan from an orphanage in Donetsk — an eastern region claimed and partly controlled by Russian-backed separatists. The close call at the embassy marked the start of the Jagges’ frantic attempt to leave Ukraine ahead of a possible Russian invasion.

Early on Feb. 12, Theron, Kelci and their newest family member were ready to hop on a 6 a.m. flight and begin their journey back to the United States.

But when they got to the airport, Jagge said, border guards would not let them pass. Instead, the family was taken into an office and told that Ruslan could not leave Ukraine. The boy would have to wait another 30 days, according to adoption requirements.

By that time, some 130,000 Russian troops had amassed outside the country’s borders as U.S. officials warned of an imminent invasion, The Post reported. Only hours before the Jagges had arrived at the airport with their son, White House national security adviser Jake Sullivan told all Americans in Ukraine to “leave as soon as possible.”

“If you stay, you are assuming risk with no guarantee that there will be any other opportunity to leave, and no prospect of a U.S. military evacuation in the event of a Russian invasion,” Sullivan said.

But the family was not only facing the threat of war. Ruslan has cerebral palsy, and his health “was deteriorating,” Jagge said. The boy was running a fever and had pneumonia. He was also suffering severe withdrawal symptoms from medications he’d been given at the orphanage, Jagge said.

“We had gotten to the point where it was a real concern that we would run out of medicine for him,” he told The Post. There was “a lot piling up against us.”

During the five hours the family was kept in an office at the airport, Jagge said, arguments ensued. Border guards told the couple their child would need to remain in Ukraine for another month, Jagge recalled. Theron and Kelci Jagge argued that the requirement had been waived because of Ruslan’s medical condition and that border agents were reading the documents wrong, Jagge said.

But the guards repeatedly told the couple, “Our decision is final,” Jagge said.

After seven hours in the airport, and having missed their flight, the family went back to an apartment in the city. That’s when they realized the crisis was intensifying, Jagge said. Residents were being advised to stock up on water and supplies in the event of power outages, he recalled. Meanwhile, the Jagges met with a lawyer who said she could argue their case to the guards, but the attorney warned they only had about a 50 percent chance of success.

In what Jagge referred to as a miracle, it worked. On Feb. 14, the lawyer was able to get Ruslan cleared to leave the country, Jagge said. While flights out of Ukraine were getting harder to find, the Jagges managed to book one to Istanbul. From there, the family flew to the United States and rushed the boy to the hospital.

Ruslan, meanwhile, remains in an intensive care unit, Jagge said, and “he’s doing a lot better now.” Once released, the boy will join the Jagges and their two other children — an 11-year-old daughter and 3-year-old son — just outside San Antonio. But Theron Jagge continues to think of the 80-odd children at the orphanage from which he and his wife had adopted Ruslan. Kramatorsk, the city in Eastern Ukraine where the orphanage is located, has experienced multiple explosions, according to BuzzFeed and the New York Times.

“For me to say that was something other than a miracle, I would just be kidding myself,” Jagge added. “We should still be there in a lot of ways. There’s no reason why we realistically should have gotten out of there — but we did.”

The corporate fallout from Russia’s invasion of Ukraine