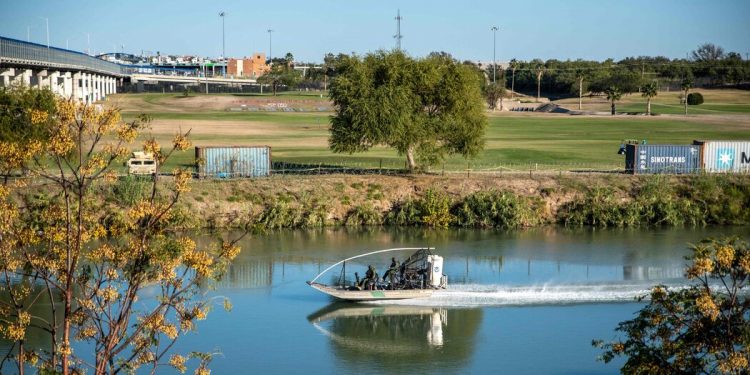 HOUSTON — A member of the Texas National Guard was missing and believed drowned in the Rio Grande on Friday while stationed along the river, as part of a mission ordered by Gov. Greg Abbott to help prevent illegal border crossings, according to two officials briefed on the matter.

The Texas Military Department, in a brief statement, said the Guard member “has gone missing along the river during a mission related incident” as part of his assignment with the border mission, known as Operation Lone Star. “The soldier has not been found,” the department said, adding that an active search was underway.

By the afternoon, helicopters, boats and divers were searching in and around the section of the river where he was last seen, an area known for frequent migrant crossings and dangerous conditions.

The guardsman, who was not immediately named, had been attempting to rescue a migrant woman as she struggled in the water, according to one of the officials, Sheriff Tom Schmerber of Maverick County, which includes the city of Eagle Pass, where the incident occurred.

The woman had been crossing as part of a relatively small group of migrants on Friday morning, the sheriff said. The guardsman, believed to be in his early 20s, went in to assist her, and appeared to have been pulled away by the current at about 8:30 a.m., the sheriff said. The woman survived and made it across the river to the United States, he said.

The sheriff said the county had recently seen about two drownings of migrants a week. But the drowning of any law enforcement officer during border operations is considerably more rare. “When I was in the Border Patrol, we advised never to jump after anybody,” he said.

Jon Anfinsen, the president of the Border Patrol union chapter in the Del Rio sector, said that when the guardsman saw the woman struggling in the water, he removed his body armor, threw away his rifle and jumped in. “You figure there’s so much struggling right there in the water, I think most of us would try to do something,” he said.

An initial incident report prepared by the Guard and obtained by The New York Times said that the soldier “had not resurfaced” as of shortly before 10 a.m., and that his team had “lost visibility.”

Mr. Anfinsen said the location where the woman got in trouble — less than a mile north of the official port of entry — can be deceptive, with fast-moving currents lurking below placid surface waters.

“We have people crossing every day, every hour,” he said. “They’re swimming across right there and the river, it’s rough. It’s very deceiving how fast it is.”

Border Patrol agents have retrieved 11 bodies from that sector of the river since the beginning of the month, including one recovered on Friday, he said. “We are rescuing people in the river all of the time.”

On Monday, Mr. Abbott issued a brief statement, saying his office “continues to work with the Texas National Guard and other law enforcement agencies as they search for the missing soldier.”

The apparent drowning comes at a time of pitched political debate over how to handle a surge of migrants at the southern border and whether to end a Trump-era public health rule that has allowed federal agents to quickly turn back many migrants who arrived at the border during the coronavirus pandemic.

That rule, known as Title 42, is expected to expire in late May, though President Biden is under pressure from Republicans and some Democrats to extend it. Federal officials have been preparing for an influx of as many as 18,000 migrants a day after Title 42 ends.

On Friday, the attorney general of Texas, Ken Paxton, sued the Biden administration over its decision to end the Title 42 process, which has allowed hundreds of thousands of migrants, including those seeking asylum, to be immediately sent back over the border with Mexico.

Mr. Paxton’s suit is seeking an emergency order to keep the policy in place.

Mr. Abbott has said that the Biden administration has done little to secure the border from illegal crossings, which surged last year, and he has sharply increased the number of state law enforcement agents at the border with Mexico.

Last year, Mr. Abbott, a two-term Republican who is up for re-election in the fall, ordered thousands of Texas National Guard troops to patrol the border, a mission that was expected to cost more than $2 billion a year.

But the Guard members cannot arrest migrants for federal immigration offenses, and mostly act as lookouts and support for the Border Patrol, directing migrants to federal agents when they encounter them. Some Guard members described the state’s deployment as hastily arranged, disorganized and politically motivated.

At the same time, the number of migrants who died or were reported missing while attempting to cross into the United States sharply increased last year, with more than 600 deaths recorded by the International Organization for Migration.

Tiffany Burrow, director of the Val Verde Border Humanitarian Coalition, said that though many migrants had perished in the often-dangerous river currents, the apparent drowning of the guardsman on Friday demonstrated the dangers to law enforcement agents.

“Border Patrol and the guards put their lives on the line in moments like that,” Ms. Burrow said.

A group of Republican members of Congress, including Representative Kevin McCarthy, the minority leader in the House, and Representative Tony Gonzales, who represents the area, was expected to visit Eagle Pass on Monday and planned to meet with federal immigration officials and members of state law enforcement, including the National Guard.

On Friday, Mr. Gonzales posted a photo of a protective vest lying on the ground, saying that the “brave National Guardsman removed his armor before jumping into dangerous waters to save a human life.”

The mayor of Eagle Pass, Rolando Salinas Jr., said the area where the guardsman went into the water was a common place for migrants to cross the river, but also one of the most dangerous in the area.

As of the early afternoon, he said, a Border Patrol dive team was still in the water searching for the body of the guardsman, who he said was about 22 years old.

The mayor said that when the year began, the area of the border that includes both Eagle Pass and the city of Del Rio had seen a few hundred people crossing a day. But in the past month, Mr. Salinas said, that number had increased to at least 1,000 a day.

“It’s getting hectic here,” Mr. Salinas said. “With the cancellation of Title 42, we’re afraid that this will be even double or triple.”

The missing guardsman, he added, was “trying to do a good deed.”

But some members of the Texas National Guard said they had not been properly trained in how to handle the swift currents of the Rio Grande.

After the guardsman was swept away, senior leaders spread word to members not to attempt similar rescues of migrants. Units along the water ordinarily have “throw ropes” and use them to assist those in trouble in the water, rather than enter the water themselves, especially if they do not have a life vest, said one member of the guard assigned to Operation Lone Star. It was not clear if the guardsman who went into the water had one.

Soldiers were told on Monday that they would soon receive more training in water operations, the member said, speaking on the condition of anonymity to describe the internal messages. The level of the river appeared to be high, the member added, making it potentially more dangerous.