This is landscape photography at its most unfiltered.

These breathtaking pictures are prizewinners in the 2022 Natural Landscape Photography Awards (NLPA), an annual contest that honours photographers who ‘value realism and authenticity in their work’.

The contest has strict rules in place to ‘avoid the types of deceptive digital editing techniques that have become commonplace in landscape photography’. Simple post-processing techniques are permitted, but extreme photoshopping tricks – such as introducing or removing elements like trees or birds – aren’t allowed. The result? Incredible landscape photography that guarantees the viewer won’t feel ‘deceived’ if they see the subject of the photo in real life.

This year, the second year of the contest, 10,700 photographs were submitted from 55 countries around the world, with Wisconsin-based photographer Brent Clark reigning supreme overall and taking the title of Photographer of the Year.

Commenting on the contest, Clark said: ‘Last year’s NLPA was the first photography competition I had ever entered because most competitions seem to reward a style of image I prefer not to create and a mindset I do not have. What caught my attention with the NLPA was its esteemed judges and core values, rather than the prizes and recognition that come with winning. I felt like entering was to cast a vote for what I wanted to see more of in the landscape photography community – natural and inspirational imagery, grounded in reality.’

The judges add that this year’s winning pictures ‘are a fantastic showcase of not only the photographers involved, but also the true wonder of the landscape in a way that people can trust’. Scroll down to see MailOnline Travel’s pick of the winners, kicking off with a magnificent photograph from Clark’s winning portfolio. 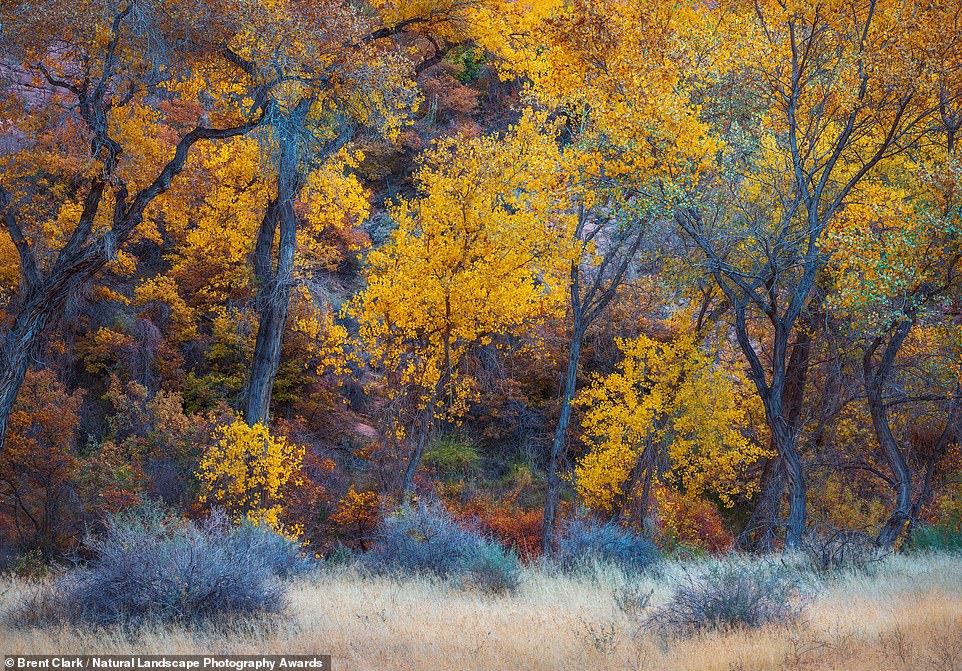 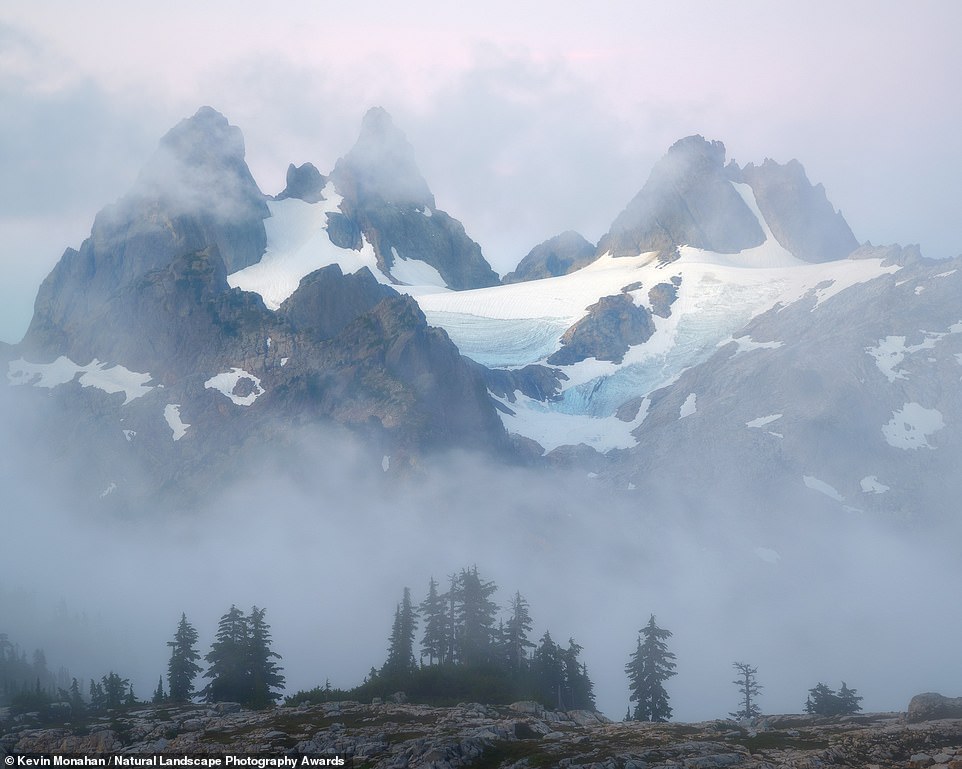 First place in the Grand Scenic category goes to this spellbinding photograph by American Kevin Monahan of a peak in the Alpine Lakes Wilderness Area in Washington. Monahan, who snared the shot on a backpacking trip, admits that he originally set out to capture a photograph of the area’s mountains reflected in a lake. ‘After hiking 11 miles (17km) and climbing close to 5,000ft (1,524m), I reached the top and realised the chances of capturing that were slim. We were engulfed in fog, couldn’t see anything around us, and there was too much wind,’ he recalls. During the sunrise the following morning, the clouds finally began to part, revealing the mountains behind them. ‘The conditions were magical but quickly fleeting… I couldn’t have been happier photographing this scene out in the backcountry,’ he says 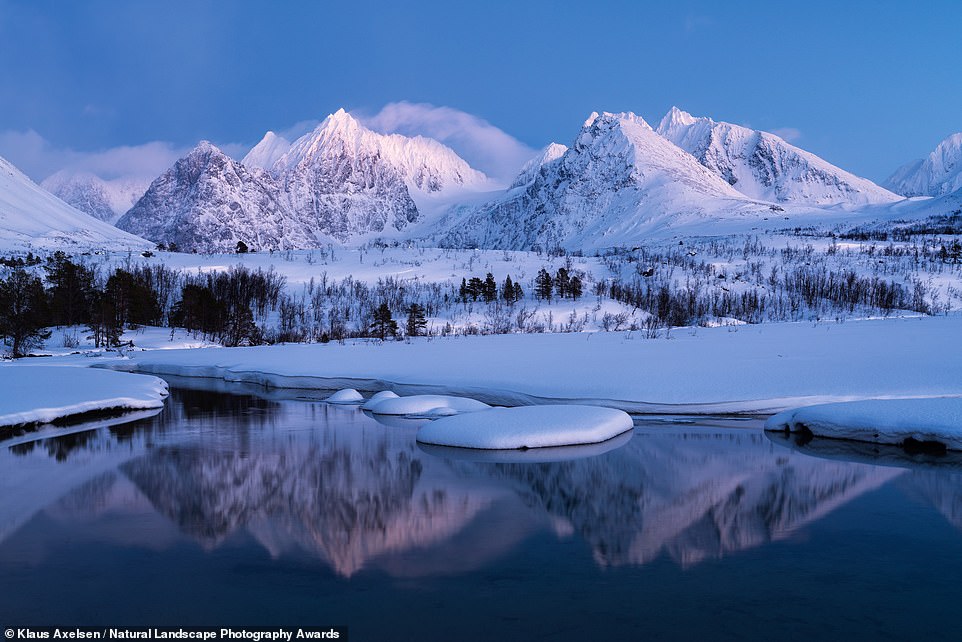 Klaus Axelsen lands the bronze medal in the Rivers, Lakes and Waterfalls category thanks to this stunning photograph of a snowy scene in the Lyngen Alps of Troms in northern Norway 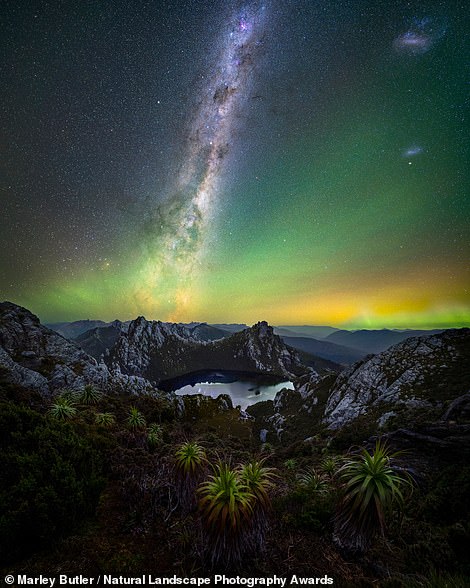 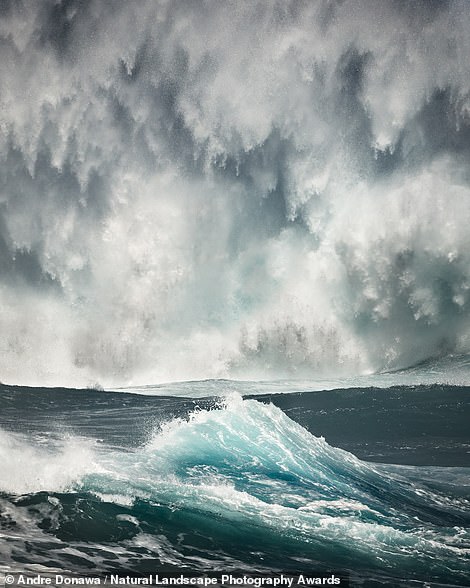 LEFT: Winning over the judges, this shot of Lake Oberon in Tasmania under a starry sky scoops the gold medal in the Nightscape category. Australian photographer Marley Butler recalls that it was ‘an uncharacteristically clear and still night for a region known for some of the most inclement weather in Australia’. Detailing the stars seen in the sky, Butler says: ‘Above the peaks, the galactic core rises and the violet light emissions from the Carina Nebula can be seen at its peak. The night sky is swathed in airglow – a natural phenomenon where atmospheric oxygen atoms release green light. The small and large Magellanic Clouds feature in the top right of the frame and below on the horizon the Aurora Australis dances.’ He says he was ‘shivering in enough insulation to make the Michelin man jealous’ when he took the picture. RIGHT: This astonishing photograph, which tops the podium in the Seascapes category, is the work of photographer Andre Donawa. Titled ‘The Great Wave’, it was captured in Barbados and shows a stormy sea rise and descend ‘in a gargantuan waterfall of water and foam’ 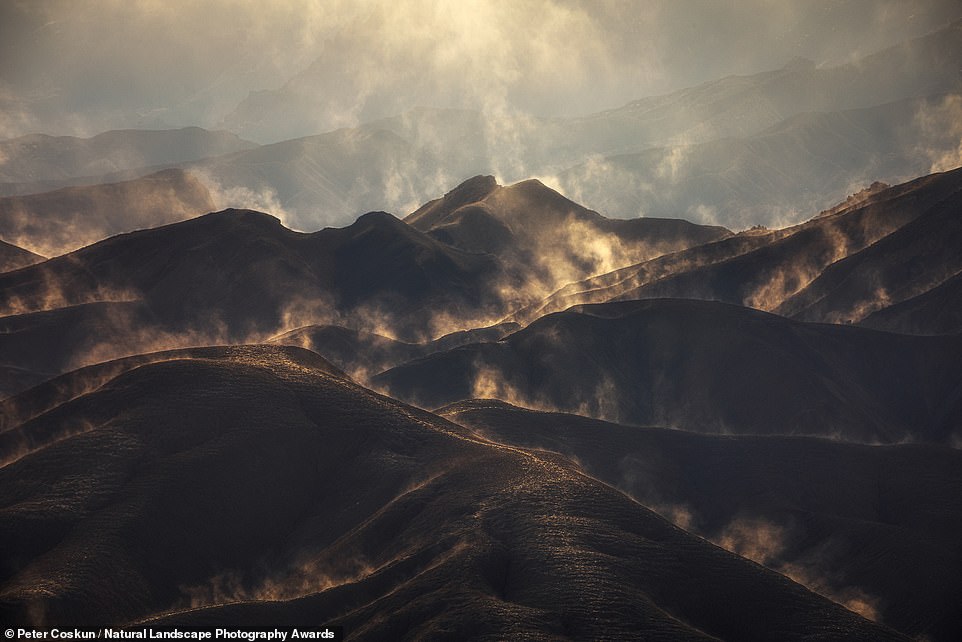 This atmospheric picture shows steam rising from layers of badlands [a type of arid terrain] after a day of ‘non-stop’ rainfall followed by bright sunshine in Death Valley National Park, which straddles both California and Nevada. It’s the work of U.S photographer Peter Coskun, whose portfolio of photography ranks fifth overall in the Photographer of the Year category, with this particular photograph also singled out as the top prizewinner in the Desert category 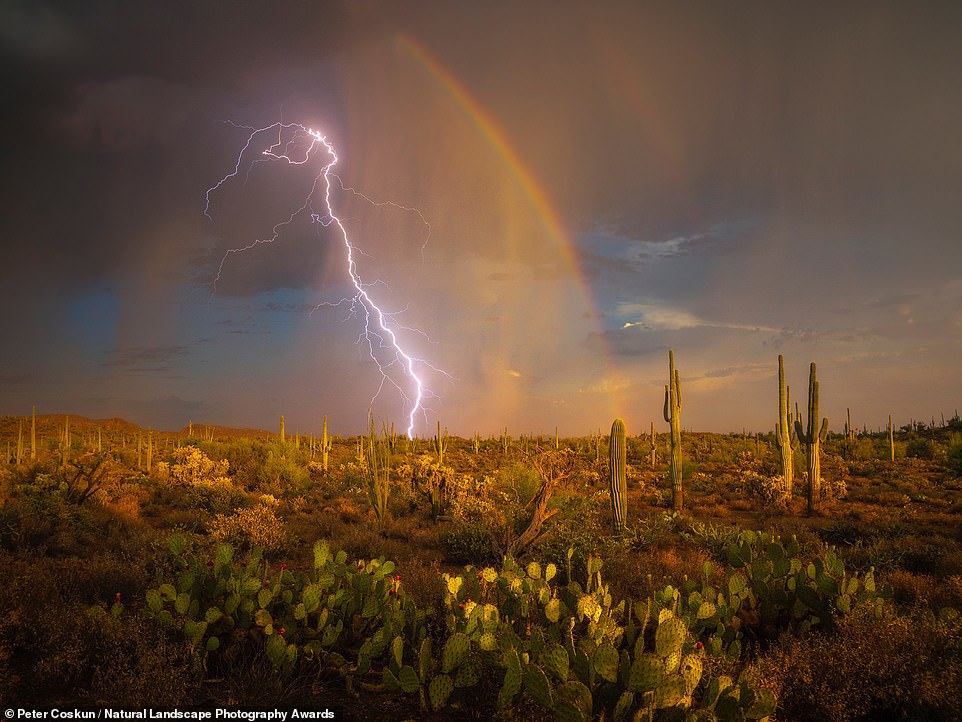 Above is another breathtaking shot from Coskun’s portfolio, this time showing a lightning bolt and a rainbow illuminating the sky above ‘stunning varieties of desert vegetation’ near the Superstition Mountains in Arizona. Moments after he took this shot, another bolt of lightning struck ‘way too close’ to where Coskun’s camera was set up, leading him to duck to avoid it, he reveals 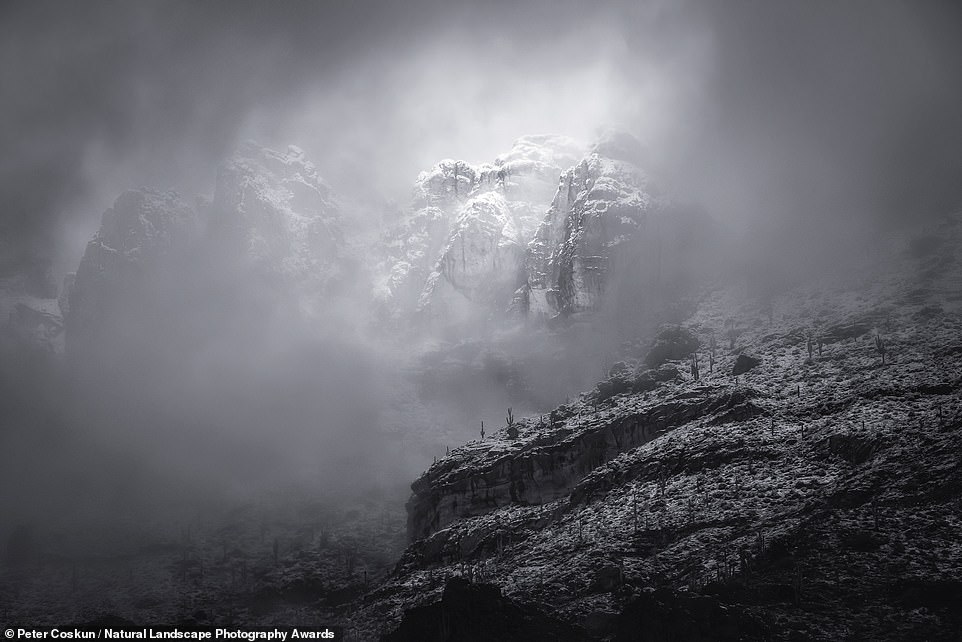 Snowcapped peaks rise through the clouds in Arizona’s Superstition Mountains in this third epic shot from Coskun’s portfolio. ‘There was something special about the way the mountains were being unveiled by the clouds,’ he recalls, adding that the saguaro cacti in the foreground ‘look so small with the mountain being so commanding’ 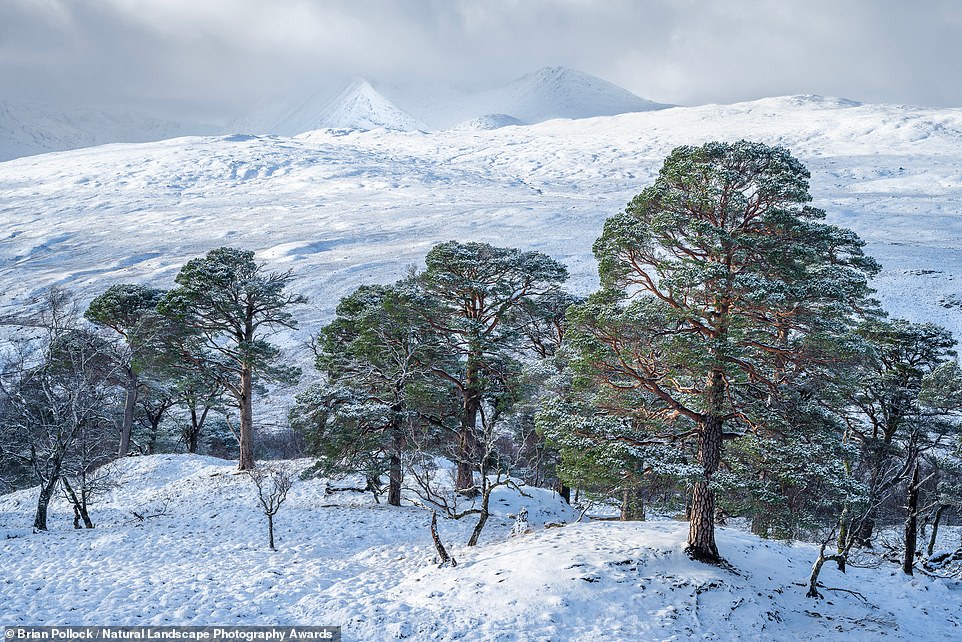 Behold, the winner of the Frozen Worlds category. Photographer Brian Pollock says that the photograph shows the ‘last gasp of a short-lived winter’ in the Scottish Highlands, with coniferous Scots Pine trees in the foreground. Soon after Pollock took the shot, the snow melted and the Highlands enjoyed an unexpected early heatwave, he reveals 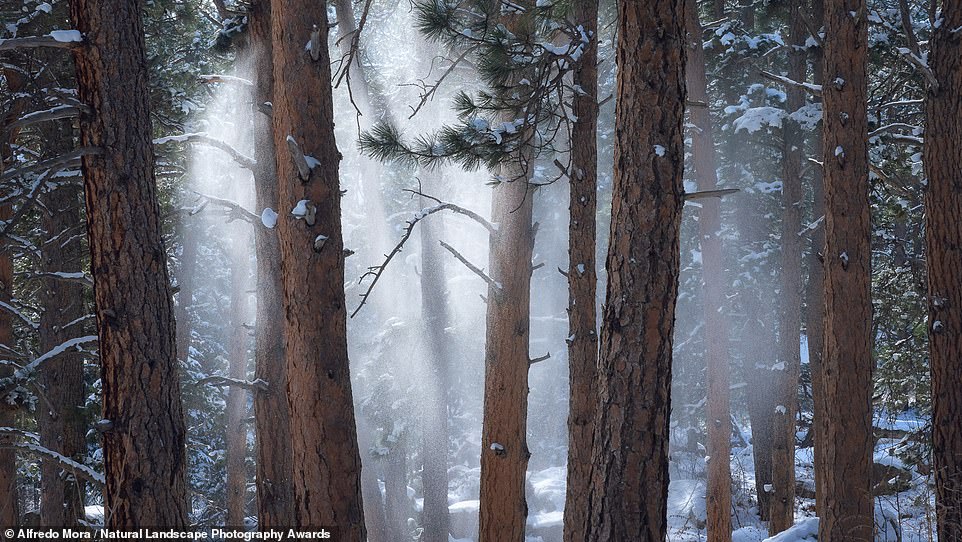 Alfredo Mora is the photographer behind this striking shot, captured on a ’beautiful winter day’ near the Flatirons rock formations in Boulder, Colorado. Mora – whose portfolio ranks third in the Photographer of the Year category – was hiking in the area when he ‘heard thumping sounds nearby and then saw an “avalanche” of snow crashing down the pine trees’. He recalls the falling snow interrupting ‘the wonderful quietness of the forest’. The photographer says: ‘I love how the drifting snow softens the background almost like fog. Seeing the powdery snow falling in the forest made me smile. My imagination spins and I think that just maybe, the trees have snowball fights when we are not looking’ 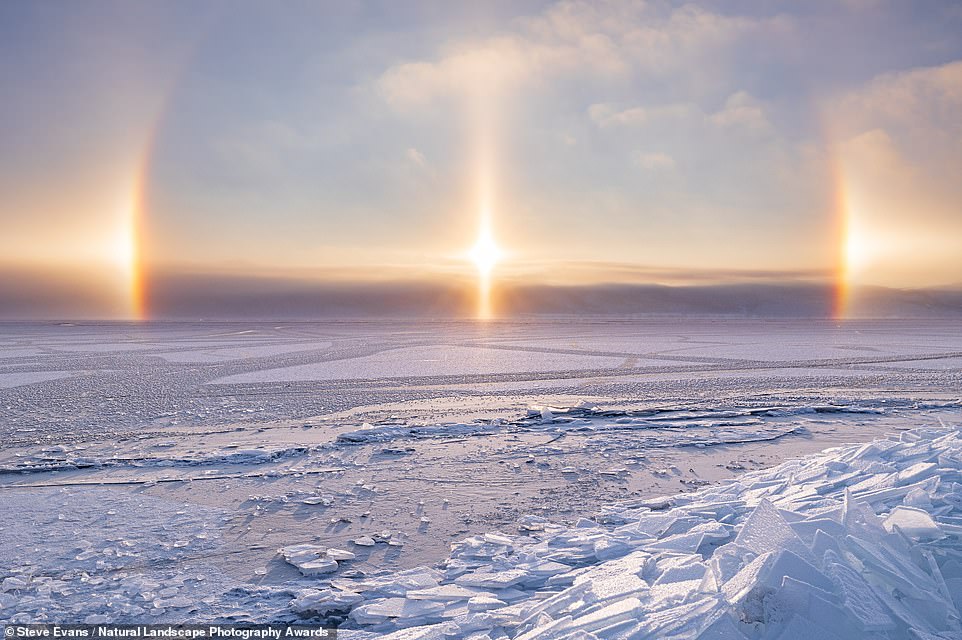 Snapping up the bronze medal in the Frozen Worlds category, this picture by Steve Evans – taken in an unnamed location – shows the sun on the horizon flanked by ‘sun dogs’, an optical phenomenon caused when ice crystals in the atmosphere bend sunlight 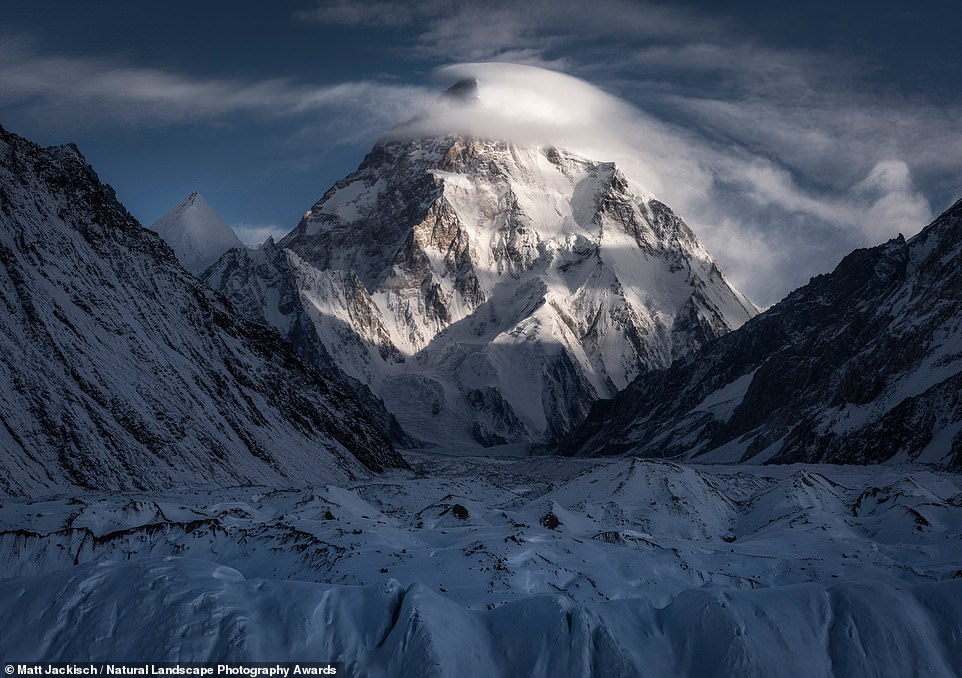 Matt Jackisch was standing on the Baltoro Glacier in Northern Pakistan when he captured this evocative photograph of K2, the 28,251ft- (8,611m) high mountain in the centre of the shot. The U.S photographer recalls: ‘Full winter had set in and everything was white and blue. It was minus 20 degrees Celsius. Cold, windless, lifeless. The mountain seemed to roar in silence.’ Impressing the judges, his photograph is number one in the Mountains category 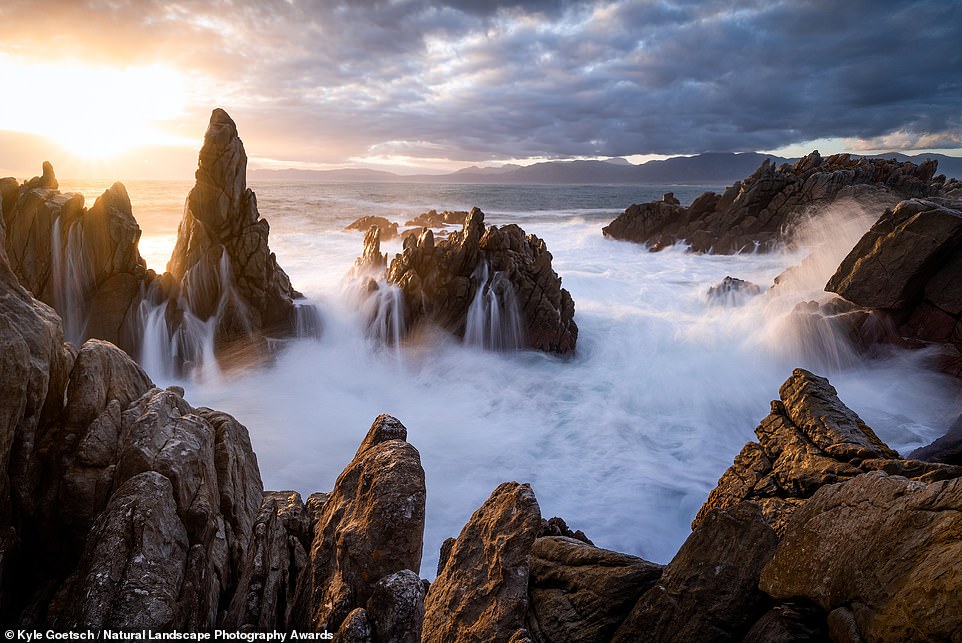 The Strep A symptom EVERY parent ‘should look out for’