The beauty queen who risked her life to reach the UK 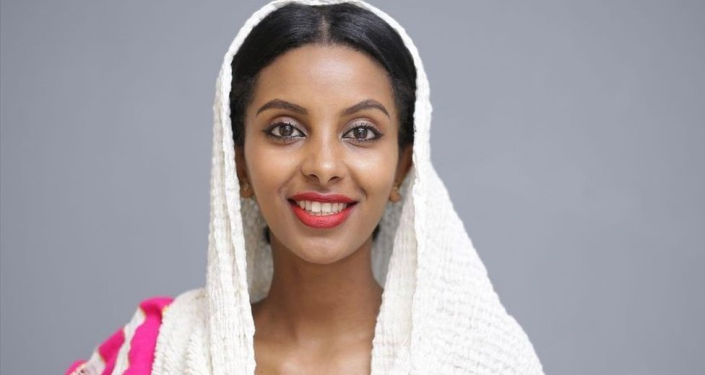 
A famous beauty queen from Ethiopia’s war-wracked Tigray region, Selamawit Teklay, has described her harrowing ordeal crossing the English Channel to seek asylum in the UK.

Ms Selamawit first made her way to France last year, before risking her life to cross the channel in a boat packed with fellow migrants.

Tigray plunged into a civil war in late 2020, resulting in mass killings, gang-rape, and what UN officials described as “famine-like” conditions as food became scarce.

She told BBC Tigrinya’s Line Tsigab why she would advise fellow would-be migrants not to attempt the dangerous crossing:

I had a difficult and scary time to reach the UK. I have seen Tigrayan brothers drown in the sea. I’m a survivor of the English Channel. November 2021 is the month I will never forget in my life.

We first spent nights taking shelter in France. We stayed in bushes in Calais for about two weeks. The cold was severe, no food to eat, no water to sip. It was suffering – endless suffering.

We waited for smugglers to come. Different ones came. We negotiated payment. They carry migrants at night to escape the police.

On the first round when some of my Tigrayan compatriots tried to cross the channel, the boat sank.

Thank God, they were rescued by lifeguards. Those of us who didn’t cross heard the bad news. We were shocked. But we didn’t have any other option. We had to go where we intended.

In a few days, we made a move. It was bitterly cold and the sea was perilous.

We boarded, en masse, a small boat. We were only allowed do what the smugglers told us. We started our voyage to the UK, to secure our lives.

But our journey was not just a journey in the dark. It was pervaded with the darkness of death.

Suddenly the boat’s engine fell into the sea. An Arab man with us jumped into the sea to try to get it out. He couldn’t. Then one of our Tigrayan brothers went in.

He never came back! We searched for him. We heard him shouting. We couldn’t find him. We made desperate calls for help. However, the lifeguards arrived three hours later. Our brother drowned in front of me. I saw his demise with my own eyes.

The Arab man was fortunate. He survived. He managed to get back on the boat.

In that boat, I realised that the decision I had made was wrong. I, and the others survivors of the deadly channel, surrendered to the coast guards who after several hours finally found us drifting in the sea.

Three or four days after we reached the UK, the third round of passengers tried to cross the channel. We didn’t hear good news; all drowned. Two of my compatriots were among the dead. One of them, I knew her from my hometown, Mekelle.

When I started this journey, I said to myself that it can be no worse than what I suffered in Tigray. We’ve seen terrible things back home.

But, to cross this sea is so perilous that no-one should try.

I never thought I would ever leave my country. I never had any desire to. When I used to go abroad for beauty pageants or other work, I always returned home.

Then in November 2020, the civil war that has claimed thousands of lives broke out. We have lost a lot because of this war. It has caused famine, rape and unspeakable suffering. Bank accounts in Tigray have also been frozen, and no-one can get their money.

Displacement, woe and distress were experienced by every Tigrayan. It happened to me and my family as well.

Fortunately, I was not raped like our Tigrayan sisters, but I am injured psychologically.

There was heavy bombardment of Mekelle when the war broke out. We were forced to flee our home, and go and stay in a village. My uncle was killed in Aksum city.

After that I decided to leave.

What I wish for is peace. I don’t feel well. I have lost inner peace. If there is peace, everything is there, everything can be resolved.

I am the only daughter of my parents. I reminisce of when I was a child, of how I used to pick outfits and designs for myself. I remember the time I wore my mum’s clothes and stiletto shoes.

When I aspired to be a model, my parents used to tell me to focus on my studies. However, my craving for modelling conquered me.

When I was 16, I took part in my first beauty pageant, Miss Virgin Mekelle. That was an awesome beauty contest.

When I grew up, I took part in the biggest national beauty pageant, Miss World Ethiopia, in 2015.

I didn’t stop there. In 2017, I vied for the Miss Grand international – 77 aspirants from across the globe competed for the title in Vietnam. It was my first international beauty pageant representing my home country.

I gained some of the top trophies in that contest, which opened up a new horizon of opportunities for me.

Then I competed in another worldwide beauty pageant in South Korea, Miss Beauty and Talent, in 2018.

And what’s more, in 2019 I took part in a beauty and special skills contest in China.

But all our dreams have been shattered. I am now an asylum seeker in the UK; first they welcomed us in a hotel and now they offered me a shared house with some money to pay for food. I am not allowed to work or to move out of this country until my case is handled. I have started life anew.

Currently the UK government is planning to deport some male asylum seekers to Rwanda. The decision is sad. Migrants have made hideous sacrifices to get secure lives in this country. I have seen what the voyage in the dark looks like.