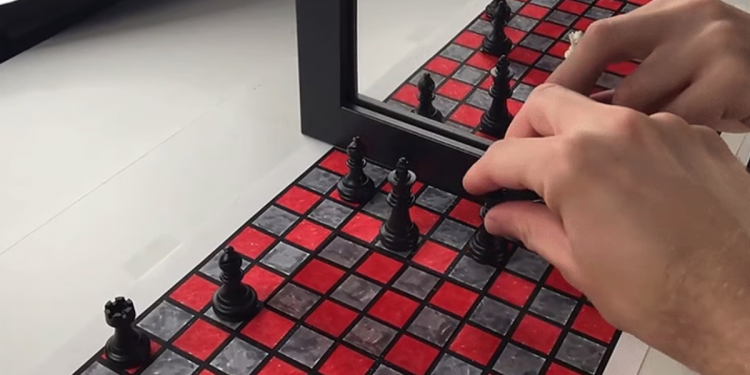 It turns out 2021 wasn’t the mental reprieve we’d all been hoping for after the challenges of 2020, and unfortunately, the finalists of this year’s Best Illusion of the Year Contest aren’t going to leave your brain feeling any less raddled, confused, or exhausted as we quickly approach the new year. As they do every year, a group of talented neurologists, visual scientists, ophthalmologists, and artists have come together to create and celebrate the best optical illusions of the year, and once again their creations will make you wonder if your brain really is completely broken.

First place in this year’s Best Illusion of the Year Contest went to Matt Pritchard of the UK who used a mirror and a seemingly normal chessboard to create the illusion of a phantom white queen chess piece on the board that’s only visible in a neighbouring mirror universe. The secret to the queen’s invisibility cloak is a specially shaped anamorphic shield that sits on the chessboard and masks the piece when viewed from the front but manages to hide its own presence when seen in the mirror as well.

Second place in this year’s contest went to Michael A. Cohen of Amherst College and MIT and it will make you question just how well your mind is able to pay attention to what it’s seeing. The video demonstrates an effect known as gradual change blindness where “observers are unable to notice changes to the world around them when those changes occur gradually.” Over the course of about a minute, an image of a busy room slowly changes several of its details, but most of those changes aren’t noticeable until the observer is presented with before and after images which reveal a stark difference.

Dawei Bai and Brent Strickland claimed third place in this year’s contest with an illusion that demonstrates how our brain’s understanding of the world works can affect how our eyes perceive things. When two spinning rings are positioned side by side but not touching, both rings appear to endlessly spin in 360° rotations. But when the rings overlap, the motions instead appear to be 180° rotations that bounce back and forth, as our brains assume the rings are solid objects that can never pass through each other.

Bringing into question our perception of colour and fashion, Pascal Wallisch and Michael Karlovich’s Crocs & Socks illusion is reminiscent of the infamous “what colour is this dress?” debate of 2015. In normal lighting, people see a pair of pink Crocs worn with white socks to be their true colour. But under green lighting, while most observers see the Crocs as grey instead, some are able to look past the added tint and see both the socks and Crocs as their proper colour. Not every superhero wears a cape.

Human vision largely depends on seeing the edges of objects to discern their complete structure in 3D space, but motion parallax on its own (where closer objects appear to move faster than objects in the distance do) also provides a lot of useful clues to our visual system, as Christopher Tyler and David Phillips demonstrate. When paused, this video simply appears to be a pattern of mostly random white dots, but in motion, our brains instead see a sprawling city composed of endless buildings and a colossal head revealed floating in the night sky at the end.

From afar, it appears as if Olivier and Chloe Redon have created a simple red paper box, but as the observer’s perspective changes, it’s slowly revealed to simply be two sheets of strategically folded cardboard sitting on top of each other.

We’ve seen various interpretations of this illusion before, where participants believe their hand is being maliciously manipulated (think fire, pin pricks, hammer blows) when in reality it’s safely hidden out of sight behind a divider. In this version a blob of green slime next to a mirror makes participants believe their real hand, safely hidden behind the mirror, is being stretched and manipulated in impossible ways.

Kokichi Sugihara might as well be the Michael Jordan of optical illusions, having won the Best Illusion of the Year Contest several times in the past. This year they once again play with how the mirror image of an object can trick our brain, and in this case make objects that are lying down appear to be standing vertically in the mirrorverse.

Through a clever use of wood veneers with varying levels of dark stain applied, Michael Cheshire has created a two-dimensional pattern of hexagons that appear to the human eye as an intricate 3D cube that may or may not be able to actually exist in our universe.

If you’ve ever noticed a set of flickering LED lights bouncing up and down on a moving vehicle while the steady glow of the car’s headlights isn’t moving as much, then you’ve experienced an illusion that Peter Veto describes as a Phantom Wiggle. It’s most often perceived when watching a video of a vehicle in motion and is caused by the appearance of the LED lights being smeared by motion blur from frame to frame. But it has also been perceived by drivers when looking at a vehicle through a rear-view mirror, and the causes of the IRL effect aren’t fully understood.