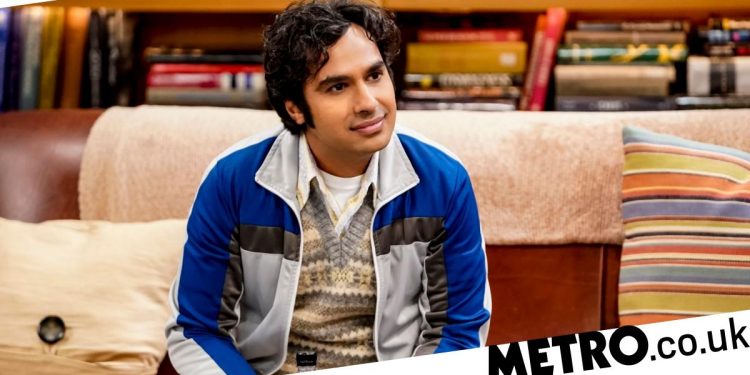 
Fans of The Big Bang Theory are fresh out of luck as actor Kunal Nayyar has insisted a reunion won’t be happening any time soon.

Kunal, you hurt us deeply with this.

Two years after the emotional finale is too soon for the Raj Koothrappali actor, as he told Metro.co.uk ahead of the release of his new Apple TV+ series Suspicion: ‘It’s only been two years since we ended Big Bang!

Giving us a tiny ray of hope for the reunion, he added: ‘Yes, in the future, maybe. But not currently.’

First of all, though, the actor has turned his hand to a much more dramatic role, starring alongside the likes of Elizabeth Henstridge, Tom Rhys Harries and Uma Thurman in Apple TV+’s Suspicion.

The new drama follows five ordinary Brits as they’re accused of kidnapping the son of a prominent US media mogul.

Chatting about what it was like on set, the actors admitted the combination of some pretty intense scenes and filming through three lockdowns in England led to a pretty gruelling time of it.

‘Usually I find it alright, I can switch off, reset, go home, go back in the next day, but because of the circumstances of shooting this show, I actually found it quite difficult because the content was intense – thankfully, the cast were class,’ Tom explained.

‘The cast were close and light and we kept it upbeat in between stuff. Also it was on the backdrop of lockdowns and Covid and I found that really tough.’

‘It was impossible to sustain that intensity in between takes,’ Kunal added. ‘It’s just impossible because you’re fatigued. Given the backdrop of the intensity of what was happening in the world, it did feel like this little cocoon, this little bubble where all we had was each other and that really got us through the shoot and the difficult times we had.’

While the roles were completely new territory for some of the actors, The Americans star Noah Emmerich was on familiar ground playing an FBI agent, after his role as Stan Beeman.

‘It was not a stretch to go back into the FBI!’ he laughed. ‘I’m definitely open to doing different characters but it’s great to have all the work I’ve done in the past come to bear on this.

‘I didn’t have to learn about what it’s like to be an FBI man because I’d already done that work so I was excited because that was a burden off my shoulders. I had a head start!’

Noah added of working on the series in the midst of Covid uncertainty: ‘I was incredibly grateful for it because it was a life raft. As we were huddled in our homes isolating, wondering what the fate of the world was, we knew we had this to come back to.’

Suspicion is out on Apple TV+ now.