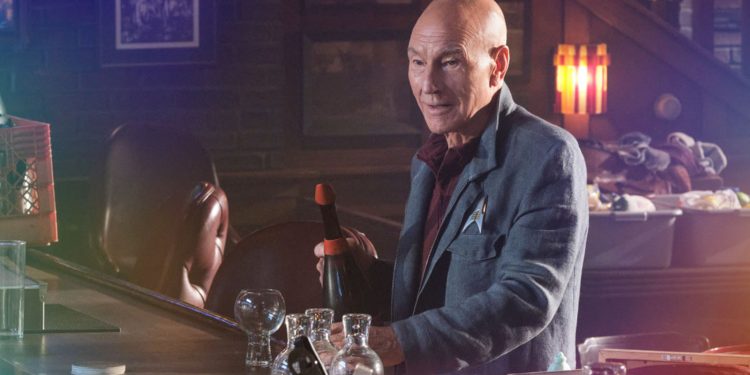 
Interestingly, the writer of “Assignment: Earth,” Art Wallace, and Trek creator Gene Roddenberry, briefly pitched the basic premise of the Supervisors and Gary Seven as a futuristic agent on present-day Earth as a full spin-off series to Star Trek. Seemingly, one early version of the episode was a stand-alone pilot for a series without a Trek connection.

Had it been picked up, the “Assignment: Earth” show would have been the first spin-off of Trek, which, if you squint, is kind of what Picard Season 2 is doing now. Fingers crossed for a new Gary Seven and his cat Isis, at some later point in Picard.

At the very end of the episode, Q (John de Lancie) is sitting outside of something called “Jackson Roykirk Plaza,” which seems to be connected with the “Europa Mission,” which we’ve seen a few billboards for in and around 2024. As far as deep-cuts go, Jackson Roykirk is pretty deep. The name comes from the TOS episode “The Changeling,” in which we learn that Roykirk was responsible for the AI space probe called Nomad, which, in the Star Trek timeline, was launched from Earth in 2002. In “ “The Changeling,” the Enterprise encounters a highly modified version of Nomad, which at some point had merged with an alien intelligence called Tan Ru.

But, since that Starfleet-centric future is all hanging in the balance, what’s most interesting here is the way the existence of Jackson Roykirk Plaza seems to establish his importance to the Trek-version of the Early 21st-century space programs. In Star Trek “history” Jackson Roykirk would have been a big space probe guy in 2002, which means, 22 years later in 2024, it seems reasonable there would be a space-travel plaza named after him.

Jackson Roykirk only appeared in canon as an archival photograph in Spock’s library computer and was “played” by frequent TOS director, Marc Daniels. Presumably, Jackson Roykirk could still be alive in this version of 2024, but, if they named an entire plaza after him, probably not?

In the same scene at the end of “Watcher,” Q is speaking and seemingly trying to implant a suggestive notion into a young woman’s mind. The woman (Penelope Mitchell), who appears to be wearing a shirt associated with the Europa Mission, is reading a book called The Pallid Son by Tracy Tormé.